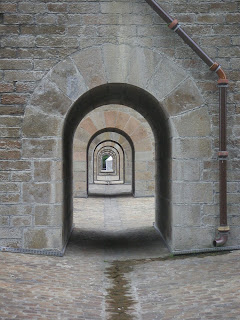 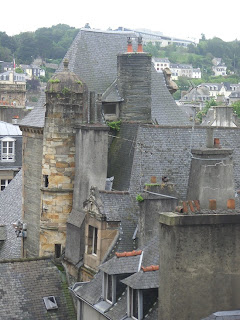 Morlaix is famous for its viaduct, built in the early 1860s to carry the Paris/Brest railway. It was an obvious target for allied bombing in WWII to break the Germans' vital communication line. A raid in January 1943 succeeded in knocking out part of one arch, as well as destroying a primary school, killing all the pupils and a teacher. 12 days later the Germans had the line repaired.
Posted by WM at 8:16 pm 1 comment: 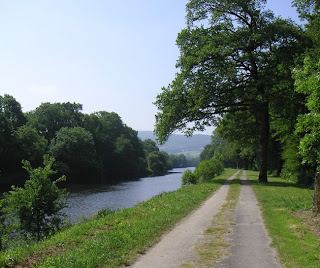 The Long Thought will going to press in a month or so and I'm starting work on the covers. I'm torn between symbolic wintry pictures or June splendour showing the canal at its best. This picture is my current favourite: it also connects to the opening scene of my new novel, which would be a neat transitional image. The infinite variety of the Nantes-Brest canal requires a whole book of photos to do it justice, but I've decided to do without pictures in the text, which can stand up for itself well enough, I hope.
Posted by WM at 5:34 pm 3 comments:

A reporter from Ouest-France, the main daily paper here, accompanied a Morlaix town walk I guided last week. He was a young man who admitted he did not know the history of the town. All the more reason for him to listen? Not a chance, he's a journalist after all. The next day he sent me a PDF of the article - full of errors and misquotations, but I expect that after long experience of being interviewed by the French press. You accept these colourful diversions from the truth in return for publicity.
I was just about to file the article and think no more of it when I spotted the photo caption: there I am, on the bandstand in the Place des Otages, explaining the tragic fate of 60 Morlaisiens taken hostage and then transported like cattle to the death camps in reprisal for a resistance attack. What does the caption say - that I am describing the hostages being SHOT. Now not only is this a nasty slur on my reputation, but it is pretty unpleasant for the families of these poor men - Morlaix is a small town and this terrible event features large in many memories.
So I send an email at once to the journalist, Morgan Bourven. No reply. After brooding all weekend, I write a letter of complaint to the editors. Shortly after the journalist sends a brief email of apology and says a retraction will be published in the paper the following day. It isn't, so I write to him again, this time in anger. He replies blaming a secretarial error (!) and promises the text will appear tomorrow. Half an hour later he sends me the text to see if I approve. Frankly I think it is very little, but it includes a public apology to me as well as a correction of the facts, so I say OK.
Today, the retraction appears, but lo and behold! the apology has mysteriously disappeared and only a bald statement of fact remains. Anyone reading without significant attention might still have the impression that the mistake was mine. I am seriously upset by this - by their stupidity and ignorance in the first place (no-one in the Morlaix office of Ouest-France noticed such an appalling error before the paper went to press) and then the apparent play-acting that followed.
I think the best thing to do with Ouest-France in future is to stuff it in my walking boots to help the drying process.

POSTSCRIPT I have just received a message from the journalist saying that it is an 'apology to history not to Wendy Mewes' - there you are, folks - NOW they care about history, but they don't give a shit about my professional reputation. If I was French it would be a very different story.............. but at least this shows them in their true light.

ADDENDUM: after reading Laurent's comment and receiving another message from the journalist, let me say that he, Morgan Bourven, tried to do the right thing but was overruled by more senior staff who did not feel I was important enough to merit an apology.
Posted by WM at 11:47 am 4 comments:

Portrait of the Young Dog 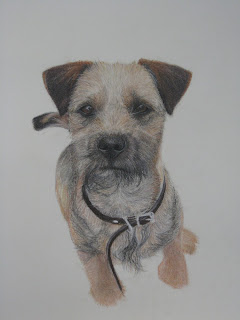 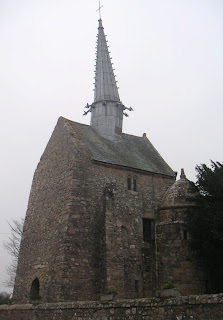 Personal reasons have kept me off-blog lately, but I'm getting going again this month. Starting work on a new novel, Walking for the Broken-Hearted, which in its embryonic state appears to be a strange amalgam of fiction and reality. Also working on the development of an historic trail throughout Brittany, tracing the Briton/Breton connection over centuries. This is essentially a tourist project, concentrating on places and remains, but I expect a guidebook will accompany the basic leaflet information.
Otherwise BWs association business takes much of my time, with new walks to research and a programme of events for the autumn/winter to plan. There can't be many Morris dancing workshops on offer this December in Brittany. Plus the total reworking of the Brittany Walks website, which is going to be a big step forward for anglophone walking over here, and a major task for me.
Posted by WM at 9:09 pm 3 comments: