The island of Ouessant 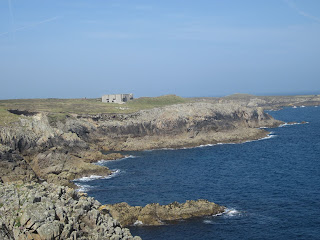 It's been a busy time with various guided visits/tours and translation work, whilst moving house, with all that brings. I recently enjoyed a great visit to the island of Ouessant, taking a small group to see the dramatic landscape of this westernmost outpost of Breton territory, 25km out into the Atlantic from the coast of the Pays d'Iroise. We left from Brest for a three hour voyage out, stopping at mainland Le Conquet, then the tiny island of Molène before crossing the turbulent waters of the Fromveur towards Ouessant. It's odd to arrive in an isolated port without houses, commerce or bars, but only stark cliffs and the towering radar tower that protects the Rail d'Ouessant, keeping large freighters at bay. Le Stiff, the oldest lighthouse in Europe (Vauban's idea in 1695) peeps out above the headland. 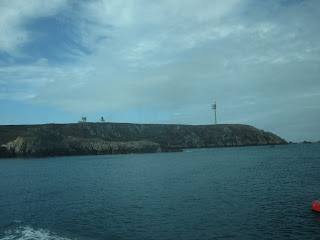 We were staying on the edge of Lampaul, the only village, at the other end of the island. Its name reflects the tradition that Welsh saint Pol Aurelien made land here and initiated a spirited confrontation with pagan practices, determined to break up a sizeable cult centre. Decades of archaeological investigation at Mez Notariou have offered some insights into the nature of island worship from the Bronze Age onwards. The results can be seen in an exhibition in the Museum of Lighthouses and Signalling, located in the iconic black-and-white Phare du Creac'h. 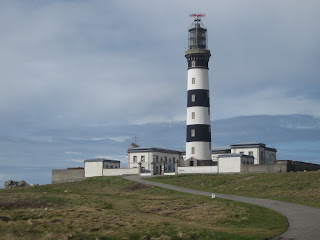 In the bourg, we visited the church and cemetry to see evidence for the proella, a sad ritual made necessary by so many lives lost at sea as the menfolk from the island habitually served in the French navy. A small wax cross was treated as a symbol of the dead, with a vigil at the family house, a procession to the church, the placing of the cross in an urn until a bishop's visit for a formal blessing, and then the 'resting-place' of the cross in a special tomb in the cemetry, the only structure aligned north-south in contrast to the graves which all lie east/west. 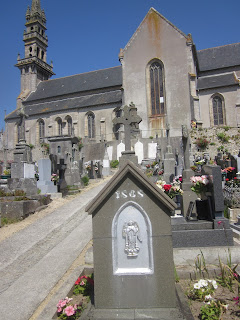 Mostly we walked the coastal path, surrounded by lighthouses and the sites of countless shipwrecks, whose origins indicate the location of Ouessant at the epi-centre of international trade over centuries. In 1937 the Greek ship Mykonos went down off the northern shore (remains can be seen at low tide at the Baie de Calgrac'h), releasing a cargo of fat white sheep which some enterprising local took advantage of, with the result that traditional scraggy, hardy black Ouessant sheep are a rare sight in their home territory.
Ouessant is an exceptional place for walkers. My new book Walks in Finistère contains a feature with full maps, suggested routes and places of interest along the way. The island offers nearly 50km of coastline and plenty of inland paths through hamlets, marshes and moors, mostly with views of the sea on the horizon. 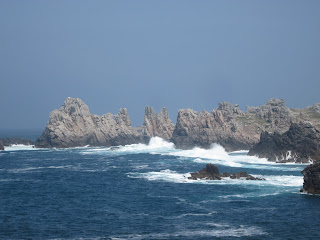