St Pol and the dragon 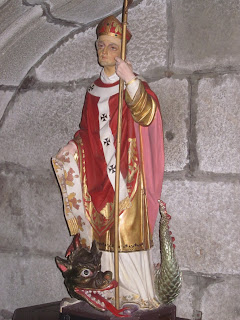 The iconography of St Pol (Sant Paol in Breton), one of the founding saints of , shows the saint with a dragon beneath his feet. The reference is to an event on the Ile de Batz, in the area where he came to settle permanently, witnessed today by the nearby mainland town of with its cathedral commemorating St Pol as the first bishop in the early 6th century.

St Pol began his religious career in , studying at the prestigious monastery of Llanwit Major. From a noble family, he was marked by his piety from an early age, although the evidence for his later life suggests the uneasy mixture of asceticism and missionary zeal not uncommon in the early Breton saints. After a sojourn with King Mark in , where he was refused a bronze bell to take to his new land, St Pol sailed across the Channel to confront the pagan population of western with the steady truth of Christianity.

This focused purpose is suggested by his first landfall on Ouessant, a remote island in the off the north-west . Here there was a well-established pagan cult centre, a group of priestesses that St Pol is said to have forced from one end of the island to the other. A cross on the cliffs marked his first landfall, with a nearby stone bearing the imprint of his knees at prayer. The name of the only sizeable settlement on Ouessant today is Lampaul – the holy place of St Pol. 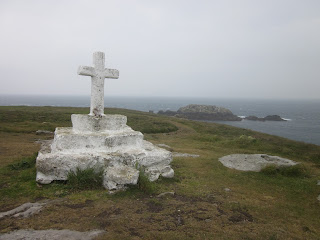 Further place-names reflect the saint’s traditional journey eastwards across what is now Léon, the northern part of Finistère: Lampaul-Plouarzel, Lampaul-Ploudalmezeau, the chapel of Prat-Paol, Lampaul-Guimiliau and finally St-Pol-de-Léon. Here St Pol is said to have had a positive interview with local count Withur (who may have been a relation), and received land on the Ile de Batz, just off Roscoff. Here he founded a monastery on the site of what later became a chapel to St-Anne, still visible in ruins on the island now.

The Ile de Batz was terrorised by a marauding dragon and the inhabitants approached St Pol for help. He is said to have called the beast out of its lair, placed his bishop’s stole around its neck, led it to the western edge of the island and commanded the dragon to hurl itself into the sea. It obeyed. The place today is called Toull ar Zarpant, Serpent’s Hole, and a striking rock formation marks the bay where this remarkable event took place. 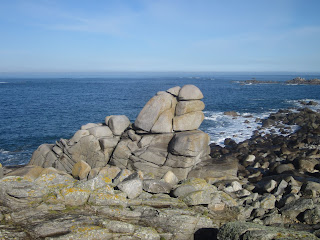 In the village church, a medieval bishop’s stole is displayed in a glass case, echoing the most memorable feature of the story, a wild beast led like a tame dog to its death. The fabric has been tested and is very early, possibly 8th century, alas too late for St Pol himself who died near the end of the 6th century at the great age of 102. 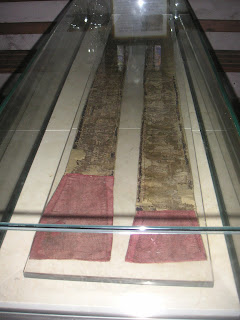 He had wanted to continue a quiet monastic life on the Ile de Batz, but was tricked into becoming a bishop by Withur who sent him to in with a note requesting his episcopal consecration. Thereafter he cleared more wild beasts from the Celtic site of Occismor and founded what later became the cathedral and town of St-Pol-de-Léon. Official life was not congenial to St Pol who made several thwarted attempts to retire to the Ile de Batz before he was finally allowed to live out the rest of his long life in peace there.

The dragon story overrides all other tales of St Pol’s miracle-working, such as healing the blind and commanding the sea to respect a boundary he had set, the powers that set him apart from other Christians in his group of settlers. It is surely the detail of that wild monster behaving like a family pet that sticks in the memory and makes the story curious. Another interesting detail, often overlooked, is that the saint took a companion with him for this feat, a certain knight from Cléder. The implication of a knight is of course a warrior with a sword, which sounds suspiciously like an insurance policy or back-up plan. Did St Pol want a witness? Or perhaps a muscle-man if things did not turn out to his advantage. Did the islanders turn out to watch a potentially thrilling contest or cower in their huts until the danger was past? An observed miracle and a reported one are markedly different things. 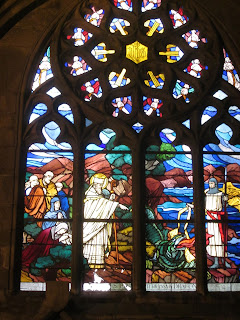 If the dragon, so vividly described in the Latin text of an early Vita of St Pol, written by Wrmonoc, a monk at Landévennec in 884, symbolized pagan religion, the worship of natural forces and elemental powers, it was perhaps apt that it met its end on the western shore, a direction associated with death and the Isles of the Blessed in Celtic mythology, here where the sea stretches emptily and endlessly into the far distance. The bay is crammed with rocks of all sizes today, dominated by the vaguely beast-shaped pile of giant stones at a point exposed fully at low tide. The sea of course has resurrective potential in pagan mythology, so the beast may not have been reluctant after all, and needed little bidding to opt not for destruction but regeneration, and a welcome release from the irritating goodness of Christian saints. 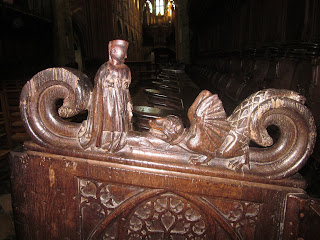 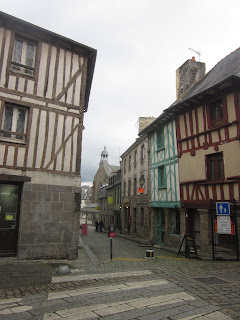 Spent the weekend in St Brieuc and the environs. I fear I shall never like this dull town with its tortuous traffic arrangements, incohesive centre and claustrophobic streets, despite a scattering of handsome half-timbered houses. The cathedral, built with defence in mind, has a dour and forbidding exterior, hardly enlivened by the gloom inside, the unadorned walls punctuated by bishops' tombs. Certainly the building was badly used at the time of the Revolution, but the interior still seems inhabited by the miasma of an unholy trinity: defeat, loss and martyrdom. 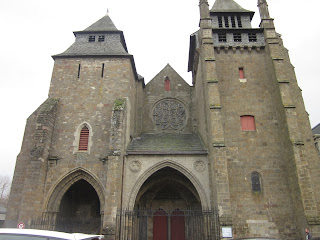 The Bay of St Brieuc is an open relief after many attempts to leave the town are thwarted by poor signage and roadworks further confusing an already baffling one-way system. The tourist office had provided me with maps for my visit to the bay area. Unfortunately, these did not include minor roads so finesse of direction was tricky. It's a long time since I explored this area for the Footprint Brittany guidebook, but I had various goals in mind, thinking about the new book and old pathways. I drove along a road based on the Roman route towards Corseul, capital of the Coriosolites in Celtic times, before branching off along a beautiful curvy split route with trees on both sides and between the carriageways, to the small bourg of Hillion with its appealing Romanesque church, 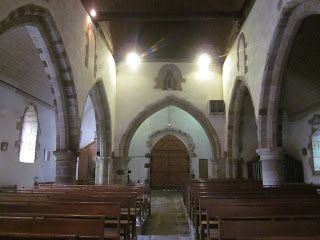 I then walked the coast path beyond the look-out point at the Maison de le Baie. It's a weekend of high tides and this bay is famous for one of the longest recoils in the world, when the sea retreats for up to 7km. It was out for me, so there was plenty of bird-life on the exposed bed, including a flock of Tadornes de Belon. I'm fond of this chunky bird whose peculiar markings make it look unfinished, a work in progress. 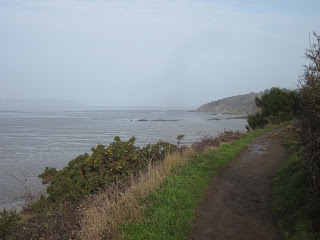 Moving inland and onto the high ground in the commune of Yffiniac, I found the Fontaine des Sept Saints beside the little chapel of St Laurent, tucked unobtrusively into the hilside beside a huge racecourse. In this case it is seven healing saints, not the founding saints of Brittany, nor the sleeping saints of Vieux-Marché. It just goes to show the insecurity of the historical evidence for the Tro Breiz pilgrimage. References to the the Seven Saints exist in  various documents, but which seven is far from clear. Here it is Guenolé, Jacut, Lubin, Tugdual (Tudwal), Méen, Cadoc and Armel, each patron of their own speciality disease, from rabies to eczema. 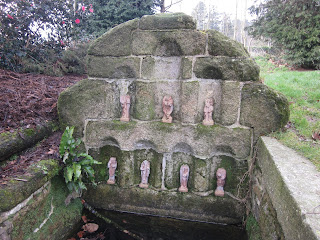 Last stop was Ploufragan to search for three ill-signed neolithic monuments. After two, the bitter wind got the better of me and I headed home. The highlight of my weekend was without doubt having the swimming pool at the beautiful appartments where I stayed (Domitys Le Griffon d'Or in St Brieuc) all to myself on two occasions. 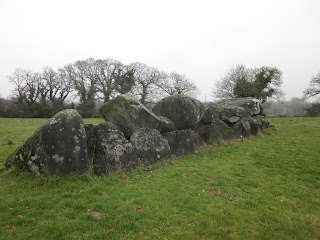 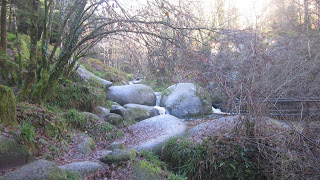 I wrote a long post at the end of January about what a frustrating month it had been and then could not get access to my blog to post it! February has begun with the same pattern of  set-backs and obstacles, although the weather has changed from the beautiful freezing sunny weather so perfect for walking to storms, hailstorms and persistent rain. I have spent a lot of time doing translation (Arthurian research by Christophe Deceneux) and waiting for translation pieces booked but never appearing and thus storing up further frustration for this month. I have been let down in a most dishonourable way by a contractor who was to do major work at my house (and I've been waiting five months for his services already. Still, my father always told me never to trust an Englishman ;-)).
Two articles have been written, two interviews given and a very successful launch of my new book enjoyed, but all I really want to do now is have clear time to get on with the next. Finally the French translation of Spirit of Place is done and at the printer, well in time for the February 19th launch, but getting it done has been a very rough ride.
Both my lap-tops are malfunctioning, the elder through exhaustion and the baby, initally my pride and joy, for no reason capable of analysis. It has been nothing but trouble from the set-up and I tend to do no more than leave it alone in its smart new case and make notes on scruffy bits of paper. Things can only get better. This week I am teaching a course about the Tro Breiz to lovely people in a lovely place and having a session with my lovely personal trainer, and maybe an island trip, so nothing to complain about at all... I am also incredibly pleased by and grateful for all the really wonderful comments on the new book. The theme has clearly struck many a personal echo.