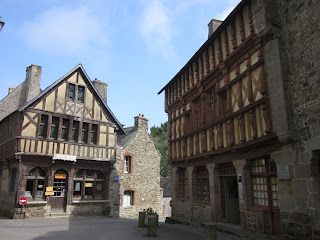 I've been in Tréguier, one of my favourite places in Brittany, for some research on the rationalist philosopher Ernest Renan, and more specifically the clash between the religious establishment and progressive Republicans in 1903 when a statue to the great man, flanked by Athena, goddess of Reason, was provocatively erected opposite the entrance to the cathedral. This building is associated with Tugdual (or more accurately Tudgual), one of the seven founding saints of Brittany from the Dark Ages, and later with Saint Yves, whose tomb and grinning skull lie there. The latter is the patron saint of Brittany and was an historical figure from the 13th century (d1303). His reputation as a priest and ecclesiatical judge was that of one predisposed towards the poor and disadvantaged. Odd that he is now the patron saint of lawyers, who come from all over the world to celebrate the Pardon on May 19th. Yves is also that rare thing - an 'official' Breton saint, canonised by Pope Clement VI in 1347. 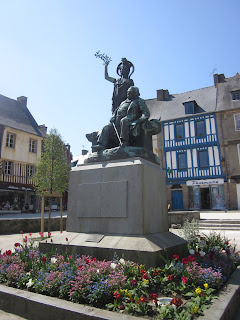 Both St Yves and Renan are sons of Tréguier (600 years apart), offering me a profitable juxtaposition for the new book. Renan's great sin was to present Christ as a 'very remarkable man' (and not the divine son of God) in his lectures and book The Life of Jesus, published in 1863. This led to suspension from his teaching post until the Republican govenrment of 1870 reinstated him. The vicious caricatures of Renan with the Devil's horns and pictures of armed soldiers trampling good, honest citizens to the floor during the confrontations of that wet day in 1903 reflect the often violent polarisation of state and church during the later part of the 19th century, resulting in the final separation in 1905.
The immediate response of the Catholic Church to Renan's statue was to commission the last great calvaire in Brittany, erected on the quay of the Jaudy river at the foot of the hill leading up to Renan's family house and his statue. This lavish monument (complete with lists of donors) is called both the Calvaire of Reparation or the Calvaire of Protestation, depending on your religious stance. Renan's earlier spiritual advisors - for he had been intended for the priesthood, only experiencing a crisis of faith at the very last moment - refused to join the outcry about his book in the 1860s, retaining their affection and respect for him to the last. 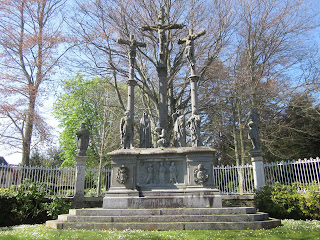 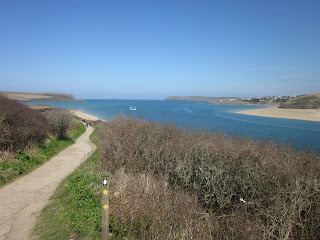 Great trip to Cornwall, walking the Saints Way with a friend (the Cornish artist Haddow, www.haddow-art.com) and publicising my own Saints Shore Way book, which details a long-distance walking trail on the north coast of Brittany conceived as an extension of the Cornish route.
The Saints Way (Padstow - see Camel estuary above - to Fowey) took form in the 1980s from the discovery of ancient granite stiles in a valley near Luxulyan. These were probably part of an old drovers route but they gave the idea of a north to south coast path that earlier migrants may have followed to avoid dangerous seas around Lands End. The path today connects many Celtic crosses and churches to give character to the saints' theme. From the harbour at Fowey, these Dark Age pilgrims set sail for Brittany, or ultimately for Jerusalem or Compostela. 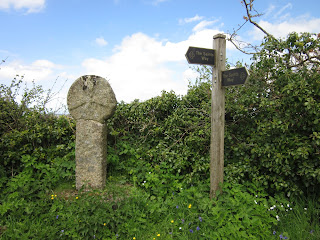 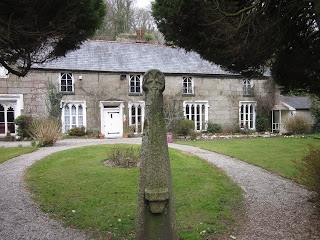 Our two day walk was slightly marred by driving winds which made lingering on the heights of Saint Breock Downs an unattractive prospect, but we had a restorative night at the excellent St Benets Abbey hotel/B&B. I had quite forgotten the old problems of walking in England with dubious directional arrows across fields, farmyards to avoid and bulls in waiting. We don't have any of that in Brittany, which certainly simplifies matters. Give me track walking any day for ease of nagivation and that welcome give underfoot - there was too much road slogging in the Saints Way for a fairly short route (42 kms).
Also managed quick visits to Penzance and St Ives in the rain before a very welcome meeting with John Fleet of CERES (Centre for European Research within Cornwall) in Truro. Overall it was a fine experience and I added a couple of days in London with my nearest and dearest thanks to the overnight sleeper train from Truro to Paddington. Have to say though, it's good to be home in France.
Posted by WM at 10:39 am No comments: 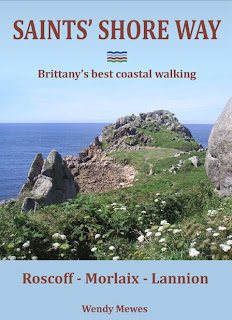 My new book The Saints' Shore Way is out at last - a project with the Baie de Morlaix tourist board supposed to last three months that has in fact taken up eight and caused me all manner of hardships. It has certainly been an eye-opening experience to see how tourist organisations work in terms of project development.
The guide gives maps, directions, sights and themes for a 133km route between Roscoff and Lannion, via Morlaix, mostly on the coastal path. It's a week's walk, accessible without a car as it starts from Roscoff ferry port and there's a good train service back from Lannion. The cover, designed to say sea, summer, dramatic rocks and lonely paths away from it all, has been a hit. Even the English distributor emailed to say it made one want to be there at once. The whole book looks and feels great, so all that meticulous work on the page lay-out and design was worth it in the end.
As I've sold my rights, very cheaply as things have turned out, the sales are not a direct concern, but I've done a great deal of publicity here and in England to help things along. Pity it is quite late in the season for planning holidays, especially with Easter so early. I'm doing a tour of some of the highlights for the AIKB in May and publicity in Cornwall, because of the connection with the Saints Way there, before that.
Posted by WM at 1:56 pm No comments: