A chink of light

Much heartened by listening to Michael Dodds (new head of tourism in Brittany) speak in Carhaix last night. The mix of focus and vision he outlined should have breathed some life into those of the large audience with ears to hear. Quite a few came simply to make their own mini-speeches and then leave, an indication of the narrowness of perspective that bedevils the whole show. Diversity is certainly the essence of Brittany's strength in the competitive tourist market, as I have been preaching for the last seven years - in fact it's conceivable that every person involved in every level of promotion and services here might agree on that. The problem is that that very diversity engenders a fragmentation of vision and a tightening of self-interest and parochial values that ties the whole parcel up in impossible knots rather than unwrapping it seductively for the punters. If people would only stop harping on about what they have and concentrate on what they can give, we might all get somewhere. The common ground or at the very least a modular connection between divergent interests is worth striving for.
I'm starting to work on a Food in Finistere themed trail which will promote by linkage a wide gamut of cultivators and producers: whether I can stir the least interest in relevant tourist organisations remains to be seen. But personally I felt yesterday that at last all my efforts might be reflected on a bigger stage by much more influential people, and that maybe I was in the right place at the right time after all.
Posted by WM at 11:06 pm No comments:

After the tedium of the Council of Trent and the furor of the Wars of Religion, Brittany was well set for a religious revivial in the early 17th century. The magnificence of the parish closes and the outbreak of convent-building (Ursulines, Carmelites, Calveriennes, etc.) are well-known, but less attention is given to the widespread activities of missionaries in the region.
Michel le Nobletz from Plouguerneau, called the Lunatic priest for his eccentric delivery and semi-masochistic lifestyle, devised the use of "taolennou", pictorial maps of faith painted on sheep-skin or sometimes wood, to reach the minds and souls of illiterate Breton peasants who had wandered from the Catholic fold or never been rounded up in the first place. These proved remarkably effective and his relentless efforts over many years throughout Basse Bretagne did much to regenerate the religious devotion which has somehow wormed its way into the fabric of Breton identity.
But the man he chose to succeed him in this noble work, Julien Maunoir, came from eastern Brittany, north of Rennes, and therefore was burdened by the fundamental handicap of not speaking Breton. Fortunately God intervened at this point, and as Maunoir prayed in the Chapel of Ty Mamm Doué, an angel appeared and touched him on the lips, giving him the gift of that bythronic language. A huge painting in Quimper cathedral records this miracle.
I can just picture the scene as he toiled away by candlelight each night with a grammar and the help of a real Breton servant. 'No, your reverence, I really think you must labour a little more at those mutated consonants before we announce the angel's visit.'
One can't help admiring those tricksy Jesuits.....
Posted by WM at 4:35 pm No comments: 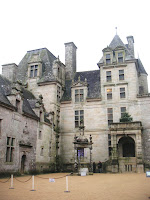 Currently working on promotion for this chateau, which deserves attention not only for the architectural and historical interest, but also for the fine presentation of the site. They have a creditable and clear vision of integration between the essential value of the building itself and its use as a context for presentation: excellent exhibitions, shows, performances, etc.
The new offering for 2009 looks at festivities and celebrations from the Renaissance, promising fun and lively information in a carefully staged setting. Rites of passage, religious festivals, tournaments and Carnival all lend their colours, lights, sounds and tastes to this highly recommended exhibition, which opens on March 27 and continues until November 8th.
Posted by WM at 6:26 pm No comments: