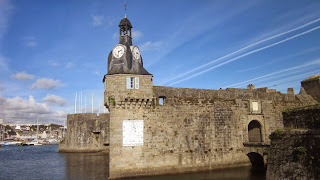 Sunny visit to Concarneau today and very pleasant to experience the walled city without the usual summer crowds.
Posted by WM at 10:16 pm No comments: 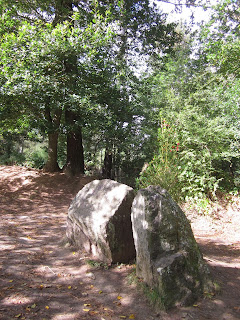 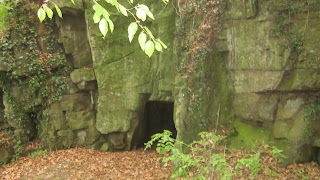 Which of these do you think makes the best tomb for Merlin? You might like to bear in mind that he was supposedly trapped forever in a grotte. The top picture is so-called Merlin's Tomb from the forest of Paimpont, heavily marketed as the Brocéliande of Arthurian legend (for no very good reason). It is in fact the remains of a neolithic dolmen. There are no caves in that forest, so nothing can be made to fit in the way they've managed with the Valley of No Return (nice valley, shame it was once publicised somewhere else entirely until a factory was built there). The second photo shows a veritable grotto, tucked under the rim of Mont Dol near Dol-de-Bretagne. This area on the eastern edge of Brittany was once covered by a great forest. And wait a minute! Wasn't Brocéliande supposed to be near the sea and in the Marches de Bretagne?
Of course Brocéliande is a literary creation, first mentioned by Wace in the 12th century Roman de Rou. He was a Norman with Plantagenet patrons, just up the road from Dol and Combourg, once in that eastern forest. He said he visited the forest himself. And Geoffrey of Monmouth who started the whole Arthur saga in its recognisible form today may also have ties with Dol. But no-one could possible doubt all the hype surrounding the Arthurian forest of Paimpont - could they?
Posted by WM at 11:19 am No comments:

All around the forest 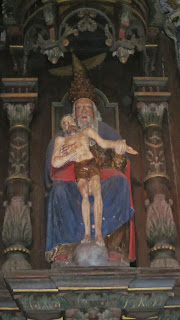 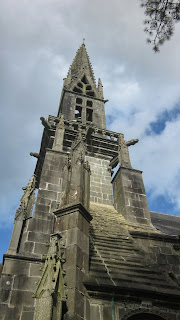 Working on a short text about Cranou at the moment, so yesterday had a great day out and about the forest with friends. We had a very good lunch in Le Faou (haddock in crab sauce with puff pastry filled with sautéed leeks) before visiting one of my favourite churches in Finistere at Rumengol. Then we gave the dogs a good walk up and down the beautiful forest which once supplied wood for building ships for the French navy at Brest.
Posted by WM at 11:42 am 2 comments: 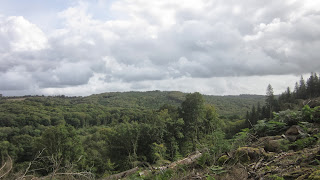 After an intense period of work glued to my office chair - except I am now working half the time standing up, which is fine if the computer is at exactly the right level - I really enjoyed lunch at L'Autre Rive today, followed by a long peaceful country walk with my good mate Jude. I'm working on the forest chapter of the book, so this kind of scenery was perfect, even if far from my featured forests.
Pleased to receive the new edition of Voyage (Brittany Ferries magazine) this morning, with my article on what to do in Brittany in winter featured. The suggestions are for visits and festivals, but it's not a bad time for a short break holiday or a few days walking, with careful choice of location. And my favourite season, but then, I'm a true child of winter.
Posted by WM at 5:39 pm No comments: 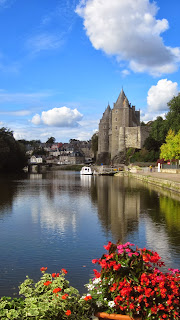 I've had three days away, partly in Malestroit for a book fair and partly pursuing another river, this time the Oust. As much of its length forms part of the Nantes-Brest canal, the Oust and I are already pretty good friends, but I've enjoyed revisting some highlights - Montertelot, the lock at Beaumont where I was filmed for French TV years ago, the sweep round into sight of Josselin castle (above), etc.
I stayed in Malestroit with friends Jean and Adrian who have an excellent B&B (www.alamaisonblanche.eu) in the centre of town and right on the towpath, so I could sleep to the sound of the Oust dashing over its weir opposite the house. Finished up today at the Bosméléac barrage and the upper reaches of the river towards the source near Haut-Corlay. What a lovely river it is, and what lovely people I've met in Malestroit at the very well-attended book fair. Michel Hidalgo, famous French footballer and former national team manager was the star, with people queuing all day to shake his hand and have their photos taken with him, fathers bringing sons and grandfathers their grandsons just to see a legend of the game ... great to watch all the reactions. Also Yves Arnal promoting his book La Caravane du Tour de France, a history of the publicity machine behind it all - his wife Isabelle was a delightful 'neighbour' for me (not to mention their very pretty little dog who entertained Tex during the day).
Posted by WM at 7:35 pm No comments: 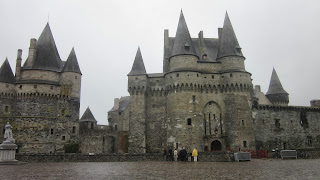 Really quite sad to be back from my month in eastern Brittany, not even roused by sights of misty/stormy Monts d'Arrée which welcomed my return. Only back a few hours and my beloved coffee machine is broken, internet problems causing frustration, rotting mouse corpse in my office causing terrible smell, taps dripping, same old traffic noise, etc. After weeks of silent working space in beautiful surroundings and lots of trips to interesting, lively places, stunning castles (Vitré pictured) all around and the chance for regular Rance walks with my dear friend Lesley, it all feels very flat today. As I left Combourg yesterday my lovely landlord Lionel handed me a bag of peaches, yes PEACHES, from the garden to remind me of that wonderful, serene (apart from Tex and the six cats scenario) space and all the kindness I received from all those who helped with my research.
Posted by WM at 2:26 pm No comments: