I am currently writing about Morlaix in the context of roads and pathways for my new book, which has reminded me of all kinds of negatives about this beautiful historical town, so here let's focus on something more alluring. The town has a unique architectural form, the maison pondalez, narrow, half-timbered, high-storeyed houses, offering an unparalleled glimpse into the 16th century life of the city. Often likened to lantern houses, they did not in fact originally have roof level light-sources, with windows serving both front and back rooms alone. The great central well, rising the full height of the house, had a monumental fireplace and would have been lit with sconces. The name pondalez is of uncertain derivation, the traditional 'pont' + 'aller' in reference to a single turning staircase with wooden 'bridges' to both sides on each level, is now largely rejected in favour of the nothing in particular. Wood carving is a feature of the exterior with saints and angels dignifying the façade, and the interior where ornate single piece stair-posts rise to an enormous height. The jettied storeys have rooms on each level with small-paned casement windows seemingly only feet away from their opposite neighbours across the tiny cobbled streets of the old walled city, sacked by English raiders in 1522. 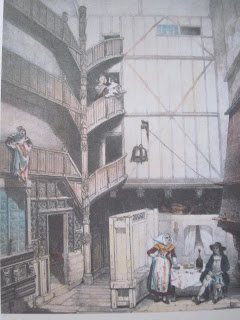 Most interesting of all is the raison d'etre of these exceptional buildings. They were the fine residences of nobles turned merchants, officially surrendering the swords that symbolised their status in order to cash in on the highly lucrative cloth trade with England. The quality fabric créées was purchased in the shop-fronts of these Morlaix houses (with a fold-down counter on ground level) and shipped from the river port 200m away. Often younger sons of the Breton petite noblesse had few prospects in terms of family inheritance and stood to make fortunes in commerce, but they still wanted the trappings of the manor houses in the narrow confines of a medieval town - hence the narrow frontage and great height of these splendid residences, and the quality of craftsmanship in their construction and decoration.
Two of these houses can be visited today. The so-called House of the Duchess Anne in the market square Place Allende and 9 Grand'Rue. The latter would be my choice as more atmospheric and clearly presented. Just the thing for getting in the spirit of the town and imagining that attack in 1522. A maid in this very street had the measure of the English: she opened a trap-door in the hall and the first few pillagers fell into the cellar and drowned. Their less stupid comrades chased the maid up and up the stairs until she was forced to throw herself from the top window. That piece of anecdotal history takes on quite another dimension when mounting the levels of this maison pondalez.