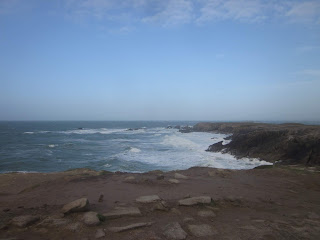 On Boxing Day I took my last trip for the new book, a walk down the wild coast of the Quiberon peninsula. Thin wintry sun alternated with grey skies, high winds lashed constantly, hard to stand against at times, and whipped the sea into a foaming, surging mass in the small bays. The cliffs are of modest height, which enhances a sense of engagement with the watery assault, as spume flies high over the rocks and little snowballs of foam splatter all around.
The pinchpoint of the promontory is only 22m wide, enough to carry the main road and a railway that joined Quiberon to Auray from the 1880s. Until the 11th century the Presqu'ile was a real island, but widespread deforestation led to the sanding up of a narrow spit or tombolo to join the mainland. The landmark Fort de Penthiévre was built in the mid 18th century after English raids on Quiberon, but it played a better known role in the disaster of 1795, when briefly held by royalist emigrées who had landed near Carnac but then been forced back onto the peninsula by the Republican army. 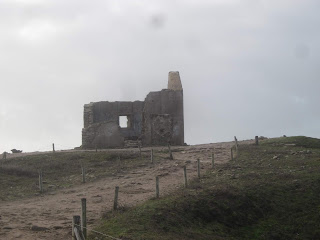 From the little fishing village of Portivy, I cross the Plage du Fozo and then fight the wind up onto Beg en Aod, an Iron Age eperon barré possibly attacked by Caesar before his naval victory over the Vénètes in 56BC. The next headland, Pointe de Percho is dominated by the ruins of a corps de garde. This coast is all about attack and defence, in both natural and human history. Contrasts are everywhere: the famous arch of Port Blanc, eroded by wind and water, stands near a pair of neolithic graves dramatically poised by the hand of man on the cliff-edge. 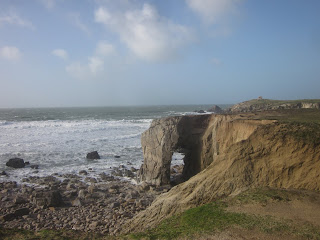 Further down the coast a stele commemorates the sad fate of two members of the rescue squad who tried to save a reckless photographer who had been swept into the sea. Michel Ponin and André Robet lost their lives, whilst the object of their sacrifice survived. This afternoon I see quite a few idiots posing for selfies on the very edge of the cliffs above turbulent waters. They probably go home exhilarated, whilst I stagger on down towards Quiberon through a succession of fine megaliths, weary and bleary eyed under the unhelpful slaps of that relentless wind... 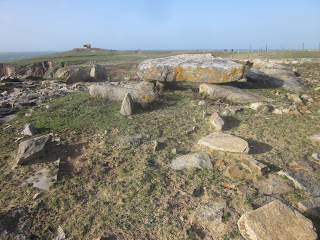 But I've done it. What I set out to achieve in 2019 is accomplished. I've completed a demanding schedule of research trips. Held tight to desk work when my health prevented travel. Finished the first draft of the manuscript before the end of December 31st. All is well. Happy New Year everyone. 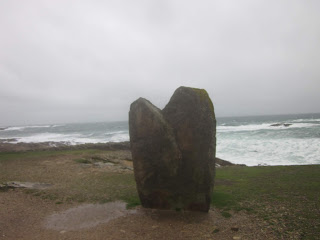