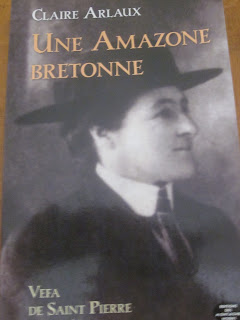 This extraordinary woman was born in 1872 in the Goëlo region of Brittany, although she is most closely associated with Spezet and the Montagnes Noires in Finistère for her later activities.
As a child she wanted to dress like a boy and harboured ambitions of running away to sea. Hunting was a real passion from an early age and throughout her life, guns were never far away.
At 18 she joined a nunnery, perhaps a surprising choice for one of such decidedly strong and individual character, but it did mean she got to go on her first significant journey, a mission to the Equator in 1899. This fuelled the thirst for long-distance travel which was to be another theme of her life, with a visit to America and Canada in 1906. By this time she had left the religious order definitively without taking orders or being thought suitable to take them by her superiors. She met President Roosevelt and spent a lot of time delightedly hunting caribou.
Back in Brittany in 1908 she bought the Manoir de Menez Kamm near Spézet which was to be her beloved home for many years. It was situated in prime hunting territory and she was soon well-known for fearless pursuit of the local wild boar. She learnt Breton and became an ardent (and militant) advocate of Breton history and culture, hoping for the kind of revolution in Brittany that Ireland had seen. She gave money and moral support to many Breton nationalist projects and local organisations, and was closely involved with Gorsedd bardic community. In 1930 she was given the bardic name Brug ar Menez Du (Heather of the Black Mountain).
She had a very lively intelligence, bent on constant learning throughout her life, whether languages, geography, natural sciences or theology, remaining a devout and committed Catholic. She also wrote poetry, although always very modest about her talents. A round-the-world trip in the 1920s gave her the chance to write about her travels and encounters for magazines and papers, as she visited Australia for an international Christian conference.
After the war, her beloved home was used as a centre of Breton culture, as she provided free bed and board for many writers and musicians. As old age loomed, she herself was increasingly based in Saint-Brieuc, until her death there in 1967. Claire Arlaux's engrossing biography tells the whole story of an exceptional and remarkable figure in 20th century Breton history, giving a new perspective on pre-war nationalism and subsequent cultural development.