The bridge that has lost its name.....

When I first came to the area of Huelgoat forest two decades ago, I discovered many small treasures in addition to the much vaunted sites like the so-called Grotte d'Artus and Camp d'Artus, and the Mare aux sangliers. One of these was the little footbridge over the upper reaches of the 'stream with no name' on the boundary of the commune of Berrien. The Pont Guern is a simple slab construction of unknown date, engraved with a cross. Some call it the Pont Guen or White Bridge, an echo of the well-known Pont Rouge in another part of the forest. It sits in an idyllic spot where dragonflies sport and a kingfisher flashes by from time to time. This was the only crossing north of the Mare aux sangliers when I arrived, so an important part of walking circuits around the forest. It was clearly signed from the rough forest parking above the valley off the main road between Huelgoat and Berrien. This unassuming bridge formed part of the childhood memories of old people who played here about a hundred years ago today, and it was certainly not new in those days, so at the very latest it is a 19th century creation, but quite possibly very much older.
Later, in my time here, a wooden passerelle was built between the Pont Guern and the Mare aux sangliers, offering more opportunities for criss-crossing the little river. To reach the Pont Guern from this new feature, an additional wooden walkway ran along the left bank, inches from the water, which runs fast and strong in any rainy season, and the path then leads through woods just above the flow to reach a little boggy meadow by the old slab bridge. 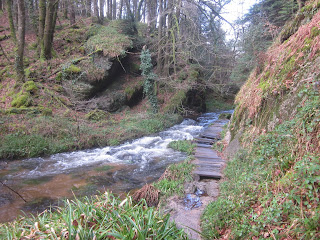 So far so good. An old crossing point and a modern construction, connected by a pretty path. Two places to move from one side of the stream to the other in possibly the most beautiful valley of the entire forest. Today, not so good, as the wooden passerelle has usurped the name and identity of the ancient slab bridge in an astonishing slap in the face to history and the importance of place-names.
The first sign of this historical corruption came quite a while ago with the appearance of a sign post on the main path above the passerelle, marking the Pont Guern at 150m down the linking path. This was obviously a mistake as the distance to the real bridge from that point is more like 400m. It would be by no means the first time that casual miscalculations of distance appeared in the name of tourism around here. But worse was to follow later. There has been a drive to put up information boards (mostly awful) and new signage in the forest, which is notoriously badly managed in that way. I spend a lot of time each year helping lost visitors. One of the characteristics of forest is that it is disorientating terrain - people unskilled in navigation and with no sense of direction need clear maps and clear signs, neither of which have been available (except in my own guidebook, mapped with GPS).
Metal plaques went up on the wooden passerelle naming it 'Pont Guern'. Almost immediately someone (not me) scribbled 'non' over these travesties of signs. I went to the mairie and was told to contact the Communauté de Comunes at Loqueffret. I wrote to them via their website and got no reply whatsoever. Twice. I later spoke briefly to the mayor of Huelgoat who expressed a passing interest but has had rather a lot on his mind lately, with coronavirus and elections. Perhaps this is not the moment to start a crusade on behalf of a tiny piece of heritage. But how is it possible for tourism to change history? For people who don't know the forest to make decisions about its documentation? I am amazed that there should be so little pride in local heritage that such an error can stand. I fear that increasingly such things don't matter. Who cares? I do and I hope I'm not the only one.

POSTSCRIPT to this in the light of responses on Twitter today. Maps of the area made for this year's tourist season mark the new crossing Pont Guern and leave the old bridge off altogether, now denying its very existence.
UPDATE 30/06/20  My meeting with mayor of Huelgoat to ask for some answers cancelled without explanation or apology.
Posted by WM at 12:18 pm

Something similar is happening in the UK with the removal of various statues and plaques. Sir Francis Baring made a lot of money, including from the slave trade. Removing a plaque on his former home in SE LOndon does not change that fact, but it may remove the memory of it. And once you have forgotten will anything have changed at all? Will modern slavery have been vanquished? What will have been gained?

Thanks, Candy. I have mixed feelings about the statue issue, but the poor little bridge has done nothing to deserve its suppression and it is a contemporary thing, still alive in the sense of carrying out its original function as well as ever.