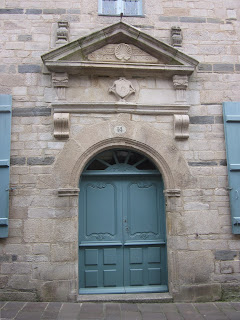 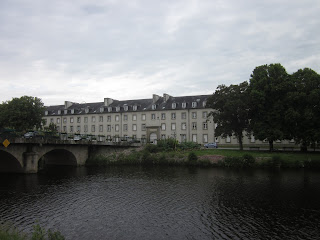 It's always amazing what strange stories appear during a forage among the archives of any place, anywhere. This week I've been in Pontivy (once Napoleonville and famous for its imperial town planning), before and after a welcome interlude with friends in Arradon on the Gulf of Morbihan. I'm looking at 19th century politics in this piece, and a very tedious subject this can be, but every so often something ridiculous or amusing turns up to brighten the long hours.
The allure of royal, or imperial, souvenirs is not a new thing. After the brief visit of Emperor Napoleon III and his wife Eugenie to Pontivy in 1858, the 'vase de nuit' (chamber-pot, rather than 'night-jar' which you sometimes see in translations!!) used by the Empress during her night's stay, became a much sought-after item, and not merely for its quality English porcelain. But the very nature of 19th century politics is seismic shifts. Fifty years later, the pot was on sale in a second-hand shop in Vannes.
The Empress was good enough to promise funds for a new church in the town, having been asked pretty bluntly by the priest during the celebratory banquet organised for the imperial couple. How pleased she was to be represented in gargoyle form on the facade, we'll never know. And sometimes it is better not to know things, especially endless detail about the lives of people in whom we have no interest at all. 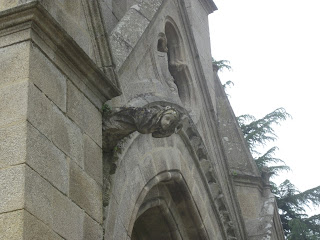 Email ThisBlogThis!Share to TwitterShare to FacebookShare to Pinterest
Labels: Pontivy