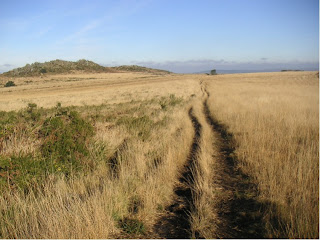 Today was the first outing for my superb new walking boots, which arrived yesterday after a nightmare of searching, ordering, being told that 'in stock' actually means arriving in February, or that my feet are unreasonably small and therefore not 'normally' catered for. England is clearly increasingly full of cart-horses. Thanks to the efficient and good-humoured staff at Cave and Crag (http://www.cave-crag.co.uk/ - thanks, Dave :-)) who rushed out a pair within hours of my plea, the great day is here and what a walk I had on the soupy, sloppy December moors, with dry and warm feet.
I have come back to my all-time favourite, the Hi Tec light-weight range - best on the market imo - by buying the new Altitude Ion Mask boots, excruciatingly called 'a breakthrough in surface enhancement'. Using a magnifying glass to check out details on the label of this 'quantum leap in footwear technology' I discover that the boots are not only waterproof but also hydro phobic - with the many problems water is already facing all over the world, I hope environmentalists will act quickly to nip this alarming new phenomenon in the bud.
Posted by WM at 5:54 pm 4 comments:

At the congress of French mayors in Nantes, Nicolas Sarkozy raises the reunification issue, apparently in a light-hearted aside, but he is too politically astute - notable lapse in marrying Carla Bruni notwithstanding - to draw attention where he does not relish the spotlight falling. His pre-election contemptuous dismissal of Bretons might yet have a worthwhile payoff.
Nantes was the ducal capital of Brittany from the 10th century, finally severed from its body by the Vichy government in 1941 and enshrined as head of the new region Loire Atlantique in 1957. Symbolic and historical significance aside, the economic repercussions of losing Brittany's main industrial concentration overnight were severe, despite later investment in the four remaining departments, Finistere, Cotes du Nord (now more seductively titled Cotes d'Armor, but not d'Armour as many British incomers call it), Morbihan and Ille-et-Vilaine.
B5 (the 'true' Brittany of 5 departments) is a rallying cry by the re-unifcationists. Good luck to them, even if it is necessary to get into bed with the likes of Sarkozy to achieve their end. It is after all an act of peculiar cultural barbarism to severe a capital city from its region. One of the many reasons for lauding the patrimoine of the Nantes-Brest canal is that this old waterway remains a physical link between the two parts of historic Brittany. You can read all about this in my latest book, Crossing Brittany.....................
Posted by WM at 1:53 pm 2 comments: 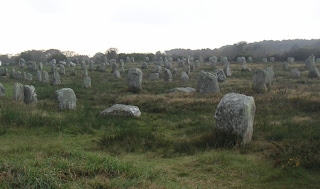 Back in Brittany, I spent a day at Carnac with my good friend Jane Brayne, artist and archaeological illustrator (from Meet the Ancestors fame, and also well-known for her work on Avebury and Stonehenge) who has dashed back with me from England to do some preparation for an exciting new project. As the weather was appalling, we were the only people on site: I had forgotten how moving the experience can be without the hordes.
Posted by WM at 6:24 pm 2 comments: