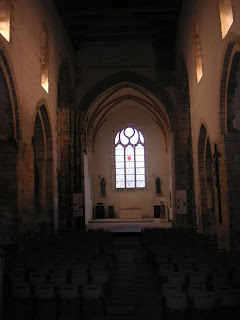 I went to a concert of chant at one of my favourite places in Brittany, the Abbaye du Relec, on Saturday evening. It's an approriate setting for the genre, being a Cistercian foundation dating back to 1132. The church is austere and authentic, from the extensive damp patches of green mould to uncomfortable seating and lack of heating.
As is common in Brittany, there is no programme. One of the performers gives a short introduction here and there, but unless you are sitting near the front it's impossible to hear, as there are no microphones, so there is no immediate trigger as to context or subject matter. I also can't see anything in the first half, because the man singing the Breton chants is short and his guitarist is seated.
These things enhance the experience. All I am aware of is the music, the lone male voice echoing round the high nave, mimicked by the flight of a trapped bird swooping and soaring in the chancel behind him. The purity and simplicity of the timbre match the architecture even if God is not the musical inspiration. For one song he is joined by another man and the combination is electrifying, a familiar patterning from the traditional kan ha diskan (call and counter-call) of fest-noz music for dancing. My heart beats fast with extraordinary pleasure.

The second half begins with a female group from the Balkans, three tall, one short, all clad in costume and projecting powerful voices as they process down the nave smiling at members of the audience. On the stage they move and make dramatic gestures and facial movements, touching each other affectionately as they weave physical shapes to the rhythm of the songs. They are good, but for me the spell is completely broken. This is performance, knowing and calculated, where the first half was nothing but music.
Posted by WM at 6:13 pm No comments:

Email ThisBlogThis!Share to TwitterShare to FacebookShare to Pinterest
Labels: nd 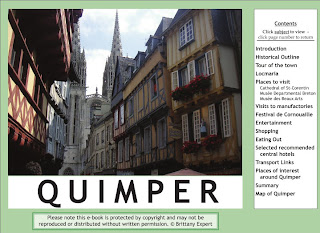 New town guides to Rennes and Quimper are now available from my Brittany Expert site (link opposite). Everything you need to prepare for a visit or just admire the wonders Brittany has to offer - lavishly illustrated and with a town centre map. 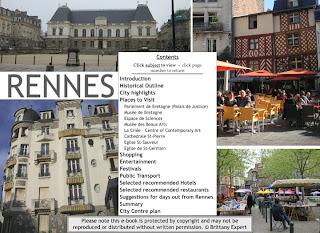