waiting for a reply from Brittany tourism

I'm waiting for a reply from Brittany tourism's new head honcho, who happens to be English. I wrote three weeks ago asking for a late October meeting about my Briton/Breton historical trail project. No reply. Yesterday morning I sent another polite message and reprinted the first in case it was never forwarded to him. Now I wait and hope and wait and .........
My reply rate from Breton tourist boards/organisations/officials over the years has been less than 25%, but I remain absurdly optimistic and put all my faith in Mr Michael Dodds. After all, why wouldn't he be interested in such a project?
Posted by WM at 7:44 pm 2 comments: 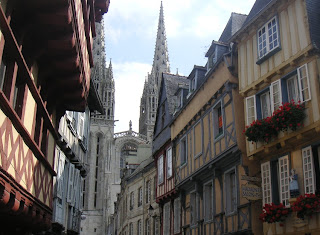 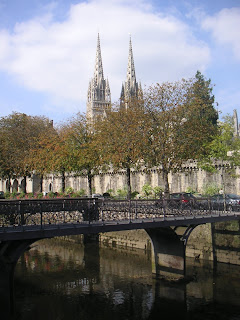 This small city, capital of Finistere and the Cornouaille region, has gradually gnawed its way into my heart after our lukewarm first meeting six years ago. It has its quirks in addition to the much-pictured cobbled medieval streets and maisons à pan de bois. The walled medieval ville close was in fact unusually the preserve of the bishop, whilst the duke of Brittany had to content himself with the Terre au Duc, west of the Steir. Each had their own essentials: mills, fishponds, markets and seats of justice. But Quimper has always been a place of clerics, once awash with Franciscans, Jesuits and convents of every persuasion. Standing on the old rempart above the paradisical Jardin de Retraite, the huge Jesuit chapel dwarfs the fortifications that failed to protect this little settlement in the Wars of Succession and Religion. The luminous cathedral is renowned for its crooked axis of choir (13th century) and nave (15th century). Does this symbolically reflect the droop of Jesus' head on the cross? No: some idiot built the bishop's palace alongside inbetween times and there was nowhere else to go. The gleaming spires with their lofty statue of legendary founder King Gradlon are 19th century add-ons.
But if it's symbolism you want: the Max Jacob passerelle, augurated in 1994 for the 150th anniversary of his death in the camp at Drancy, stands almost between the two buildings designed by loathsome Breton nationalist and one time architect Olier Mordrel (born Olivier in Paris, Corsican mother, a late learner of Breton), who was condemned to death as a traitor after the war, and hid out in Argentina before returning to Paris and the same repulsive rhetoric in the 1970s.
The name Quimper means 'confluence' and the fluvial trio of Odet, Steir and Frout has led to some merry flooding, as recently as 2000 when plaques marking the water's highest point suggest that I would have been swimming along the rue René Madec (named for one of lowly Quimperois origins, whose private army in 18th century India won him the title of nabob).
Posted by WM at 4:10 pm 1 comment:

Sad news. The Long Thought is no more. The title, that is. Whilst I understand the marketing and promotional reasons for this change, for me it means giving up the true name of my new book. It is now to be Crossing Brittany - well, yipppeeeedoo :-(
Posted by WM at 10:52 pm 1 comment: 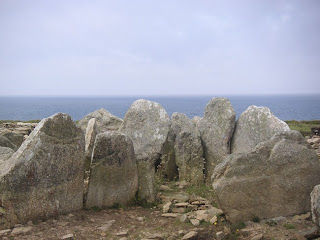 Part of the Neocropolis at Menez Dregan. There is also a paleolithic site on the cliffside just below.
Posted by WM at 4:47 pm No comments:

And I've also got plenty of ideas for an American tourist trail in Brittany. Apart from the obvious WWI & WWII sites, there's Benjamin Franklin's visit in 1776 (before he was president), when he landed at Auray's exceptionally picturesque port of St-Goustan; Fulton's testing of the first submarine at Camaret in 1801; Jack Kerouac's family origins at Huelgoat - all fortunately highly attractive places to visit. And there are many more I'll keep to myself for now.
Posted by WM at 11:43 am 1 comment: 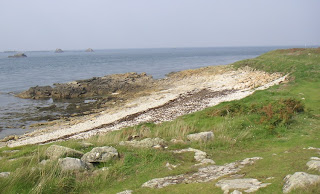 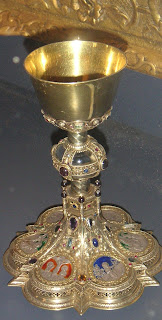 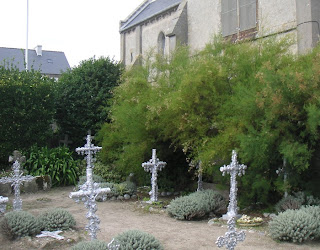 The trail is developing well. I've just spent a day on the island of Molène, in the Atlantic between the continent and Ouessant (Ushant). It's a small place of 100 hectares and only 250 regular year-round inhabitants. It makes a pleasant change from the Celtic saints and Hundred Years War incidents to be researching an event, albeit a tragic one, from the Victorian era for my Briton/Breton historical trail. On June 16, 1896 the steamship Drummond Castle hit the rocks (Pierres Vertes) west of Molène on the last night of its voyage from South Africa to England, and sank within minutes. Fishermen saved two sailors and one passenger early the next morning, but the other 244 people on board perished. 29 of the bodies recovered were buried in a special corner of the churchyard on Molène. The islanders received thanks both practical and spiritual, with Queen Victoria putting up the cost of a cistern, which still stands near the church, to relieve the perennial freshwater problem, and the Guild of All Souls sending a jewelled chalice and plate to the priest in acknowledgement of the Christian burials accorded to the victims.
Posted by WM at 11:20 am No comments:

Email ThisBlogThis!Share to TwitterShare to FacebookShare to Pinterest
Labels: Molène

in praise of the pringle

I am going through an obsessive phase of Pringles. I bought my first tube on impulse a year ago in a little shop in the Monts d'Arrée as I drove back from Quimper. I have a strange history with the crisp: as a child I used to save up and buy small cardboard boxes of Chipples salted potato sticks from an old-fashioned grocer's shop in the Gloucestershire village where I grew up. I always ate these secretly in my room: comfort food and an a early type of protection ritual. When they stopped making them, I never made the step to that poor substitute for the potato stick, the common and ubiquitous crisp. As an adult in London I discovered that M&S had the goods, but in large packets so that the salt intake meant borderline hospitalisation if eaten all in one go (and how else could they be eaten?). In Somerset I had a similar relationship with tesco potato sticks, but all this was in my pre-thyroid days and once that hereditary menace emerged I gave up such indulgence.
So here in France where crisps are foolishly called chips and so loaded with salt that wrinkles appear as you eat, there has been nothing comparable to tempt me until now. What is it about Pringles? Partly the perfect light texture and seasoning, partly the challenge of the shape: it tantalises the mouth and requires, for the greatest oral satisfaction, two bites, the first of which must be clean enough to avoid shattering the second half into fragments. Then there is the effort required to plunge one's hand further and further into the tube, and the test of how many days you can make one lot last. I can't do better than four. But the whole process has all the fulfilment of a ritual beyond physical gratification.
Posted by WM at 10:41 am 4 comments:

How I hate Sunday afternoons and their inherent purposelessness. How do normal people manage to pass those world-without-end hours? I spend all week walking and reading and writing - what else is there to do? Today I can't seem to find any task to lift the dreary energy so I try to match it by using time to delete hundreds of photos from the laptop as the new XP update tells me I am running out of space. Several thousand pictures of the Nantes-Brest canal have just flashed past my eyes, reviving old passions, but it seems a fitting moment to get rid of many now that my active love-affair with the canal is very nearly over - although I hope we will remain good friends.
The puppy, from his bed on the windowsill next to my desk, has just been sick in spectacular fashion all over the final maunscript changes to The Long Thought and over my diary. Whatever I was going to do in October has lost its appeal, and I will need another updated manuscript, but hey, I have something purposeful to do at last - pass the mop and bucket, Alice.
Posted by WM at 4:27 pm 1 comment: 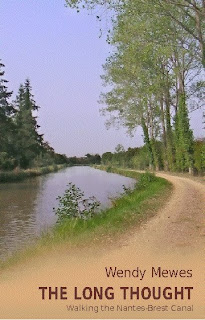 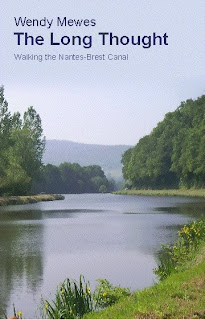 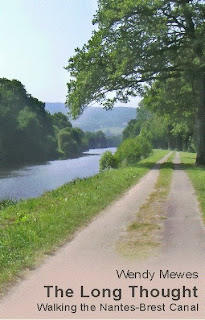 The cover of The Long Thought is evolving slowly. These are the front-runners.
Posted by WM at 12:15 pm 6 comments: 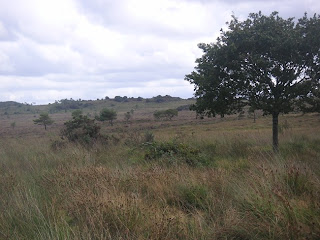 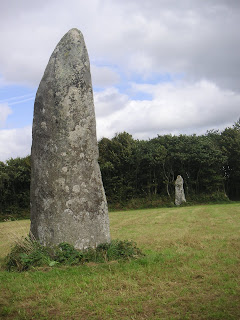 Preparing for an association event next week, and had a good walk on the Landes de Cragou, where Dartmoor ponies graze and buzzards wheel. The theme is both landscape and the earliest traces of man.
Posted by WM at 10:59 pm 3 comments: