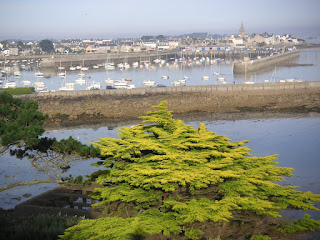 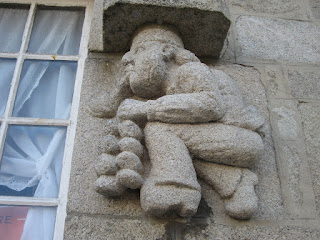 Took two friends to the spa at Roscoff today to enjoy the two sea-water pools with full-length windows giving views over the sea that laps at the foot of the building. The swimming pool is very warm and the smaller one with jets and jacuzzi corners (with underwater seats) a bit cooler. There is also a Turkish bath (too hot for me) and a sun terrace, all included in a price of €13. Seemed a bargain, as there were few people so a real chance to swim lengths or just float about undisturbed. I sat for half an hour in the whirling water section watching the tide come in and the Ile de Batz just a few hundred metres away. It was incredibly relaxing, but also with the uniquely tonic effect of sea-water. Pity I had to drive all the way back after - a sleep would have been the perfect ending.
Such a pity that Roscoff doesn't get all the tourist trade it deserves. The ferry port is on the eastern side of the town, so there's no need to make a detour before heading south. But the town is architecturally exceptional, as well as having many historical links with Britain, from corsaires and smugglers to Mary Queen of Scots and Dorothy Silburne (d.1820), an English society lady and tireless worker for the poor who lived in Roscoff for the last few years of her life.
Posted by WM at 5:48 pm No comments:

Email ThisBlogThis!Share to TwitterShare to FacebookShare to Pinterest
Labels: Roscoff 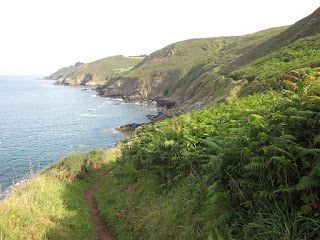 I've been working this week on the Saints Shore Way, a project in conjunction with the Pays de Morlaix. This picks up the idea of the Saints Way walking trail in Cornwall and follows a coastal route from Roscoff to Lannion, part of the shore where the Celtic monks and their followers landed. The themes of the guidebook will relate to the age of saints - particularly the early origins of Brittany and the Breton language, as well as economic connections with Great Britain and historical conflicts.
The GR34 coastal path in Brittany is based on what was originally a route for military defence and smuggler-watching, with many guard-houses and lookout towers remaining along the way. The cliffs of Trédrez where I walked yesterday offer a wilder stretch of heather-clad slopes above the sea in the bay of St-Michel-en-Grève, with views across to Grand Rocher and Locquirec. The path snakes along midway between the summits and the water before arrival in Locquemeau.
This area of the Trégor is one of the earliest districts of Brittany, based on the bishopric of Tréguier. Unfortunately carved up by the French at the Revolution, it now straddles the departments of Finistère and Cotes d'Armor. Both the coast and the interior are exceptionally worthy of exploration.
Posted by WM at 2:36 pm No comments: 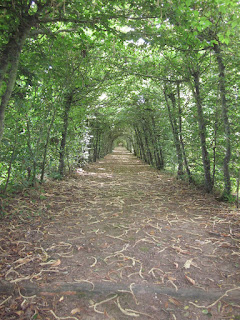 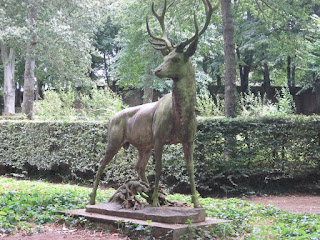 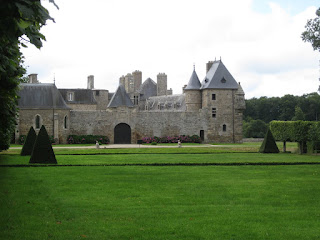 Took a friend here yesterday for a look at the gardens, with a superb charmile (hornbeam arcade) running around the margin and various 'rooms' of greenery and sculpture. Not a flower in sight for a pleasant change. With all my work about trees and forests lately, I was completely entranced by this deceptively simple concept of greenery (best seen against the grey sky), where shape and tone are everything. Some parts are geometrically designed, others natural with apparently random patterns of huge trees. I lay on a stone bench and just looked for a long time.
Posted by WM at 9:38 am No comments: 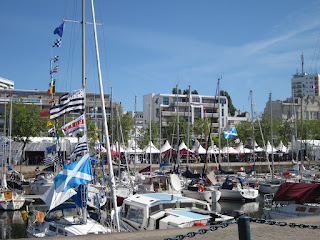 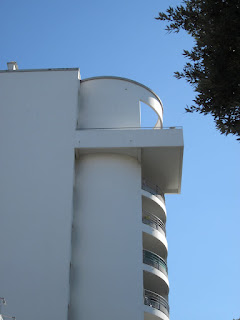 Lorient is not in any sense an old place. It began in 1666 as a new port on the confluence of the Scorff and Blavet, and a base for the Compagnie des Indes (French India Trading Company), the town taking its name from one of the first ships built there, the Soleil Orient, more commonly called L'Orient. This maritime history is graphically portrayed in a 17th scene now adorning one vast wall of the Chamber of Commerce's entrance hall. It shows Madame de Sevigny, society lady and prolific letter-writer, arriving at the port amidst ships, merchants and goods from all over the world. The facades of a few houses on the same quay today indicate the prosperous life-style of the ship-owners, but there is little else of Lorient's former glory since WWII bombardments aimed at destroying the German submarine base pretty much levelled the town. An unobtrusive stele marks the spot where the last surrender took place - not until May 1945.
Under the blistering August sun, the stylish modern white apartment blocks and pleasure harbours give an impression of renewed wealth and self-confidence. The stunning post-war church of St-Louis is a glowing advert for the versatility and downright beauty of 1950s concrete. I am here for the iconic Interceltique festival, mingling with my Welsh confreres, Cornish language promoters, Breton unificationists (who assure me Rennes will remain the capital under their plan, so as not to upset anyone - nice news for Nantes) and any number of bands and bagpipes. A terrific set from an Acadian trio is the highlight, Acadie in New Brunswick being this year's special invitees, as the Celtic world seems to be undergoing a remarkable period of globalisation. There is a strange history behind this connection, a tale of early 17th century French colonists, many from Brittany, many later repatriated, often unhappily, to Belle-Ile amongst other places. Today they are seeking to attract holiday-makers and entice higher-education students across the Atlantic. I doubt either group could do better than just staying here.
Posted by WM at 9:37 pm No comments: 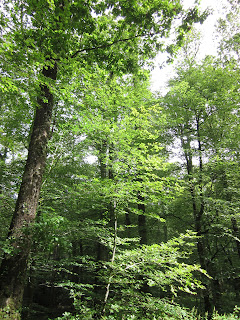 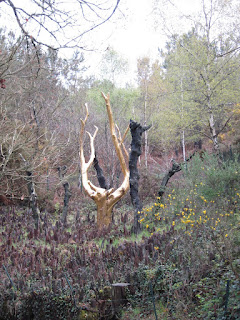 I'm working on the forest chapter of my new book, which looks at the symbolism and emotional experience of landscape as well as the history of Brittany through its terrain. The forest theme ties up with work I have in hand for other audiences later in the year so it seemed a good place to start. The beginning of a book is always tough for me, but the great chronological and geographical range here offers plenty of ways in. I often walk in the forest at Cranou or Huelgoat, lately with ideas positively dripping off the trees everywhere I look. This helps to convince me I'm doing the right thing.
The text will look at forest clearance, particularly during the Age of Saints and the later Cistercian initiative in the unusual quevaise system in western Brittany, as well as forest exploitation and production from sabots to timber for the navy at Brest. The forest as a place of concealment will include detail of salt smuggling on the eastern border of Brittany and resistance activity in WWII.
The Foret de Paimpont, more commonly known these days as the Brocéliande of Arthurian legend, takes us into the imaginative world of the forest and its association with enchantment and transformation. The striking symbol of the Golden Tree there is a recent memorial to the forest's power of regeneration after a series of terrible fires in modern times. The shape of the tree echoes the stag's horns in the Arthurian-themed church at Tréhorenteuc.
Posted by WM at 2:27 pm No comments: