Today is the last post on this blog. I have enjoyed sharing the history of Brittany and details from my writer's life with many readers over the last fifteen years and thank everyone for their support. Promoting the beauties and complexities of my adopted land remains a high priority, but in the interests of focus and simplification, I shall concentrate now on expanding my website www.wendymewes.com  New writing and updates on what I'm doing will appear there regularly. I have various projects for 2021 which will both lead in uncharted directions and re-ignite my Breton explorations. Hope to see you all in new places.
Posted by WM at 12:15 pm No comments:

Neither Nominoë’s military prowess nor his money put an end to Viking aggression in the mid 9th century, but the results of this were not entirely negative. One of the reasons for the success of the next rulers, Erispoë and then Salomon, in consolidating Breton territorial expansion was certainly the distraction caused to the Franks by the Norsemens’ raids all over their lands. This onslaught was particularly intense on the northern coast of France, and Brittany did not escape unscathed. The monastery on the Ile de Batz was destroyed in 884. Anywhere accessible by water was vulnerable, and even inland river towns like Rennes and Redon were not spared. The river Gouédic opened St-Brieuc to pillage in 855.

The assassination of king Salomon left something of a power vacuum in Brittany and no strong single leader emerged to tackle the Viking menace until Alain, count of Vannes, defeated them at Questembert in 888. He was given the epithet the Great for his achievement, and things improved for the remaining twenty years of his rule. But this was only a temporary hiatus and the 10th century saw increased terror on Breton soil.

Some of the Vikings were now seeking land to settle on, as they did in what is now called Normandy. Fixed camps were established near St-Brieuc, Dol-de-Bretagne and Nantes, where they even got official permission to set up a trading station on an island they had colonised in the Loire. In response many Breton nobles chose or were forced to flee, taking refuge in France or across the channel in England. The famous river camp of the Vikings at Saint-Suliac is of disputed origin and many claim it is in fact an old oyster-farm.

The abbey of Landévennec on the waterside at the mouth of the Aulne was burnt and plundered in 913, although the monks probably had advance warning of the Viking approach across the Rade de Brest and were able to evacuate themselves and their most precious treasures. The abbot Jean saw the potential saviour of Brittany in the person of another Alain, grandson of Alain the Great.

This young man was in fact in England, having been brought up at the court of the Anglo-Saxon King Athelstan, who was only too happy to supply support for a mission against the Vikings. Many rallied to Alain’s banner when he landed in Brittany: violent destruction was increasing and the Vikings were well set up in their fortified camps like the one at Péran, near St-Brieuc. Over the next few years a whole series of battles was fought, with finally a major victory for Alain near Dol-de-Bretagne in 939.

The nobles began to return, but Alain Barbetorte was able to consolidate his power and ruled – independently of France - as Duke of Brittany rather than claiming the title king, although the epithet Ribret or Robre meaning king of the Bretons is sometimes used of him. Nantes, which had been left in ruins after being sacked a second time by the Vikings, became Alain’s capital. He found the city almost deserted, hacking a path through the brambles with his sword to reach the once great church, now a roofless skeleton. Here he began the rebuilding of the cathedral and the construction of a new chateau near the Loire, calling on Bretons to come and re-populate the area.

After his victories, the wave of Viking terror was largely over in Brittany, but it left a legacy of destruction and dispersion that was to have serious consequences. The strong influence of French poured into Brittany with the return of nobles who had fled the Vikings. Their long stays in France meant that they brought back both the French language and French customs on their return, to the detriment of Breton. Already the eastern part of Brittany was increasingly Frenchified. After this time, the Breton court spoke French or Latin and not Breton, which began its retreat to the west of the region as early as this. Alain Fergent, the last Breton-speaking ruler came to power in 1084. Breton in future centuries was to be the language of the people. 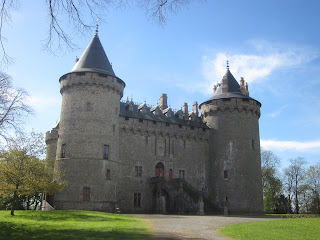 I am just coming to the end of work on my Combourg guide, tracing the history of this arresting chateau, which has come to be more of a personage than an edifice to me. The intricate association with Chateaubriand, the Father of Romanticism, who forged his writer's personality here as an adolescent, has ensured the lasting reputation of the castle, but in a way this distracts from its long evolution. From many indulgent accounts, one would almost think that he had created the character and atmosphere of the site rather than the other way round. I had only a brief acquaintance with the great author before getting to know Combourg, and despite a lot of intensive study subsequently, he has made a decidedly lesser impression on me than the austere chateau and its verdant setting. This is yet another example of the spirit of place trumping the spasmodic splash of history.
Posted by WM at 4:14 pm No comments:

Email ThisBlogThis!Share to TwitterShare to FacebookShare to Pinterest
Labels: Combourg 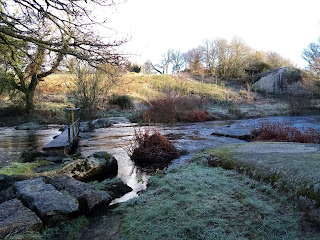 Most beautiful start to the year as I crossed this exuberant river over slippery stones in early sunshine. So 2021 begins in a happy place...
Posted by WM at 12:55 pm No comments: 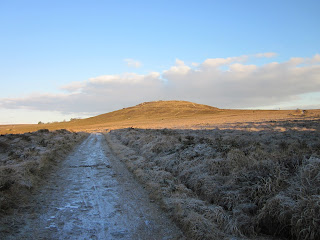 Yule is here again. The wheel turns still. Despite the fears, limitations and frustrations of 2020, it has been a productive one for me. Not only at last a French edition of the Nantes-Brest Canal guide, but Wayfaring in Brittany finally published after three years in the making and, most recently, The Stolen Saint, my first novel in many years, coming out in paperback and in a digital version. This was started in March during confinement and finished at the end of September. I say all this to remind myself of achievement and to show that even against monetary hardship, depression and surrounded by a pandemic, we can reach deep into our creativity as a resource to fight back against the darkness. Those who know me know how I love winter, but it has been tough to tap into even that source energy this year and the struggle is not yet won. But Yule brings change inevitably and it is up to us to respond as best we can. The solstice marking light's slow return journey is both a trigger and a challenge. We can count on that, if nothing else.

I wish all my lovely readers the brightest of times in the most demanding of circumstances. I am very thankful for your support and encouragement to continue into a surprisingly uncertain future. Bon courage to you all.


Here in Brittany the image of the Vikings has undergone what has become a familiar sea-change, from bloodthirsty sadists to high-spirited entrepreneurs. What is certain, however, is that they insinuated themselves into the Breton/Frankish power struggles like a ragged cross stitch for a hundred years, often acting in temporary alliance with one side or the other. The initial hit-and-run marauding in search of booty and adventure became over time a more complex mixture of power and land seeking. Most important of all for the development of Brittany, there is no doubt that their activities between 840 and 940 had highly significant consequences for Breton identity, language and culture, striking at the very time that Brittany the political entity was in formation.

In the 830s, Nominoë, a Breton count initially acting as representative of the emperor of the Franks to keep the peace, had begun what seem to be deliberate attempts to unify Bretons against the Franks and establish distinct spheres of political and religious control. After Charles the Bald inherited the western part of the Frankish empire from Louis Le Pieux, he was soon on a collision course with Nominoë and fighting in the disputed lands of the Marches of Brittany was fairly constant, with the Bretons pressing as far east as Le Mans.

In June 843, the Viking attack on Nantes was an explosive shock, coming nearly fifty years after the first raids further south on Noirmoutier. The fleet of 67 ships were from Norway, possibly having followed the northern route around Britain via the Shetlands and Irish sea to access the Loire estuary. Whether by luck or insider information, it took place on the feast of St Jean, as the bishop Gunhardt was celebrating mass in the cathedral. According to a later (religious) source, he was pronouncing the eucharistic prayer ‘sursum corda’ (lift up your hearts), giving a ritualistic tinge in Catholic tradition to his brutal murder at the altar. The 11th century Chronicle of Nantes gorily describes the slaughter of the congregation that ensued.


After this crippling assault, the Vikings departed with their booty. It was to be ten years before Nantes suffered a repetition, but the struggle with these ruthlessly mobile new intruders, consisting of different groups acting both jointly and independently, was only just beginning in Brittany. The Annales de Saint-Bertin record three battles fought by Nominoë against the Vikings in the year 847. The upshot was not the clear-cut victory he had hoped for and the negotiations that followed ended in the first Breton payment of danegeld to speed the Vikings’ departure. But this secured only the briefest lull in hostilities and the true scale of the threat could not yet be measured. TO BE CONTINUED....
Posted by WM at 11:40 am No comments: 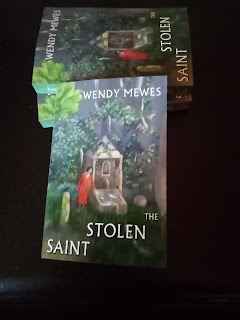 It's here at last! THE STOLEN SAINT comes out today with a low-key launch on December 5&6 at The Bookshop in Huelgoat, 2.30-4.30pm both days. Covid precautions and masks essential. Thanks to all those lovely readers who have already ordered the book online (reddogbooks.com/stst.htm) - hope it will be an enjoyable experience for everyone. I might even start the second in the series now...
Posted by WM at 2:41 am No comments: