On the other side of silence 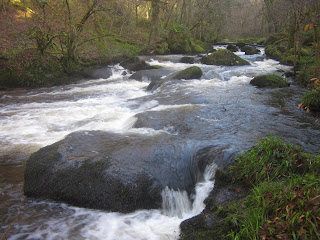 I have just finished a five-day silent 'retreat', staying at home and only walking where I knew I'd see no-one. Neighbours were primed to ignore me if necessary, but in fact I saw no-one for the duration. My purpose was to explore the thing itself, to think through a few issues, to renew my spiritual practice with meditation and study, and to relax deeply. The only concern was my very loving dog who is used to constant verbal communication with me and who is highly vocal himself. On a few occasions when he seemed really perturbed or frustrated by the silence, I whispered in his ear. Otherwise he soon responded swiftly to a single hand-clap or whistle. In the house I maintained silence - no radio, TV, internet or music. There was plenty of weather to listen to as it turned out, and I walked through storms on the moors and in the forests, finishing yesterday with a meditation in the pouring rain at my favourite personal outdoor space, on the rocks beside a turbulent river.
On the first day, my energies and thoughts were a bit scattered as I broke customary patterns of computer use, using the time to make notes on the first question on my list for consideration, about one aspect of my life that needs decisions. I also revisited my personal values list and thought carefully about their relevance to the choices I must make. On my two walks I kept very much in the moment - no emails to think about or anticipate - and struck up acquaintance with two trees of powerful character that I have passed a hundred times before without looking or listening attentively. This was something precious in the way of connection that repeated as the week went on.
I also read a lot - Greek myths, a book on extending paganism beyond the superficial - meditated and used various methods of divination on the question of the day. I was very tired at the end of this first day, but had concentrated throughout almost effortlessly, as all distraction was off the table.
Too much happened to detail each day of the 'retreat' and some of it was far too intimate and extraordinary to write on a public blog, but moments of spiritual intensity and meaningful communication were not lacking. I read a powerful book about ritual and an academic history of paganism. I wrote the preface of my new novel and conceived an ambitious new writing project that would change the whole focus of my work if it turns out well. I made a couple of decisions that have been difficult to resolve in recent months and felt all my thinking clear and sharp from the second day. Some personal issues simply resolved themselves in the course of the week without special attention.
There was no problem whatsoever with the silence, no desire to break it or to communicate with any of my human connections. I slept long hours and by the last day my body was just about catching up with everything and relaxing in the space and silence that filled the house in a resounding way. I recommend the practice to anyone seeking clarity or peaceful development and would love to hear the experiences of others.
Posted by WM at 4:04 pm No comments: 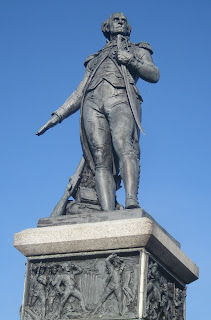 Starting this series of articles on interesting and not so well-known figures in Breton history with a soldier and scholar, who has left at least one important legacy in assigning the names dolmen and menhir to megalithic structures. Along with his friend Jacques Le Brigant, he was one of the first to be called a  'celtomane', reflecting passionate zeal for all things Celtic, a phenomenon which grew from the late 18th century until a peak a hundred years later. Amateur archaeologists and researchers of this persuasion were especially concerned with the excavation of neolithic monuments, which were thought - by almost all - to be the products of the Celts and Druidic religion.
His life (1743-1800) is celebrated in Carhaix, his birth-place (unless it was nearby St Hernin), with a statue in his eponymous square. The tribute portrays scenes from his astonishing military career, where he was highly respected by his men and regarded as having a charmed life. But he was also an accomplished scholar, and rarely seen even on campaign without a book.
Théophile-Malo Corret grew up in the Chateau de Kergoat and was educated at the college of Quimper before joining the Mousquetaires du Roi. Later serving the Régiment d'Angoumois, he went on to fight in Spain against the English. In 1777 he added De la Tour d'Auvergne to his name after discovering a link with this famous noble family. He was unusual in refusing promotions and honours, such as the rank of colonel, and only accepting to be a captain in the grenadiers in 1792, when he fought in the Republican army after the French revolution. 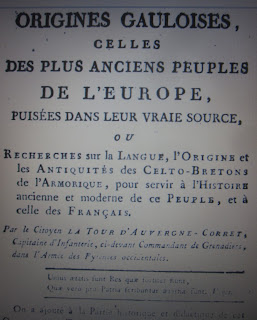 His only surviving major work is the Origines Gauloises, published in 1792, which sets the Celts and the Breton language at the beginning of European civilisation. He formalised the use of menhir (or long stone in Breton) for a standing-stone (although peulven or upright stone is equally known in Brittany) and dolmen or stone table for a tomb. This refers to the basic structure of two uprights and a capstone of the simplest form, resembling a table in outline.
In 1797, after failing to use his influence to save Le Brigant's only son from military call-up, La Tour d'Auvergne  decided to volunteer in his place, and at the age of 54 was back in arms. In April 1800 Napoleon gave him the title Premier Grenadier de la République for acts of great bravery, but he was to die only two months later on the battlefield at Oberhausen in Bavaria. He is buried in the Pantheon. 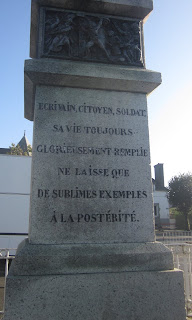