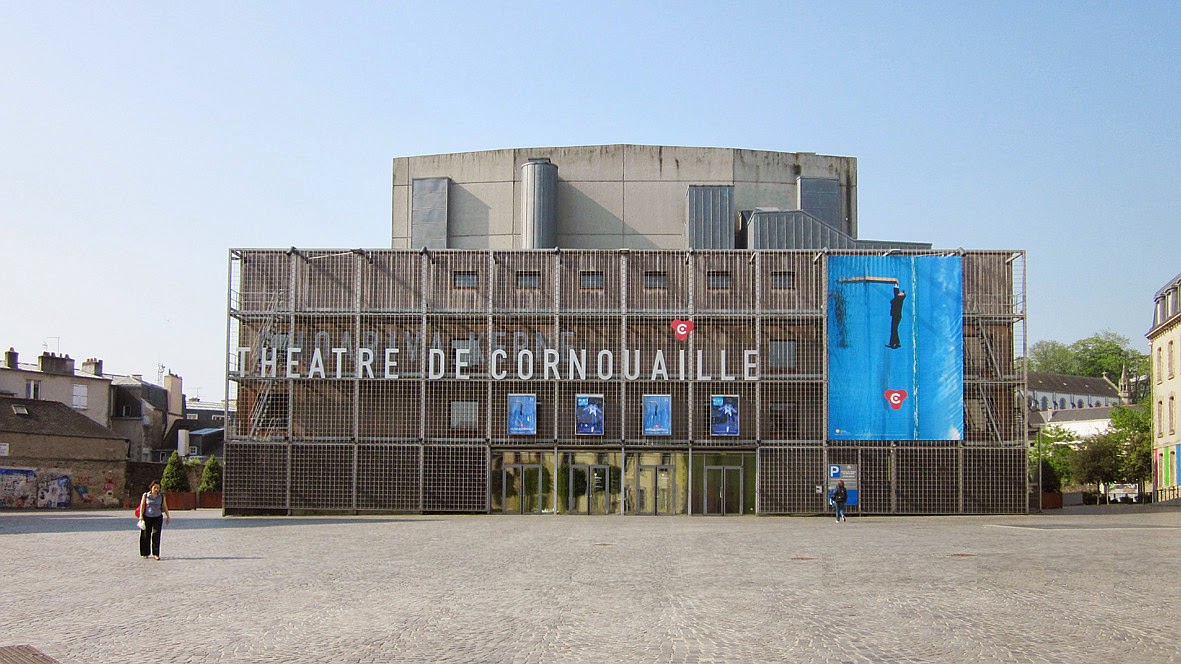 I first went to hear the original Talich quartet in London at the Wigmore Hall about 30 years ago. The dense power, lightness of touch and liquidity that were so impressive then were equally evident yesterday afternoon in Quimper, when the current line-up, including a member of the original family,  performed Schubert's Death and the Maiden and their speciality, Dvorak, (Quartet No.10) at the Theatre de Cornouaille. This was a Sunday 'chocolate concert' with hot chocolate to drink and handmade chocolates to sample before the show. And what a show it was. We were sitting in the balcony, a perfect vantage point for every bowing, facial expression and bald spot. It was magnificent, and a packed theatre would have sat for many more than the three encores we got. This morning I unearthed my recording of the Talich playing Dvorak quartets and quintettes and it is playing as I write. Moving, exciting and so evocative of my long love-affair with eastern Europe and time spent there.
Posted by WM at 10:46 am No comments:

Thanks to all who have enquired about a follow-up to the much appreciated little tourist book I did on Huelgoat last year. In exactly the same format and to be published in separate English and French editions is 'The Monts d'Arrée.' Same kind of thing - sights including villages, nature trails and local museums, history, legends and walking maps, plus a glossary of Breton place-names. I am told it will be out in May.
On the other hand I don't have a firm publication date from Signal Books for 'Brittany: a cultural history,' but it is being edited at the moment and I've just seen the cover for the first time, so things are happening over there in Oxford. 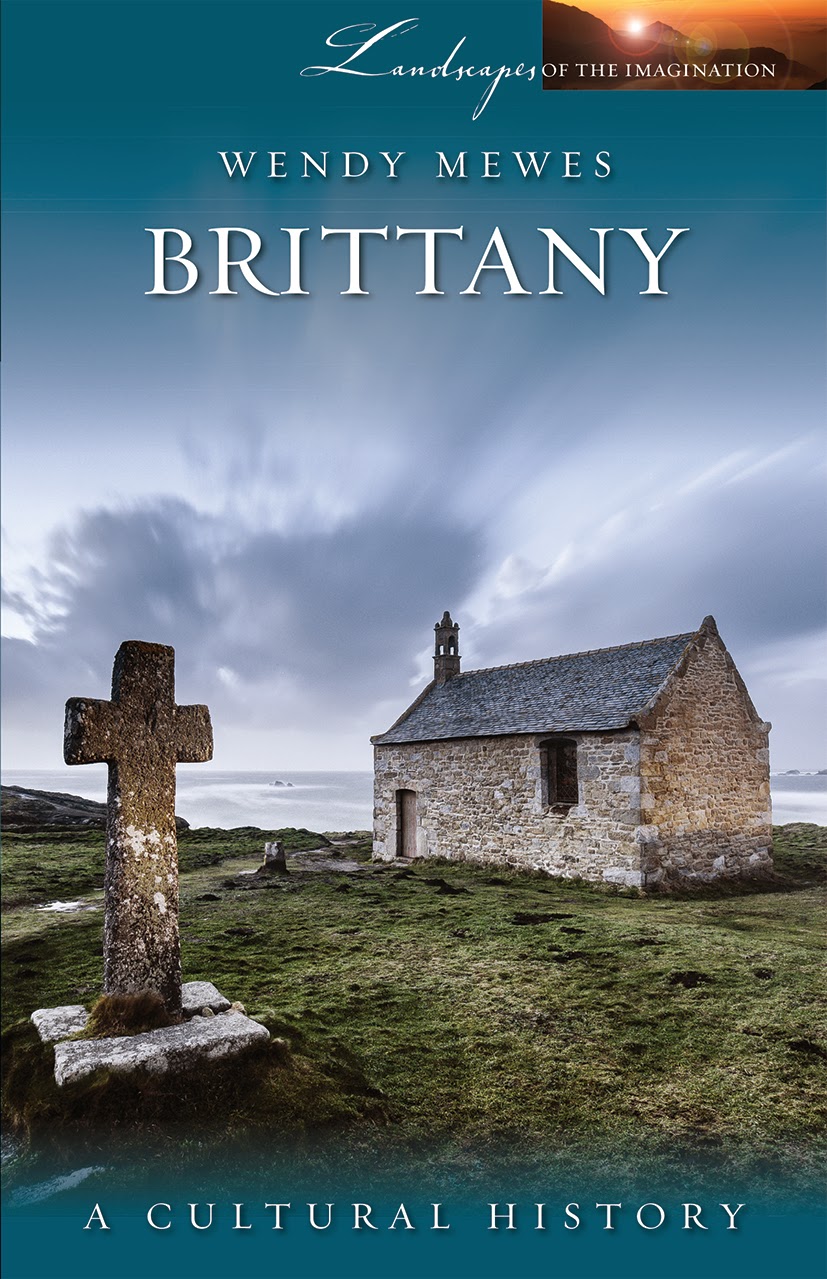 A change of scene

Just spent a few days in eastern Brittany, part research, part pleasure of revisting some old much-loved haunts. On the way out stopped at Bécherel, the little town of books à la Hay-on-Wye, then continued into Ille-et-Vilaine to stay in the same fantastic accommodation as last September (thank you, Lionel and Maryne - www.gites-combourg.com), which is certainly the best such place I know of in Brittany. Five minutes away is the beautiful small town of Combourg with its chateau immortalised in the works of French writer Chateaubriand, who spent part of his childhood there. I am currently writing a text about both man and place, so it was great to be back walking the grounds where he famously 'created' the state of ennui in his teenage angst years.
The French friend I was with had not visited this area before so we did some sights, including the Menhir de Champ Dolent. I have been pretty underwhelmed by Dol-de-Bretagne's treatment of tourists and distortion of history on many previous visits, but yet another example can be seen at this famous menhir, one of the best known in Brittany and a feature of various TV films needing a bit of mysterious atmosphere. The new noticeboard is a jokey cartoon of the legendary origin of the menhir - no information whatsoever about the actual historical date and context of the stone, but only a silly story drawn in (dated) comic book style. What a pathetic service to offer visitors! Apparently no-one is capable of understanding or appreciating anything unless it is whimsical and trivial. Dol must be the dumbed-down capital of Brittany. 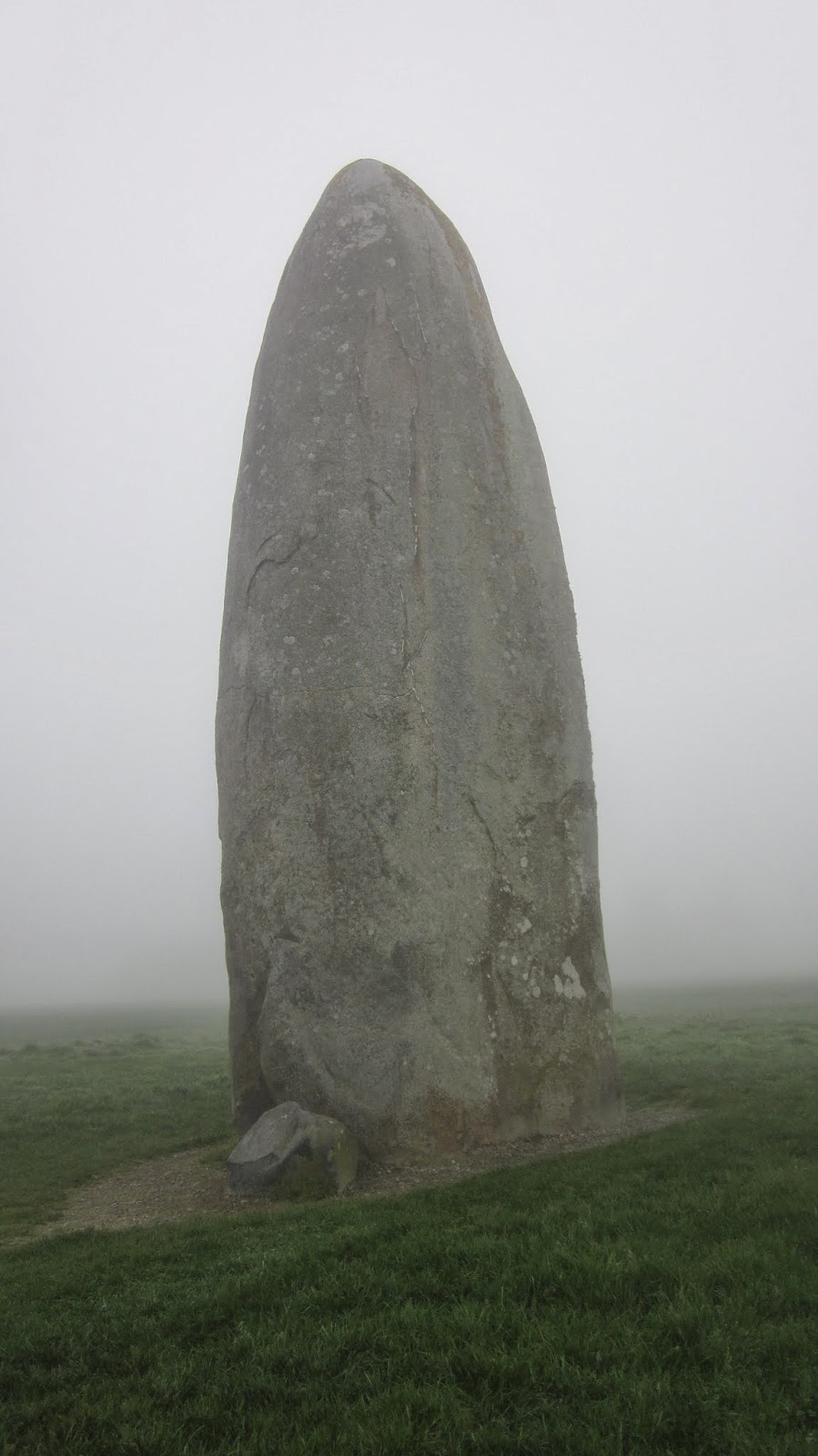 Otherwise we went to Cancale for my friend to eat those renowned local oysters but failed to see the sea despite lunching in a cliff-top restaurant at the Pointe du Grouin - a heavy mist lay over the NE corner of Brittany throughout the day and very little was visible. Went up Mont Dol to see the Devil's footprints anyway. 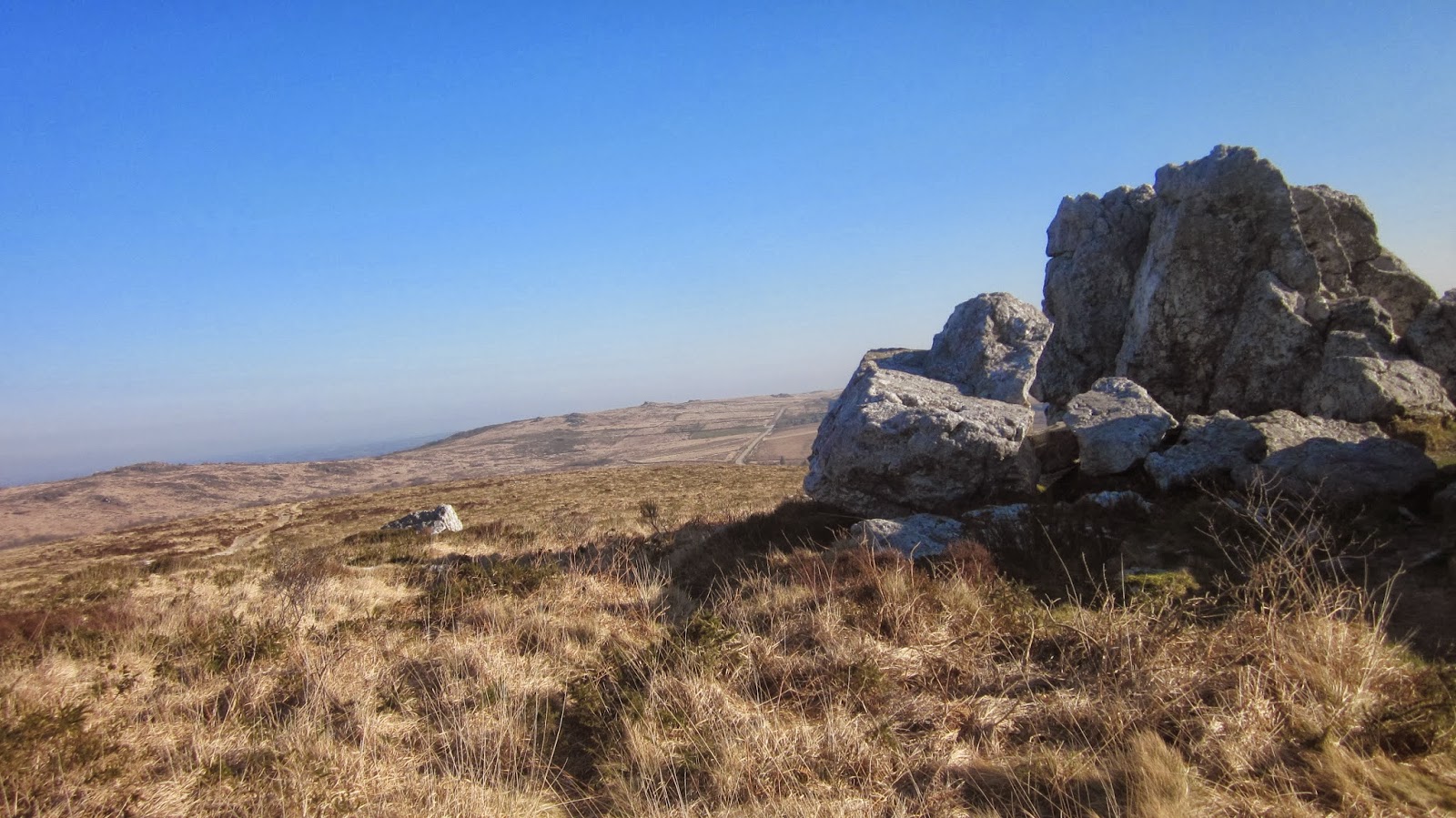 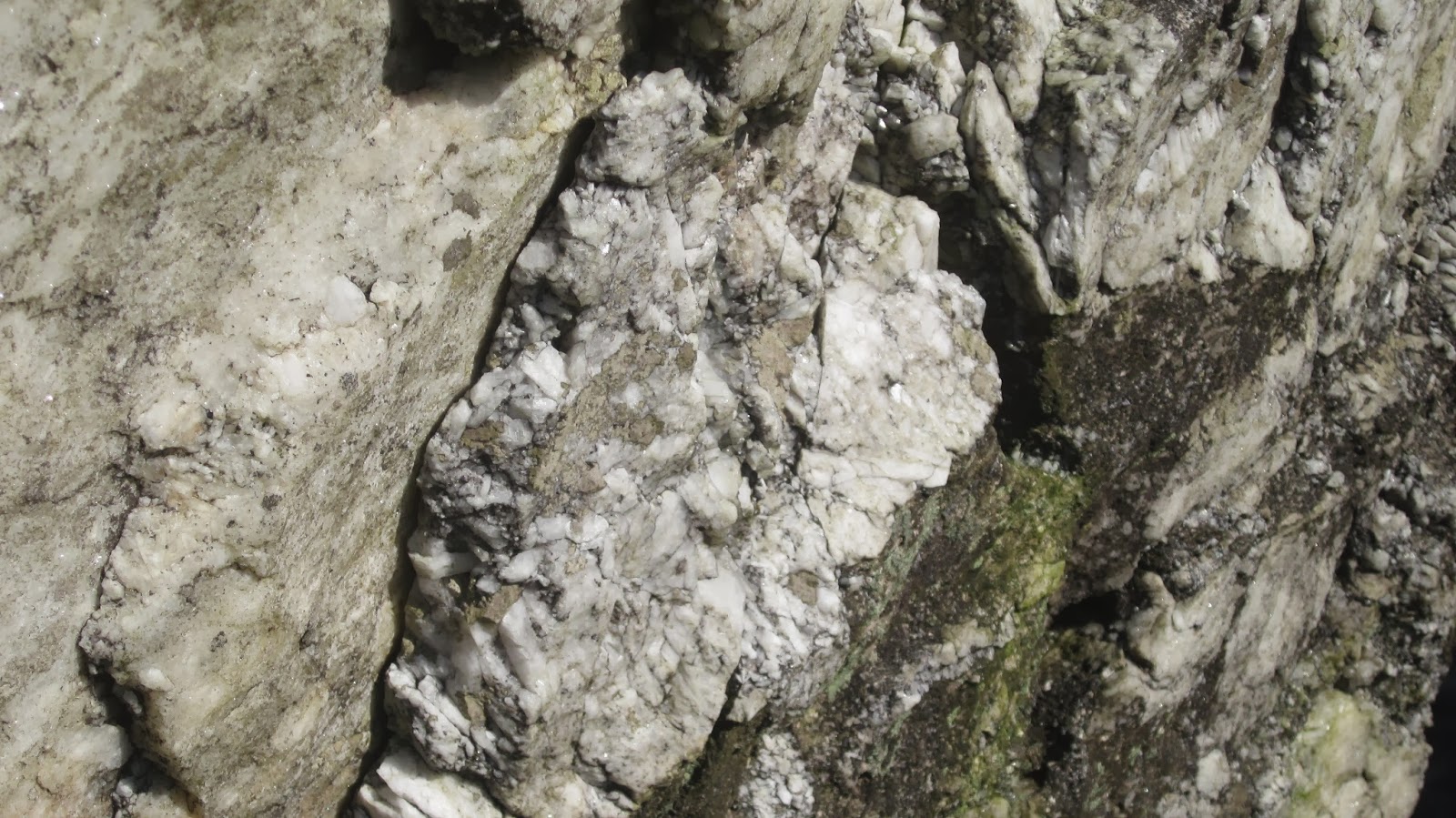 Out early onto the moors this morning in glorious weather, all around the summit of Tuchenn Gador. This is topped by a natural rock formation (not a megalith, although many climb all the way up in hope) of schist and quartzite, hence the sparkles in the surface. Thanks to the mishearing or misunderstanding or sheer carelessness of an 18th century French map-maker who neither knew nor cared about the Breton language, it is often marked Tousaines (All saints) on maps to this day. Tuchenn actually means an eminence or mound, sometimes a burial mound, so Tuchenn Gador (Kador) is the 'mound of the chair,' in the sense of throne-like rocks. The views are exceptional from the summit, taking in the crests all around Lac St-Michel and the widespread tourbières or peat-bogs.
There are many little cairns of stones along the paths to the top, gradually built up by modern walkers and pilgrims. Some want to mark their own passage, out of a sense of personal achievement or in the age-old way of men determined to mark the landscape with evidence of their ability to conquer it. The inspiration of the neolithic megaliths is all around in this part of Brittany. Others are honouring elemental deities and nature itself, for it is on the moor on such a day as today that one is forcefully aware of the interplay of earth, air, fire and water.
Posted by WM at 11:52 am No comments: 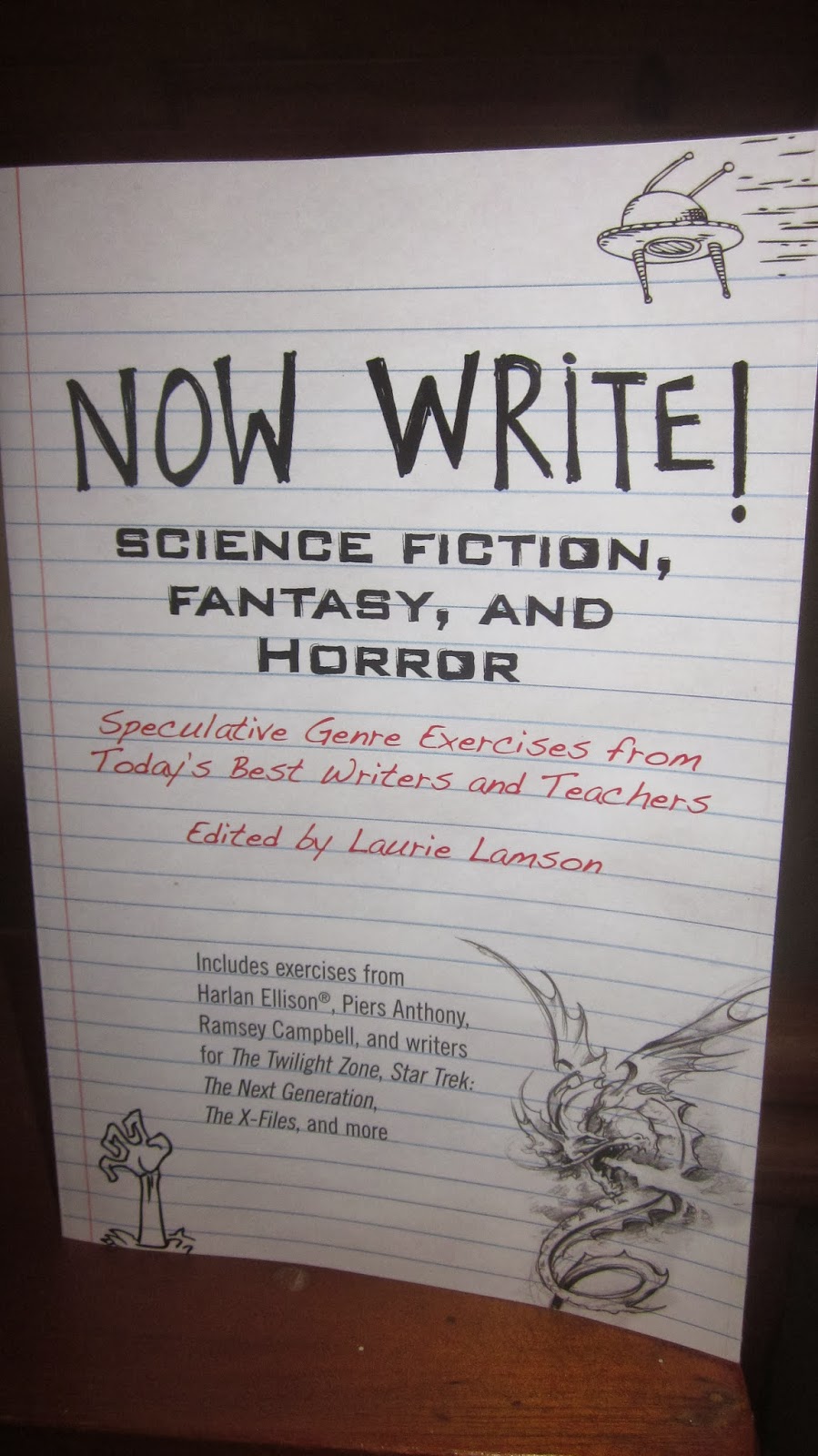 Sadly no rugby today but daffodils were out in my garden to offer a button-hole to celebrate St David's Day. After meeting up with friends who are just back from Hong Kong, I bumped into Fred Dixon at the supermarket. His well-researched novel Ring of Minos (about ancient Thera and Crete) is just out, and definitely a recommended read - available now on Amazon.
I was pleased to receive in the post a contributor's copy of Now Write: Science Fiction, Fantasy and Horror, published in the USA by Tarcher/Penguin. I was asked to do something for this volume a long while back and publication is finally here. My article and creative exercise for those looking to develop their writing skills is entitled Leaping into Landscape, and mostly about the work on forest I was pursuing when the Signal contract came along and distracted me. The Mirror of Landscape themes will now form the major part of my output this year instead, but in conjunction with an artist for a pictures and text exhibition. We have our first meeting on the project coming up this week.