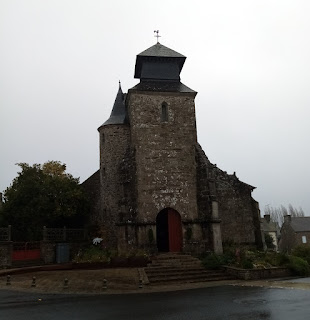 I made a pre-confinement trip on a dreary day this week to Langast to see the church of Saint Gal or Gall, who was the companion of St Colomban, and later went on to found a famous abbey in Switzerland. If he is not some otherwise unknown local hermit of a similar (or different) name. A lack of certainty likewise hangs over the chronology of the construction of the church, which is mainly 16th century but with surviving Romanesque elements, such as a fine example of herring-bone style wall revealed beneath the plaster of the nave. The main window dates from 1508 and is exceptionally beautiful. 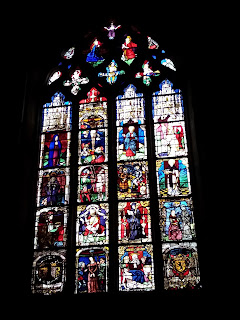 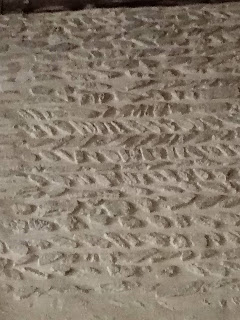 But the church is most famous for the wall-paintings on the underside of arches in the nave, again of disputed date, but probably from style and content 12th century, with some much later additions. Vegetal designs to portray the world and angels like archangel Michael are perhaps the most striking. St Germain of Auxerre, the scourge of Pelagianism, is also portrayed. One of the panels bears tiny details of a fleur-de-lys and hermine, symbols of France and Brittany. 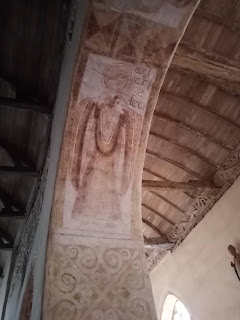 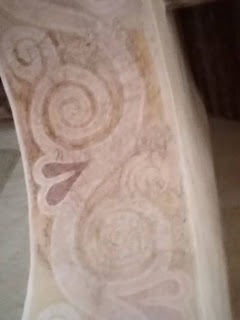 Afterwards, it was really a day fit only for eating pizza with a friend in Loudeac. So I did just that.
Posted by WM at 12:09 pm No comments:

Email ThisBlogThis!Share to TwitterShare to FacebookShare to Pinterest
Labels: Langast 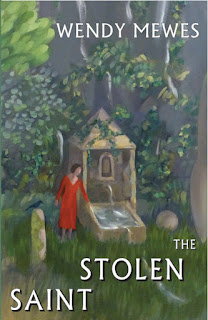 The Stolen Saint, my new novel set in a Breton village, will be published on December 1st. Details of pre-order to come shortly. 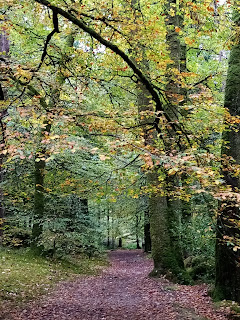 Today was the first really autumnal day of the year, with a mist stretching over the lake and town early this morning. I went out in search of seasonal colour in the forest this afternoon and found it before the rain set in. My novel is all finished now so I have time to reignite the landscape connection that inspires all my work. 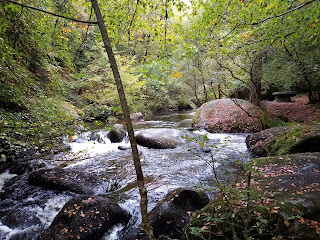 I can't believe someone asked me this morning 'What's next?' Rest, rest, rest. I will have had three books out this year in December. Surely that's enough by any author's standards. But there is a great void now after the intense work of the last six months. I began The Stolen Saint in March during the confinement and actually managed to work consistently through the summer which is usually a non-productive time for me. Still, it was lovely to walk today without the sense of pressure and need to hurry back to the keyboard. And the forest was magical. 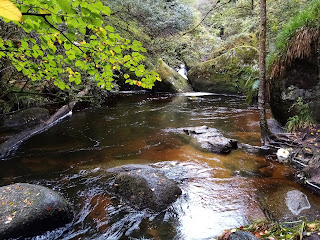