A load of stones 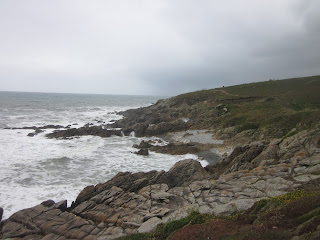 At Menez Dregan today, doing a leisurely circular walk for the new book to take in the magnificent prehistoric site on top of the Pointe du Souc'h. I mention the point because a two-handled rounded pottery vase discovered here in the late 19th century gave the name vase du souc'h to that style of find. The various tombs discovered are the result of nine phases of development of the site during the Neolithic period. Recent reconstruction work has given an indication of the original cairn covering which enclosed the dolmens. 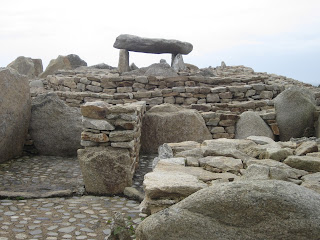 Just down the road is the enormous allée couverte of Pors Poulhan, a remarkable revival after the Germans blew it up in 1942 as an obstruction to their view of the coast. It was still possible to excavate in the mid 1980s and turn up weapons, tools and jewellery showing usage as a burial site from 6000BC onwards. 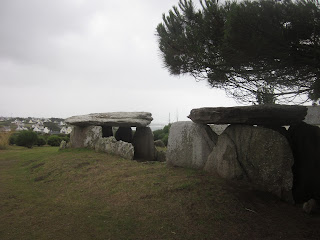 As if this wasn't enough, below the Pointe du Souc'h a paleolithic cave-dwelling from 465,000BC is today carefully protected by a coating of metal plates, its roof having long since collapsed. Here evidence of created hearths, the oldest in Europe, has been found. I was fortunate to be there today at the moment when a team of helmeted workers began uncovering the site, perhaps in preparation for events taking place this week as part of Rencontres Prehistoriques de Bretagne. 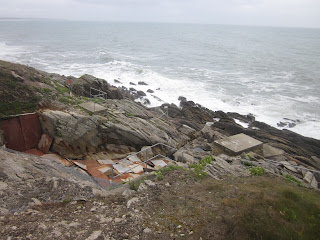 I first visited Menez Dregan many years ago alone, and again in 2007 with the departmental archaeologist Michel Le Goffic explaining the excavations in great detail. Since those times much has changed, from reconstruction work to a smart new visitor centre, large information panels and landscape gardening. There's not much left to the imagination these days and no room at all for any sense of awe. I certainly had that when it was just a load of stones on a headland. Maybe a question of can't see the stones for the words.
Posted by WM at 10:34 pm No comments:


I've been in Cornwall, thinking about rivers and enjoying some trips on the Fal, downriver from Truro and up river from Falmouth, the latter thanks to Alison and John and their little yellow boat. I wanted to see some of the territory from Philip Payton's Rising Ground on the spirit of place, but the book never really came alive for me as it seems more about people than place, apart from a few memorable straight descriptions. I think there is still a significant gap between landscape history and accessing a spirit of place.
Posted by WM at 8:25 am 1 comment: 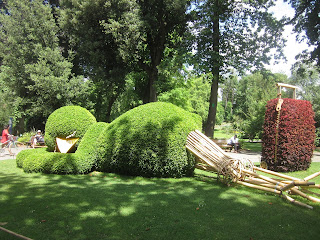 Working in Nantes at the weekend, in sweltering heat. Managed to take a look at some of the Voyage art installations that I've missed in previous visits and as ever enjoyed the sheer blooming vitality of this ever-changing city. It is a place of the present, and light in atmosphere, despite a weighty and dubious historical heritage of wealth based on the slave trade. It would be very hard to be miserable in Nantes... 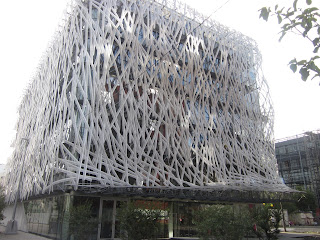 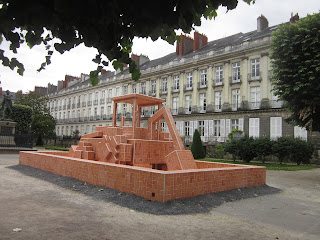 Wit and ideas, an irresistible combination, which makes walking the city streets a real experience and brings the urban landscape into a sharper focus than when it stands alone. There's an infinity more to Nantes than the famous big mechanical Elephant on the Ile de Nantes, perhaps the difference between tourism and enhancement.
Posted by WM at 10:13 am No comments:

Devil always in the detail 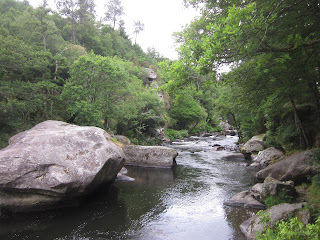 Recently spent a few days walking near the south coast of Finistere, checking routes for the new book. My first stop in a grey early morning was at the Roches du Diable near Locunolé. These rocks form a granite chaos in the bed of the Ellé through a low wooded gorge. After passing along the bank on a level with the spectacle, I followed a long circuit to arrive high up on the opposite bank looking down.
There is of course a legend. The Devil was jealous of the success of St Guenolé in converting the locals and determined to be rid of his rival. As the saint walked by the river in contemplation, rocks rained down on his head, but, by the grace of God, fell harmlessly into the water. A great hand to hand fight then ensued between the two adversaries and Guenolé hauled the Devil down into the river where to this day a bottomless hole lies beneath the waters.
So the landscape was claimed by the church, here as so often elsewhere. The legend does more than trumpet a moral victory over evil: it is a statement of power and possession, the superiority of God to the powers of nature once worshipped by man, an ever-lasting reminder before the eyes of the locals of the supposed might that backs up the earthly dominion of the church.
Posted by WM at 10:21 am No comments: