After my annual long visit to Combourg, where I have been based to complete a chapter called the Devil's trajectory around Dol-de-Bretagne, it's time to take stock of the year's work and my progress along a very decided path for 2019. I arrived home to find author's copies of my little saints' guide  waiting - one objective achieved and a pleasing result of a great deal of effort. Much of the research was done for another saints' project last year, but trying to sift a mass of material for meaningful synopsis is not easy, and to convey complex issues in compact form is a veritable skill. Introduction to the Breton Saints forms a third volume in the series that began with guides to Huelgoat and the Monts d'Arrée, a format that has been much appreciated by very many people. There may well be a fourth topic in 2020, given the success so far. 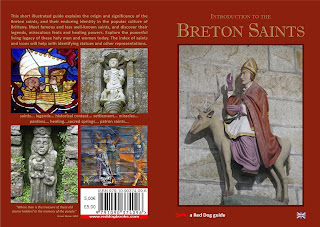 As to the main purpose of my year, the completion of Wayfaring in Little Britain, the journey is far from finished, although I have made significant progress lately. This is the third year of trying: thwarted by serous illness for the last two, I am finding the physical demands of travel, walking and research extremely hard to cope with, but am determined to finish the manuscript by the end of the year, even though the last bit of route coverage is not scheduled until December 26th! With the encouragement of the few readers who have glimpsed the content of this elusive book, this theme of hard-won achievement has crept into the text - quite a change for me to write personally, but it perhaps it is time to be honest about the demands of walking and searching against a backdrop of pain and difficulty. Most people writing about history in the context of landscape are serious walkers covering 30-odd kilometres a day without too much trouble. That has never been the case for me, but I hope there is equal merit in a book constructed around hardship, where a day's walking for a healthier person may turn into two or even three for me on occasion and where considerably more logistical planning is needed.
I hope it can be done. The themes of journeys and different types of walking from neolithic ritual through Roman roads to saints' stories and medieval pilgrimage are fundamental to the discovery of Brittany's landscape and history. It will be a final summary of all my painstaking work in this field over many years, as next year is to be devoted to something rather different...

I have been in Ille-et-Vilaine, revisting the exceptional megalithic site at St-Just, which will figure in my new book Wayfaring in Little Britain. Here a walking trail leads out along the Landes de Cojoux with alignments, standing-stones, tumuli and graves all around for more than two kilometres. The site has been tamed and organised since my last visit to a lonely open plateau which then had little restriction for movement among the stones. It was also a forlorn sight at that time, just days after a major moorland fire had left the scars of burning everywhere, vegetation reduced to ashes and acridity filling the air. Now in late summer there was plenty of plant colour and clean quartz to gleam in the hot sun.
The monuments that I return to again and again are the Alignements du Moulin and the so-called Tribunal, the latter mooted as a stone age calendar, but named for its appearance of a row of judges and the accused. The 12 menhirs of the alignment, made of schist and organised east/west, are like people in their individual shapes, character and relative placings - a family photo covering the generations. Funerary remains found on excavation date to about 4700BC: the standing-stones came later. The function of the stones themselves or their role within the overall structuring of the whole complex is impossible to say. They appear to be on course to meet at a point with the line of chubbier quartz stones to the north. A further north/south line is suggested by a few remaining small stones.
What is so extraordinary about this site is the constant unfolding of remains, the accumulation of death, here, there and everywhere around the main path which forges across the open centre of the plateau. The loftiness of the location was obviously significant, and its dramatic end, abruptly above the valley of the river Canut and the Etang du Val.
On reaching the pinnacle at the Chateau Bu, with its neolithic burial in lateral chambers and later Bronze Age graves and guardian pillars, it is hard to imagine anything better, but huge complexes of inter-related monuments like the Croix St Pierre arrangements await. The place, even over its significant length, has a clearer sense of unity than Carnac, for example, and is to me much more compelling. The main practical advantage is that there are rarely other people to share the scene outside weekends and holidays. This sense of aloneness amidst serial funerary architecture from nearly seven thousand years ago offers a powerful experience and it was a strangely emotional one this time.
After a few days away, I made a slow journey back, stopping off to see if the megalithic site at Monteneuf in Morbihan had changed much over the years. It has, whether for the better or not is hard to say.