St Yves, the patron saint of Brittany and of lawyers worldwide, has enjoyed a tremendously strong and lasting cult centred on the cathedral of Tréguier (which holds the relic of his skull) and nearby chapel in Minihy-Tréguier, the hamlet where he was born. But just across the Jaudy estuary near the shore at Trédarzec, once stood a chapel dedicated to the saint with more sinister practices.
Unusually for a Breton saint, Yves was both a real person (in the late 13th century), and an actual official saint, canonised by the pope in 1347. Renown for his passion for helping the poor which led to giving away most of what he had and favouring them in decisions he made as an ecclesiastical judge, he was a synonym for justice and truth. At some point by the early 17th century this reputation had developed a very particular application in the form of St Yves de Verité (Erwan ar Gwirinez or Santik (little saint) ar Wirione in Breton), with a case attested in 1620 when a woman sought vengeance on the landlord who had accused her son of arson. This was indeed the purpose of the cult: a petitioner who felt himself wronged would make a bargain with the saint, calling down vengeance on the guilty party. If his accusation was false, he would suffer the same punishment - death within a year.
The ritual consisted of pilgrimage (in a state of fasting) to the chapel at Trédarzec on three consecutive Mondays as night fell. The petitioner then grasped the shoulder of the statue of St Yves and shook it sharply. This could be because the place was ill-frequented and Yves might have dozed off a bit, but in fact violent treatment of saints' statues by worshippers was widespread in Brittany. Whilst doing this, the petitioner would say the portentous words 'You are the little saint of truth. I make this vow to you. If he is right condemn me. But if I am right let him die within the appointed time.' A coin marked with a cross would then be placed at the foot of the statue, before the customary prayer of a vow would be said BACKWARDS, a clear echo of pagan magic ritual where curses often employed this method. Three ritual circuits of the chapel then followed. Another account says a cobblers' awl was left handy in the chapel for piercing the statue three times, to make a little dust, so anticipating the fate of the guilty party.
It was once thought this strange cult began just after the Revolution, a time of excess and the suppression of conventional religious practice. In 1792 a document records that the chapel was one of several in the area closed and without petition to reopen it. The building itself began to decay but remains and two statues were still seen in 1881. The poet Brizeux called it 'cette chapelle horrible' in 1845 and this 'cult of hatred' was well-known (and presumably well-used). The chapel was destroyed by order in the 1880s to put an end to what the church saw as barbarous practices, but when the statue was removed to the priest's courtyard it remained a focus for petitioners. He finally hid it in the attic of the presbytery.
The matter was somewhat blurred by the great folklorist Anatole le Braz, who wrote in 1893 that the cult had originally been of St Sul and the chapel destroyed after a notorious murder case in which an old woman claimed to have been asked to carry out a vow of vengeance. In fact the chapel had already been destroyed by then, but a nearby oratory, which still exists, may have caused some confusion. There is also reference to Notre-Dame de la Haine by Emile Souvestre in 1836, but perhaps this was a casual deduction from the standard 'Ave Maria' to be said three times in the course of the ritual.
The attempted destruction of superstition was always an act of folly by the Church - it is the very strength of Breton faith whose tenets are set by the people and their will. God himself would be hard pressed to make impositions on a Breton. Let's not forget we live in a world where recently made statues of unknown saints are said to be working miracles. Today there is apparently a freemasons' lodge at Tréguier with the title Erwan ar Gwirionez. Good luck with that.
Posted by WM at 4:38 pm No comments:

So very sad to hear of the sudden death of my dear friend Christophe. He was a lovely man and an exemplary writer, devoting much of his time to research and managing to turn that into a prolific output. I was delighted to translate one of his booklets 'The Holy Grail and Brocèliande in Dol-Combourg' to bring his work to the attention of anglophones, and this investigation did indeed make its mark in the world of Arthurian studies, through the interest of Geoffrey Ashe.
I first got to know the work of Christophe's late brother Marc Deceneux, an historian of repute, who wrote extensively on the area around Dol and Combourg. During a month's stay for research of my own in Combourg years ago I was introduced to Christophe and his charming wife Jacqueline, and through them became friends with the La Tour du Pin family, owners of the famous chateau. These connections have been of immense importance to me, and my attachment to Combourg remains profound.
Christophe's interests were wide, but recently focused on the curious, alchemic and esoteric. He published Finis Gloriae Mundi de Fulcanelli, La Révélation in 2016. More recently he was working on a novel in conjunction with another writer. The research that brought us together, on the 'location' of the literary forest of Brocéliande in the tales of Arthurian knights, made a big impression on me, going against received notions here in Brittany that the forest of Paimpont was the original inspiration - not at all likely, as Christophe demonstrated convincingly. Exploring the Dol/Combourg area to follow up his leads was an adventure and a revelation.
I will never forget his kindness and enthusiasm for history and imagination. I shall sorely miss sitting in his garden talking over the latest research and going on a little trip of exploration with both Christophe and Jacqueline, as we did one happy day not so long ago. It seems long ago now, the separation of death harsh and decisive. But I was very lucky to know him. 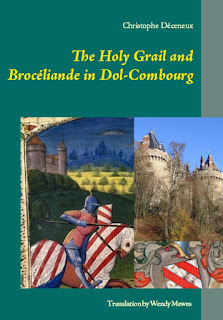