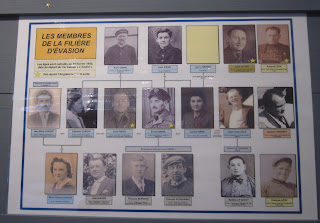 I had the good fortune today to be given a personal tour of the Musée Maritime in Carantec by Jean-Pierre Daffniet, President of the museum association.  On one side of the road there's a well-presented room devoted to resistance evacuations from Carantec to England during WWII, plus a highly symbolic artefact - the actual boat, Le Requin (The Shark), in which local boat-builder Ernest Sibiril got a small group away on October 31st, 1943. Among these was George Wood, an English pilot who miraculously escaped after his plane exploded over Ploujean and was hidden for months by the resistance before being taken across to Plymouth. J-P Daffniet spoke movingly of his recent encounters with George Wood, who visited Carantec and Morlaix in 2010 at the age of 90.
Across the road the main building has two large rooms of maritime memorabilia such as objects recovered from the Malouin corsaire ship L'Alcide, which went down nearby in 1747, numerous models of boats and some curiosities like scrimshaws and, weirdest of all, a tiny model of an allied plane made by the Germans to educate anti-aircraft gunners about what to look for overhead.
What I particularly liked about this museum was that all temptation to chuck in anything vaguely related to the themes has been resisted: what is here is a telling local record of important experiences. Many of the families involved in war-time activities are still here, many buildings where allied airmen and Free French fighters were hidden under the very noses of large German contingents remain. The emphasis is on individuals, who spring to life under M.Daffniet's articulate rendering of quiet heroism and fortitude in a time of profound uncertainty and danger. His narrative brings home the extraordinary responsibility and risk borne by almost the entire community of Carantec to shield and succour those who needed to be saved.
It is a proud, though sobering memory that belongs collectively to its community, however much it also represents a piece of the jigsaw of events repeated all along the north coast. The museum association is not just preserving the past but transfering local heritage - a precious possession - from one generation to the next so that no-one will forget what has shaped post-war society in Carantec.
Posted by WM at 7:43 pm No comments: 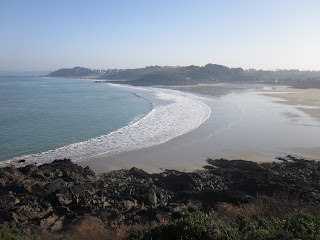 Glorious walking today from Beg an Fry to Toul an Hery. I am nearly at the end of my very long journey for the Saints' Shore Way, having cunningly done the last section first during the summer months.
Posted by WM at 10:52 pm No comments:

Watching the BBC Alba documentary about Montecassino last night was an emotional experience.
In 1972 I walked the site of the siege with my father who fought there in WWII, spending a month in a freezing, mud-bound hole in the ground under heavy fire. The Scotsman interviewed on the programme had exactly the look in his eyes, the sudden tremble in his voice when he recalled going back to visit the war graves as I witnessed in my father's deeply moving reaction to returning to the landscape where he spent the formative period of his life. He fought elsewhere during the long years of war and wrote a memoir of his time as a soldier entitled A Good War, a characteristically ironical title with massive subtext.
But the intense physical, emotional and mental ordeal of Montecassino stayed with him. From it grew, almost as a reactive healing instinct, an equally intense love for the land of Italy. The happiest times of his life were spent walking and hitch-hiking about that simple, passionate country in later years.
It is true that suffering can create strong bonds with landscape that has shared it. In a Somerset village I became great friends with an elderly man who had also fought in Sicily and then Italy. He took up painting in middle age, and his scenes of the Italian coutnryside - in better weather than the incessant rain that beleaguered the Montecasino action - reproduced exactly that particular bond of affection for a landscape that only adversity can breed.
He gave me one of these images that still brings tears to my eyes for all it says to me of a beloved father, who found life hard in many ways and whose powers of emotional expression were crushed in a conflict that both bound him to mankind in general and separated him from individuals for a long life-time.
Posted by WM at 10:07 am No comments:

Email ThisBlogThis!Share to TwitterShare to FacebookShare to Pinterest
Labels: Montecassino

The start of strange 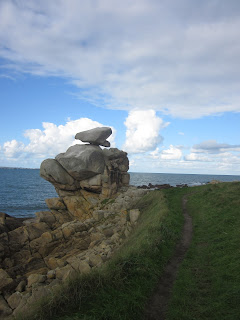 My walking is just reaching the beginning of the singular granite rock formations (here the Pierre double) that culminate in the monster rocks of the Pink Granite coast. I prefer it here, simpler and more effective.
Now taking a few days rest to try to alleviate the severe back pain that's hampering my journey. 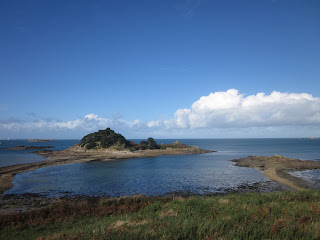 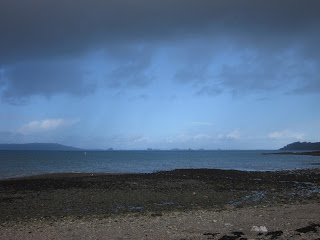 The Saints' Shore Way project is now full steam ahead and I must finish walking the 125km route asap. Although none of this coast path is new to me, it often appears so as I am walking from west to east, contrary to my usual (and preferred) practice. The changes of weather from one minute to the next make November a dramatic time for views and sensations, with storms tracing their path across moody seas to dissolve in rain or rainbows against dark landfall lit to brilliance by dashing sunshine seconds later. Sometimes the air is so still it feels as if the globe has stopped turning; then simply round a headland and I must pocket the tape-recorder or GPS or camera to have a free hand to hold my hat on. It all contributes to a good night's sleep after any day spent on the SSW.
Posted by WM at 11:55 am No comments: