Dol and the rewriting of history 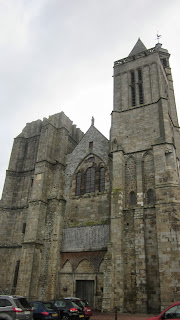 The gap between tourism and history gets ever wider. Dol-de-Bretagne now hands out tourist information stating prominently that Nominoe was crowned first king of Brittany at the cathedral here in the 9th century. There is even a recent statue of that great man wearing a crown opposite the cathedral entrance. Perhaps this is a response to falling visitor numbers; it is certainly a case of self-aggrandisement.
The 'evidence' for Nominoe's coronation comes a text from hundreds of years later, suddenly appearing at a time when the status of Dol cathedral was under threat and its challenge to the Metropolitan see of Tours was about to be put to rest. Contemporary documents do not use the title king, not even in the Cartulaire of Redon Abbey, an establishment he was instrumental in founding. It's all a bit like Glastonbury Abbey miraculously discovering the grave of King Arthur just when funds were short .... any legend in a storm.
Nominoe's actions regarding Breton bishops and episcopy of Dol in particular are complicated and difficult to interpret confidently - such is the fascination of the 9th century in Breton history. His son Erispoe certainly has the status of king, a reflection of his achievements against Charles the Bald,  but to claim definitively that such an event took place with Nominoe is a travesty, a triumph of competitive tourism over intelligent presentation of historical issues.

Email ThisBlogThis!Share to TwitterShare to FacebookShare to Pinterest
Labels: Dol-de-Bretagne 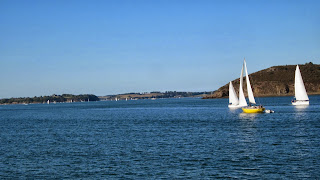 What an amazing day to be cruising on the maritime section of the Rance!
Posted by WM at 10:49 pm No comments:

Email ThisBlogThis!Share to TwitterShare to FacebookShare to Pinterest
Labels: Rance

Not a bad place to be buried 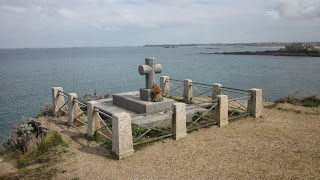 Spent a day around St-Malo today, including a visit to Chateaubriand's grave on the island of Grand Bé as the tide was low enough to give access. I've been thinking and writing so much about him in the context of Combourg - where he lived in formative teenage years and which remained the scene of his 'madeleine' moments, a touchstone of his identity, for the rest of his life. He was born in St-Malo, and his fame and significance managed to persuade the municipal council and the 'department of war' to whom the island belonged to agree to his request to buried in a spot where the only sound would be the wind and waves (and the piercing shrieks of lunch-hour school kids echoing across from the town beach).
Posted by WM at 10:54 pm No comments: 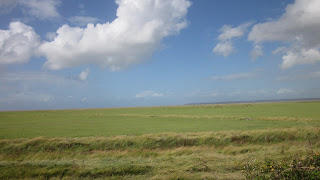 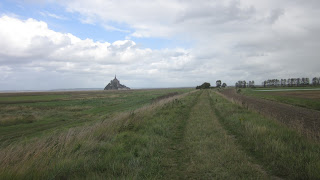 Long walks today across the polders in the Baie de Mont St-Michel and I have the wind burn to prove it. Sun and showers coming and going all the time but constant blasts of up to 50mph with nothing on those flat lands to impede their force. I'm happy to look at the Mont itself from a distance for the moment and have no intention of revisiting until 2015 when it will have been returned to its natural island state. Destroying the causeway which has so disturbed the currents and tide of the bay and replacing it with a low passerelle will achieve this effect. Until that's done it's all a bit of a mess.
Posted by WM at 7:19 pm No comments: 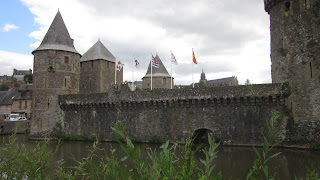 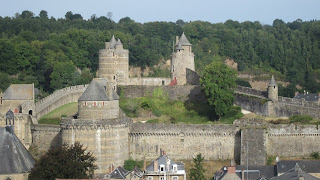 High on the list of my all-time favourite places, Fougères has one of the best castles in Europe and inspired settings for novels by Victor Hugo and Balzac. The old town in the Nancon valley contrasts with the mainly 18th century High Town where there's a statue of the Marquis de le Rouerie, founder of the original Association bretonne in 1791 and key anti-Revolutionary figure. After lunch at Le P'tit Bouchon in rue Chateaubriand - Eric and Isabelle's welcome and cooking recommended - I had a pleasant afternoon in the adjoining beech forest, with 12th century cellars, megaliths and lots of good walking to enjoy.
Posted by WM at 10:22 pm No comments: 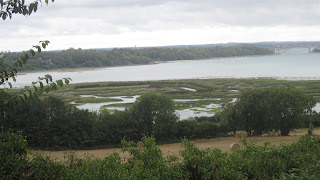 After a sunny walk along the Rance at Taden with my good friend (and nature expert) Lesley, I went further north in search of the 10th century Viking camp at St Suliac, lying greenly in the bed of the same river at low tide. It is best viewed from Mont Garrot, a spectacular viewpoint over the estuary in both directions, and of course the burial site of the giant Gargantua. They had to fold him in seven - it's not a very wide hill...
Posted by WM at 8:14 pm No comments:

In Combourg on the eastern edge of Brittany, on Chateaubriand's literary trail. He grew up in the castle here. 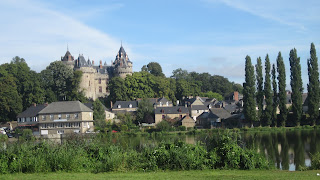