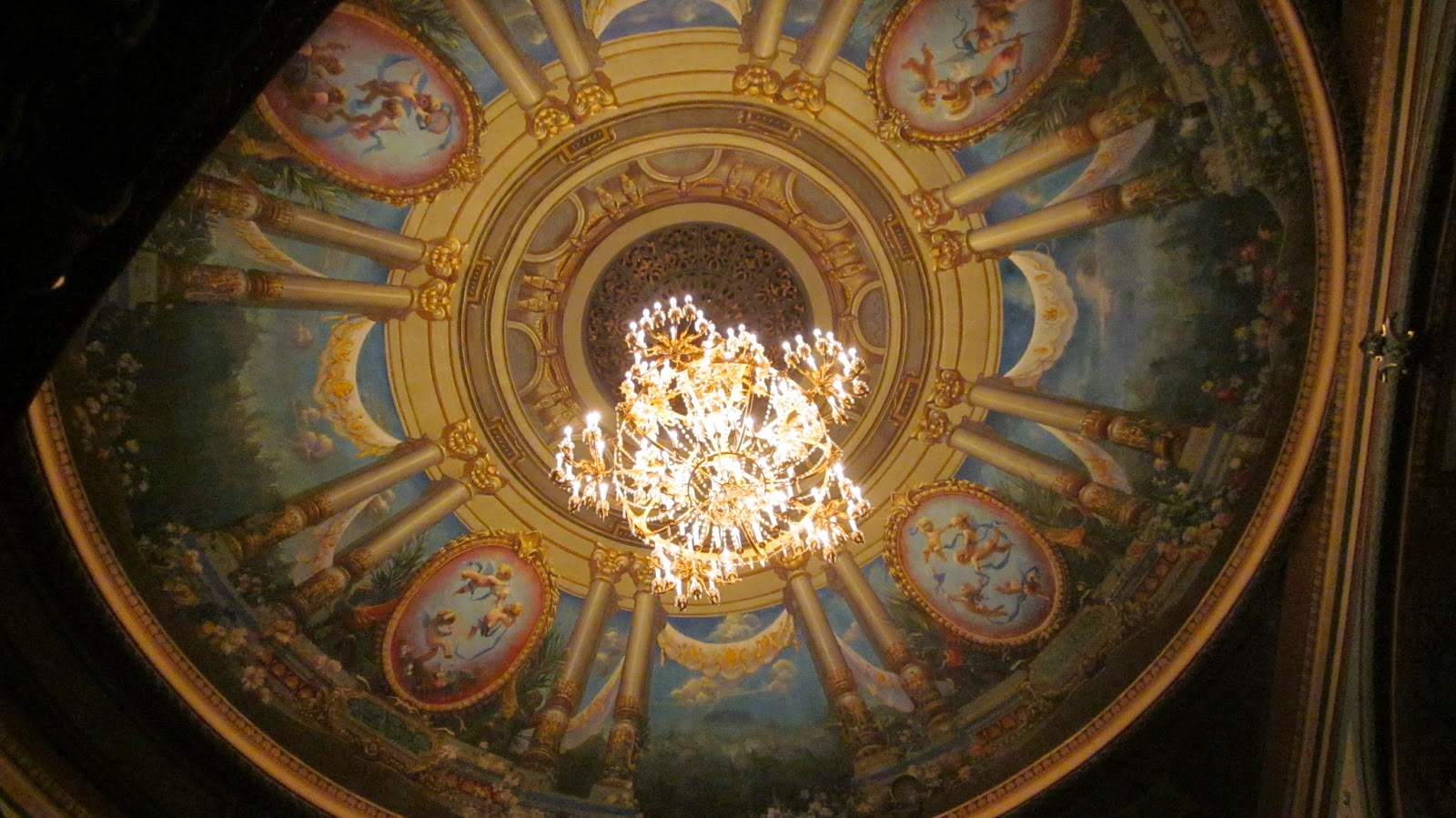 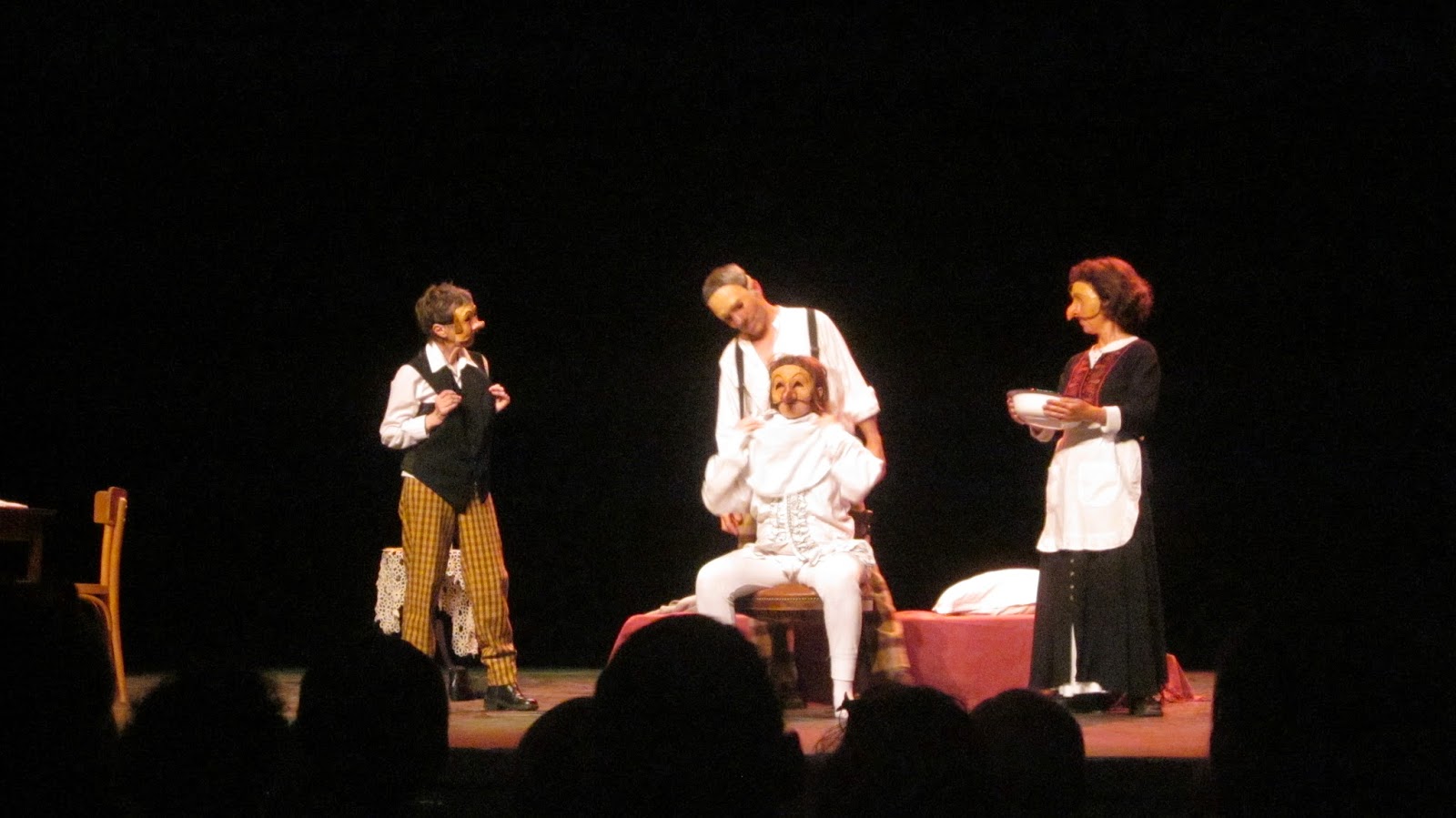 Went to the theatre in Morlaix today to see a friend perform in Gogol's The Nose. It's many years since I saw a play here and the theatre has had a complete refit to restore its Italianate splendour. It's also a very long time since I saw this particular play in London, and I liked it rather better in this masked version staged by Pascal Péron. Great experience all round. Congratulations, Jeanne! 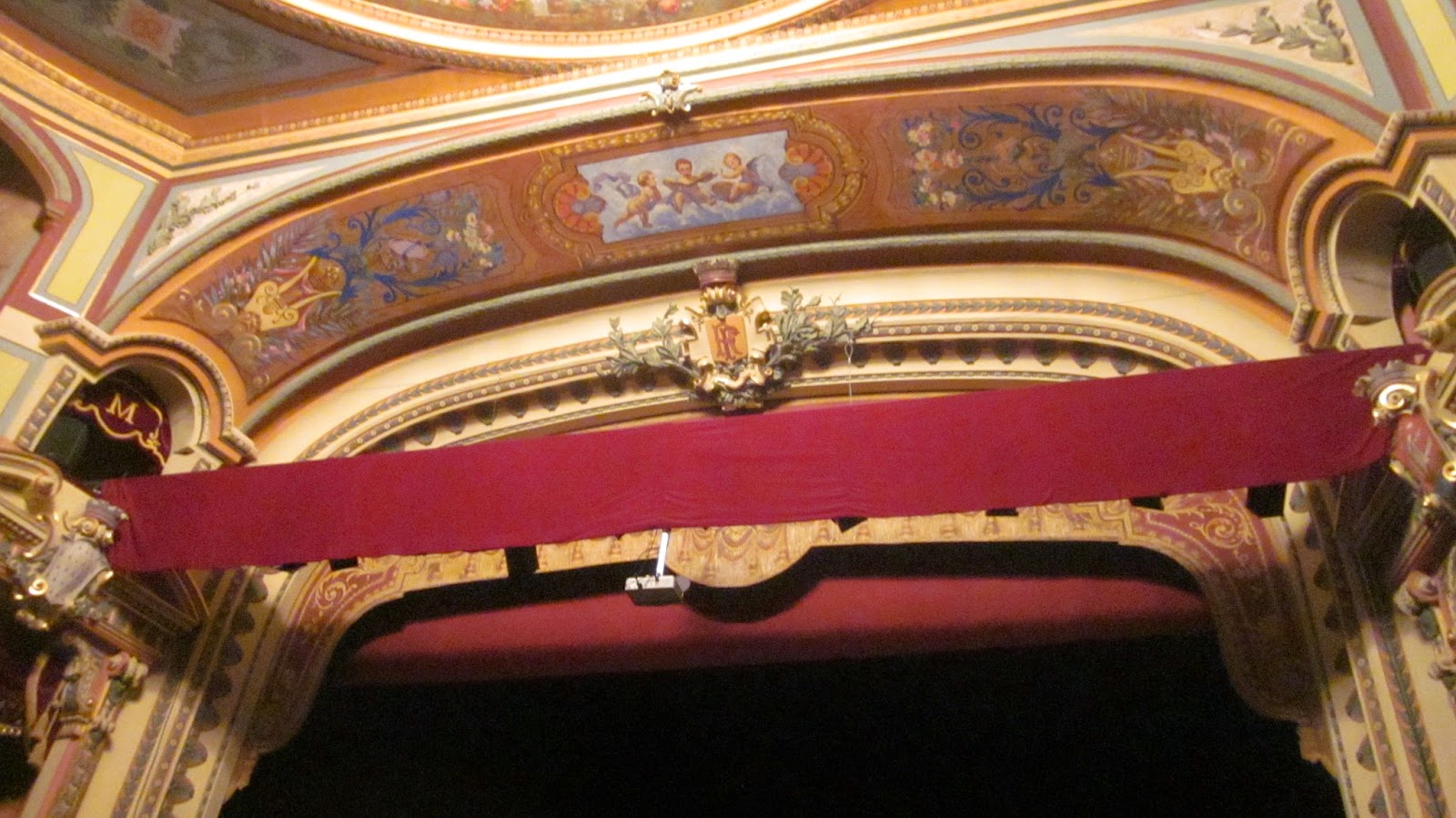 I was in Morlaix again yesterday giving a guided visit to a small group of British people who (mostly) live in the area. The focus was on the river, a confluence of the Jarlot and the Queffleuth, which flows out 24 kilometres beyond the town into the Channel at Carantec, past the Chateau du Taureau, a fortified island. 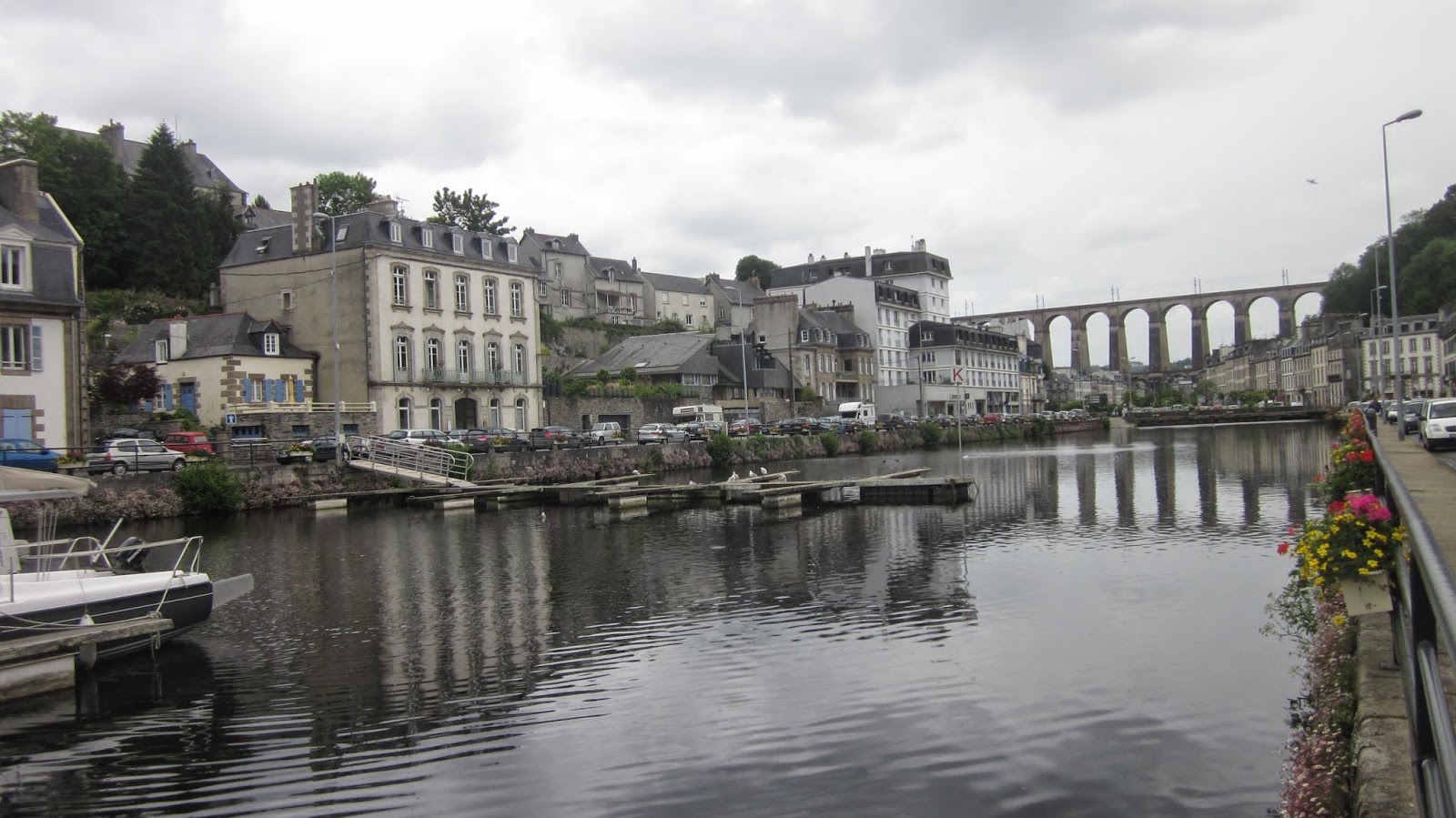 The original impetus for establishing the latter in 1544 was an up-river raid by the English in 1522 which led to the sacking of Morlaix and severe economic hardship before the medieval port could recover its prosperity. This was based primarily on the cloth trade with England and Spain, although paper, leather and butter were other exports. Morlaix was also an important stop on the wine route from southern to northern Europe.
A more unusual economic strength was the tobacco industry, established on the Quai de Léon in 1736, having started out at the Manoir de Penanru on the opposite bank about fifty years earlier. Success demanded larger premises as the huge structure which remains today indicates. The factory only closed in 2004, although by then only 38 workers out of the thousand-odd employed in the heyday remained. Apart from the cigar production for which 'La Manufacture' was well-known, the business was also socially progressive, providing a creche, literacy classes and sick-pay.
We also had a look at the memorial of Tristan Corbière (and his father Edouard), and I read a short extract of the La Pastorale de Conlie to give the flavour of this avant-garde poet who died at 30 with just one self-published volume - Les Amours Jaune - to his name. His posthumous fame came from the acclaim of Verlaine: 'son vers vit, rit, pleure très peu, se moque bien et blague encore mieux.' The scandal of Conlie, during the Franco-Prussian war in 1870, where Breton conscripts were kept in camp in appalling conditions apparently because French generals feared 'an army of Chouans' (the counter-Revolutionary movement that had seen strong support in the Vendée and parts of Brittany) is a powerfully sour memory in Franco-Breton relations. The Bretons were finally sent ill-equipped into battle as canon-fodder: the French baying "Good dogs" as Corbière puts it. 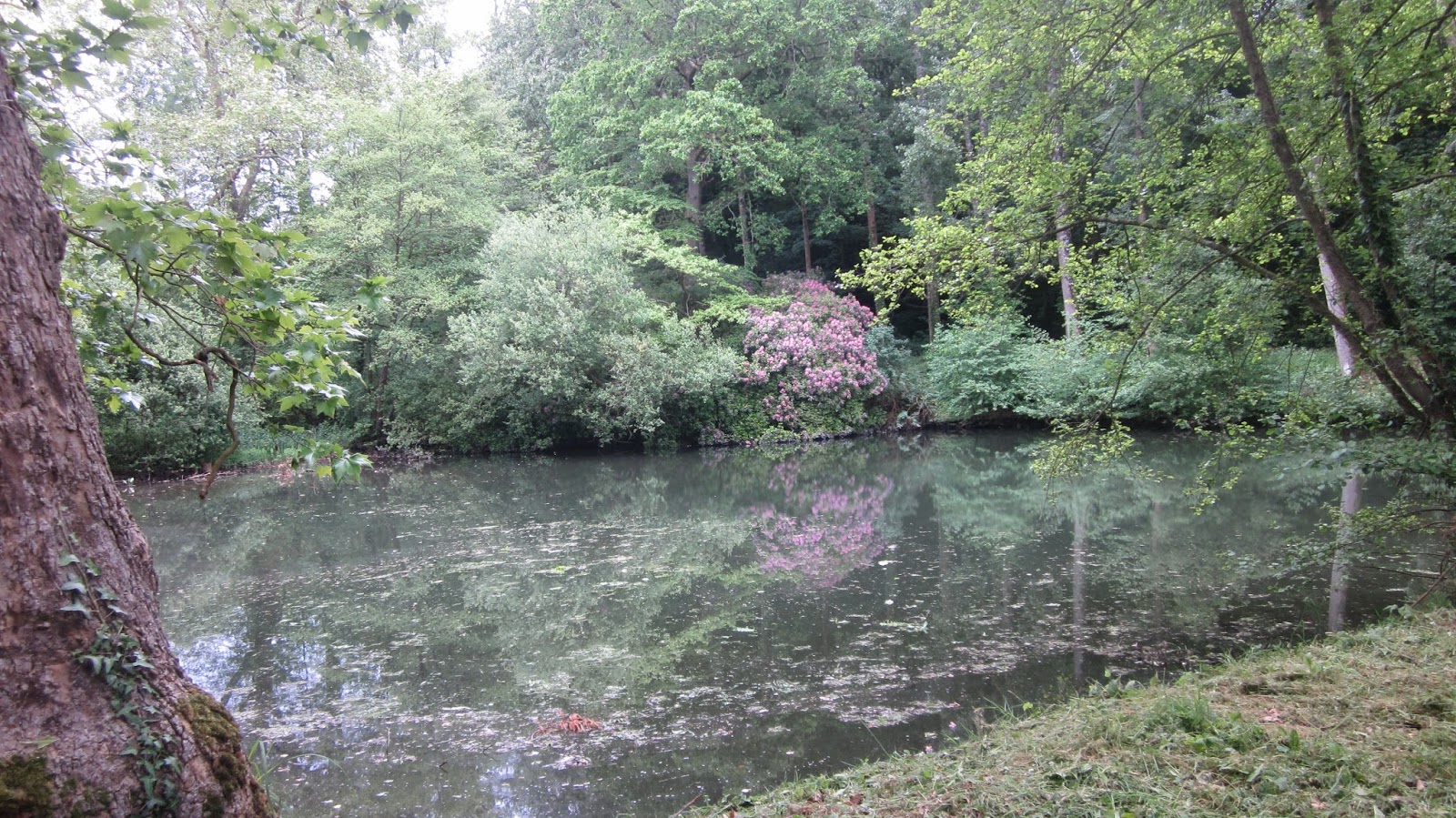 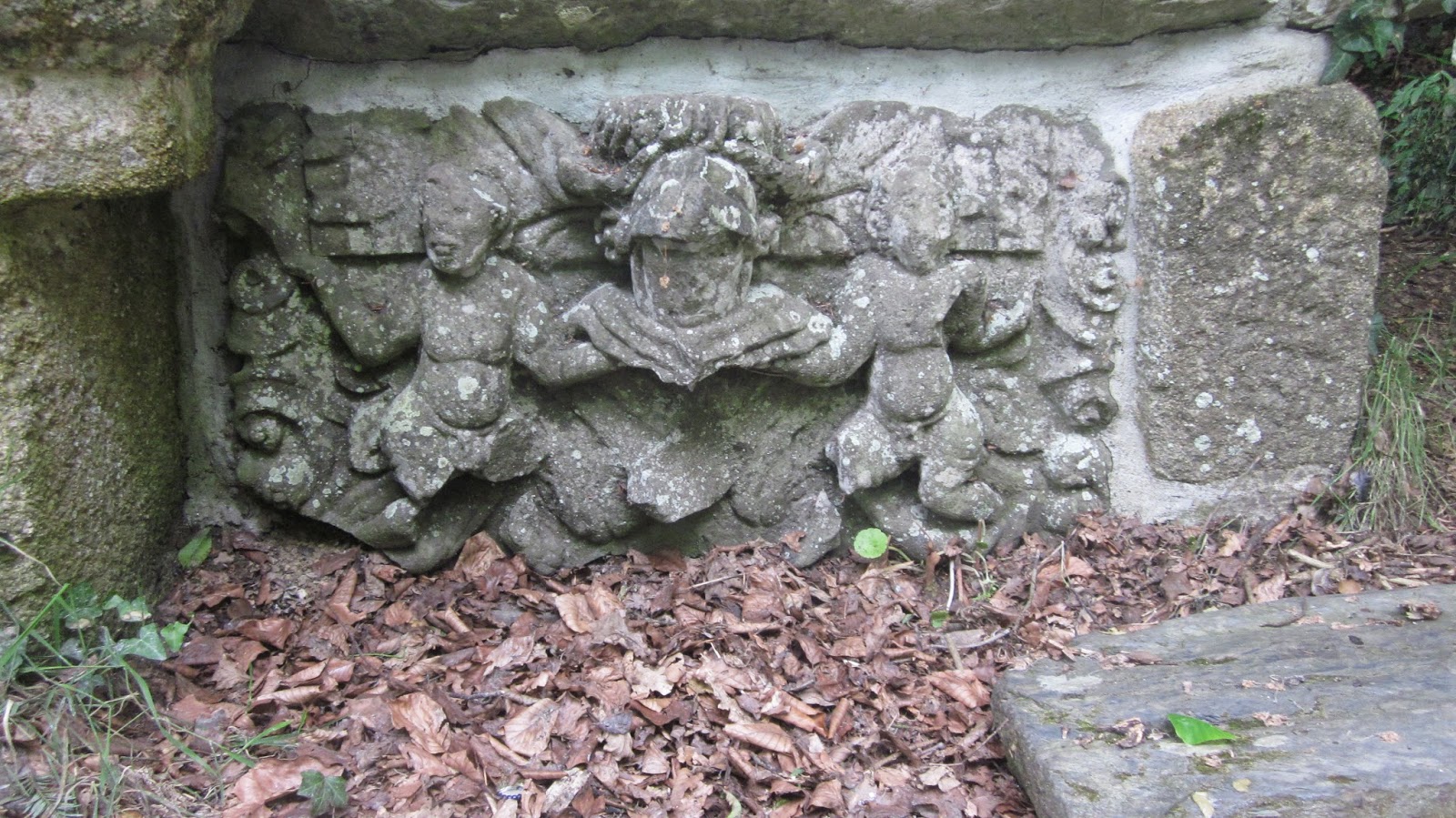 The final stage of our tour was to the grounds of the Chateau de Kernanroux, where we got some much-needed shade from the strong sun, and did a little tour of the dovecote, cascade, lake and ruined medieval chapel with its fine carving. This is a concessionary route, with no access to the chateau itself apart from a brief glimpse of the rear façade if you continue along the GR footpath to the village of Ploujean. The sunken heart of the park around the lake feels like a secret place, and it well provided the 'special' element I always like to add to a guided visit.
Posted by WM at 9:50 am No comments:

Email ThisBlogThis!Share to TwitterShare to FacebookShare to Pinterest
Labels: Morlaix 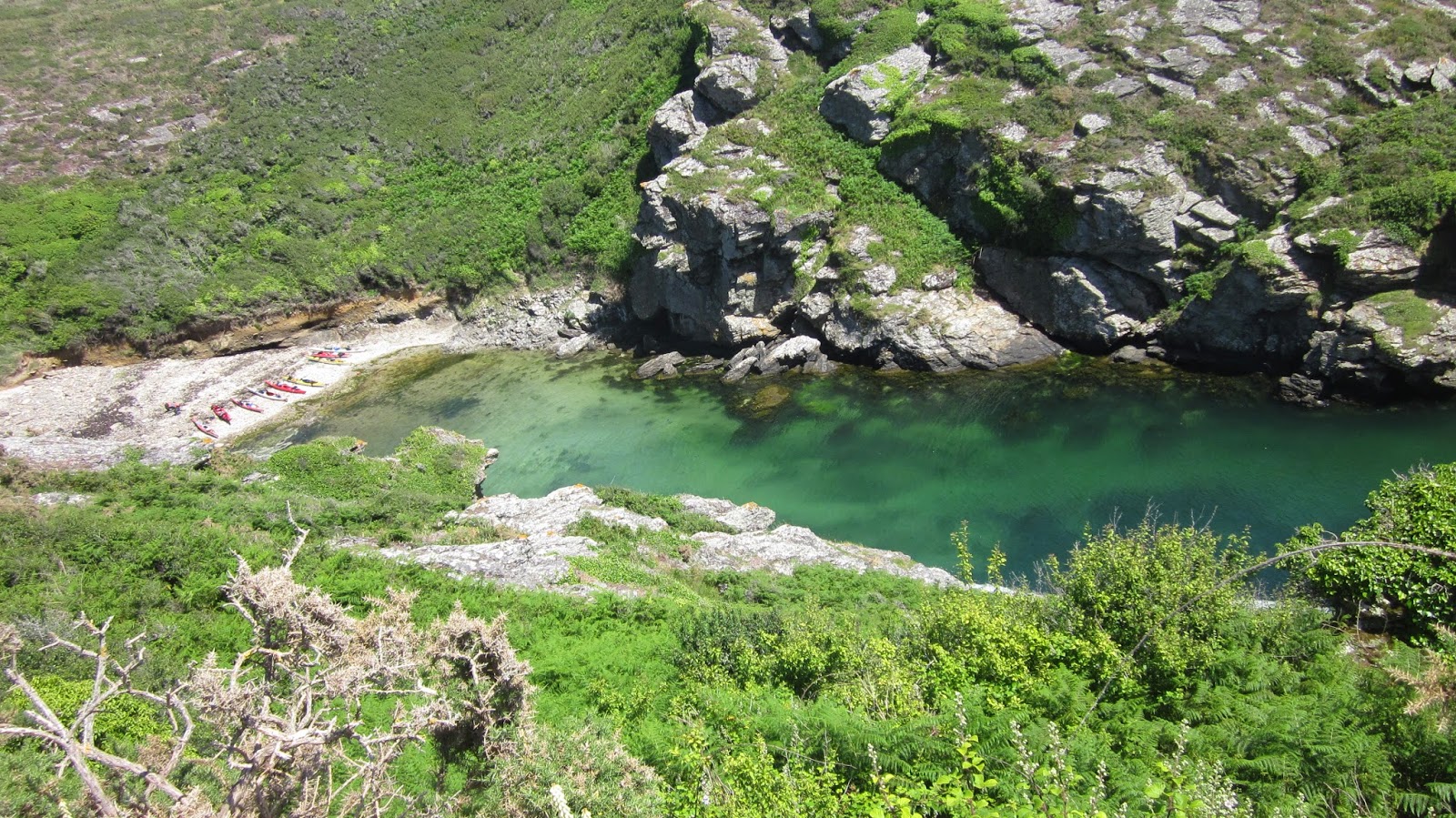 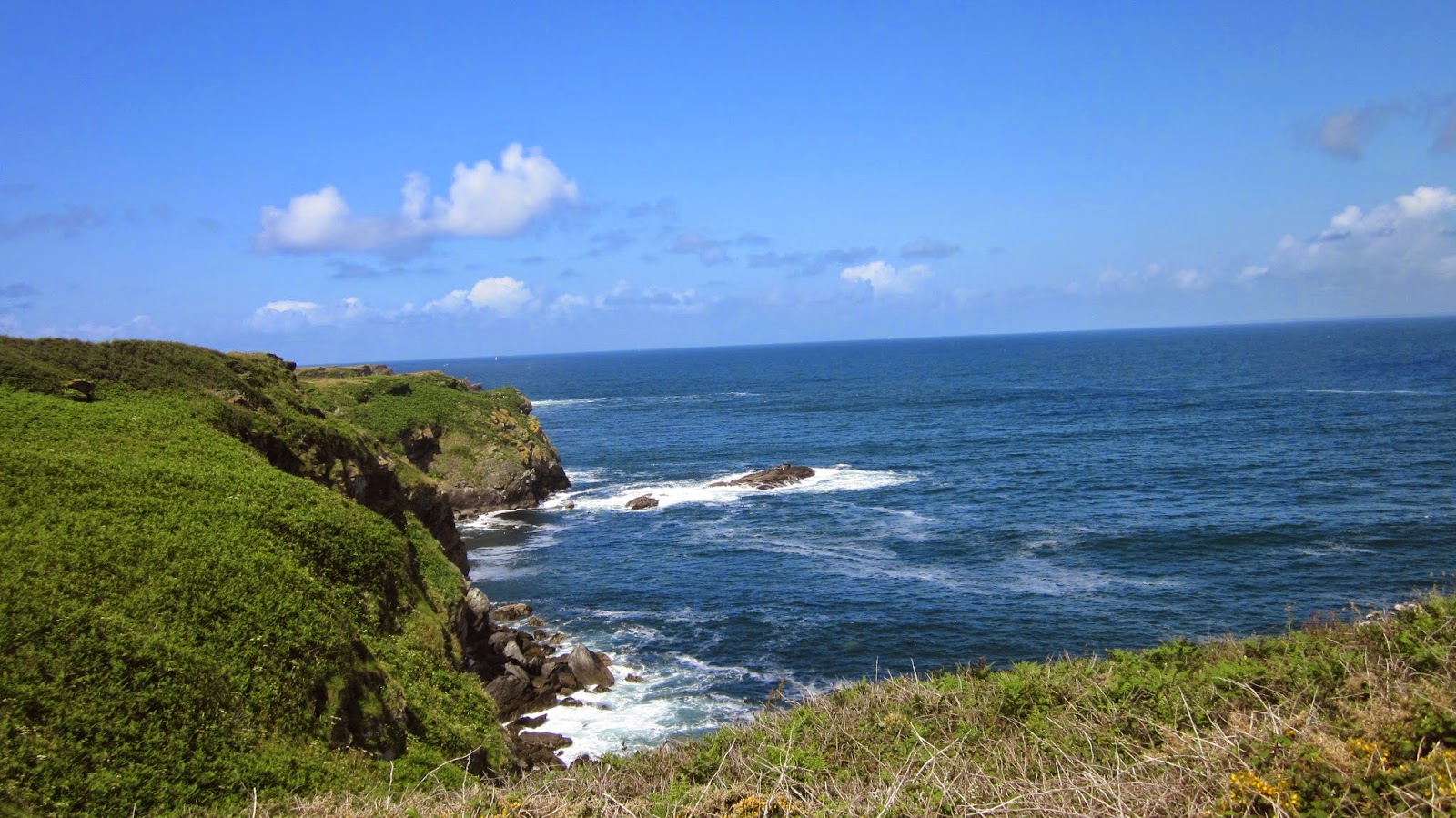 I have just been walking on the Ile de Groix, 10 kms off the south Brittany coast. Tex (issued with his own ticket!) and I got an early morning boat from Lorient and after a quick coffee/pain au chocolat in my favourite port café, set off westwards towards the Cote sauvage. At first this was re-tracing my steps of last year when I came in search of the roots of Breton poet Jean-Pierre Calloch, who was killed in WWI. His statue on a gorsey headland was just as moving on a second visit. Then off into the loneliest part of the island - in fact I didn't see a single other walker all this first day, just a small group of bird-watchers on the nature reserve - and it proved a very long, very hot walk with some spectacular scenery, like the Iron Age fort Camp des Gaulois, and some infuriatingly poor signage adding extra kilometres. A local kindly then provided a lift to the villlage in the interior for our overnight stop, and a really pleasant experience this turned out to be (thank you Christiane). Walked into the bourg of Loctudy to pick up food and then both dog and I very happy to lie down for the rest of the evening.
The next day we started off early for the Trou d'Enfer, before continuing along the south coast to a welcome stop at the bar in Locmaria before following the sea past the Viking burial spot to the geologically famous section with its blue and green rocks, many studded with garnets, and everywhere the micaschiste shimmering like silver and gold. It was even hotter than the first day and I decided to change the plan and take a long rest on a beautiful beach with some welcome cooling of the feet (all six of them) in the sea before striking off inland. Unlike many of the Breton islands, the interior of Groix is quite varied and interesting. I was surprised to discover a good-sized lake, luckily with a shady seat. After a long slog back to the bourg and a brief ice-cream stop, we went down to the port and waited for the boat back. 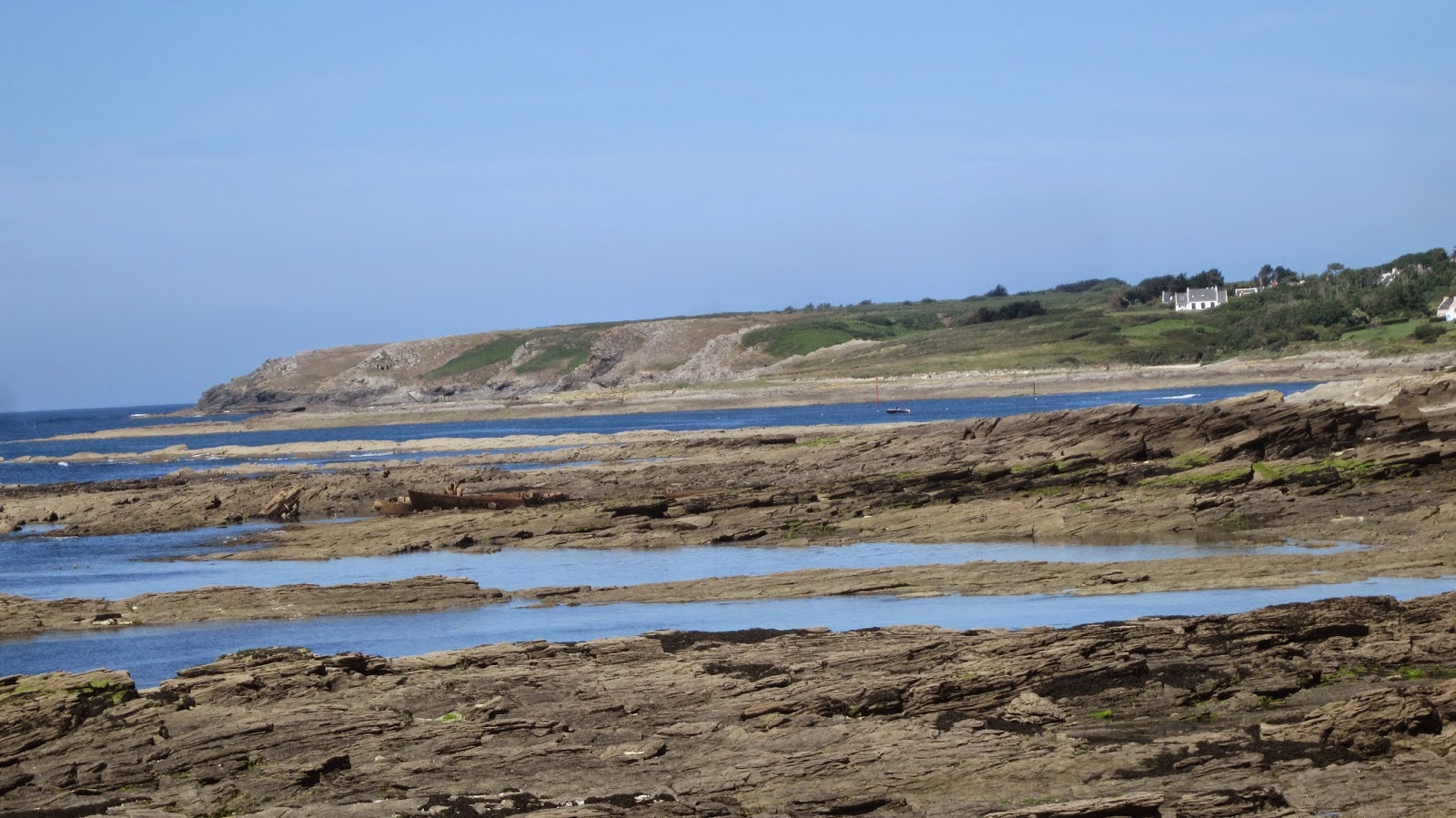 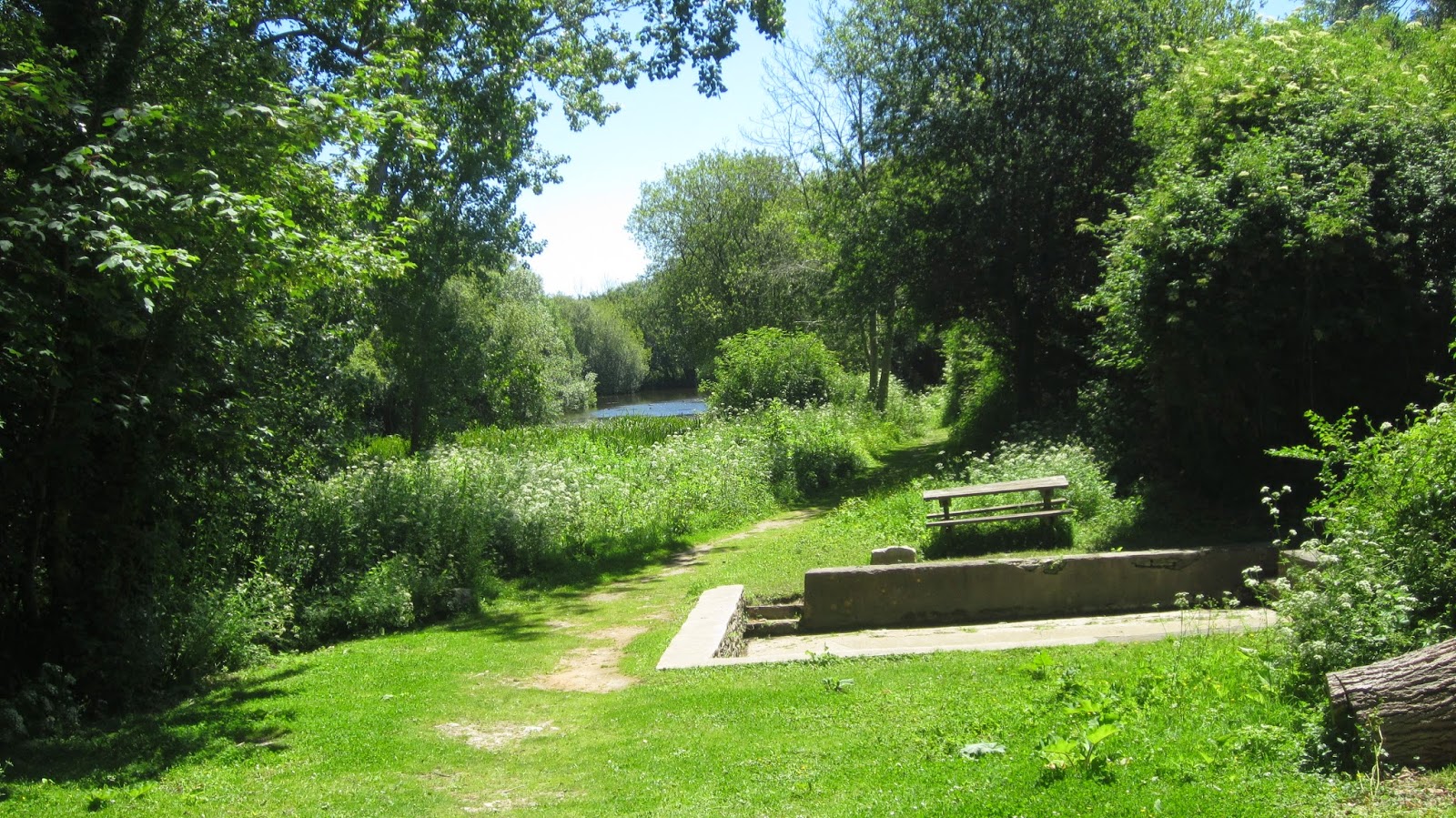 So that's the summer holiday over. Just as well there's the World Cup, Wimbledon and the Tour de France to keep me occupied...
Posted by WM at 10:27 am No comments: 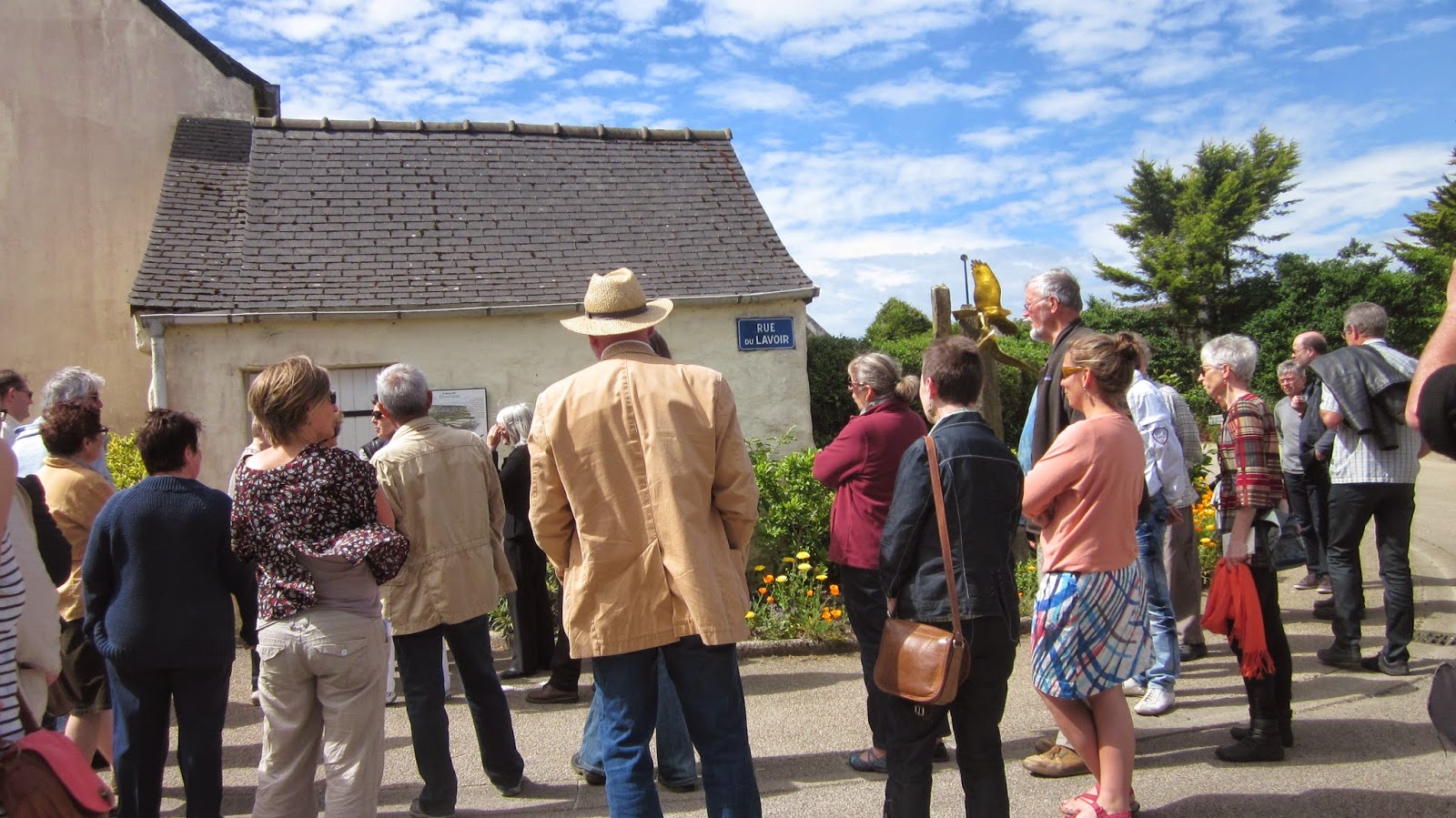 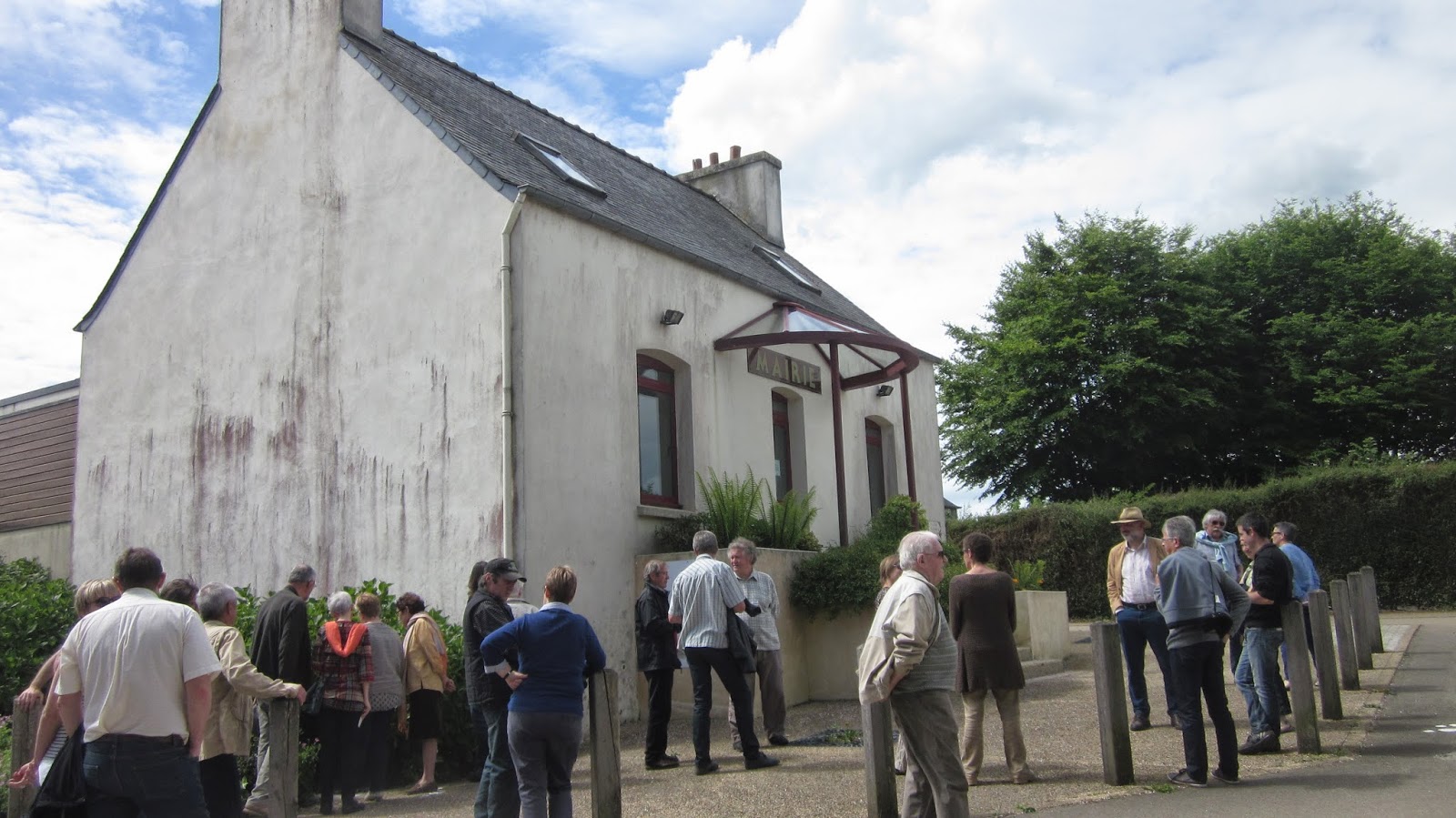 Today I went to the AGM of an association I've belonged to for many years. Au fil du Queffleuth et de la Penzé may not be the catchiest of titles for an organization, but the two names of rivers reflect the geographical and environmental parameters of a dynamique group which has laboured long and hard to preserve and present important local heritage. A recent exhibition concentrated on the manufacture of paper in the Queffleuth valley, an industry with connections to the linen trade with England and the pilhouarien (rag-and-bone men) of the Monts d'Arrée, the latter a subject I've studied a lot recently. As well as historical research, field work and nature study, AFQP has many educational projects, develops local themed walking circuits and offers guided visits for tourists and locals.
Associations are the prime example of that social inclusivity and cohesion that has traditionally given such strength to French society, and there are more in Brittany than anywhere else. Collective values and aims are supported here by many thousands of volunteers who give their time, expertise and experience to honour their local communities in all the many aspects of history, culture, sport and recreational activities. Much of any village social life is bound up with the activities and celebrations of such groups. I belong to a few, but AFQP with its good-humoured sense of solidarity and initiative is exceptional.
Today following the AGM in the village hall of Cloitre St-Thegonnec (whose annual book fair I faithfully attend) and discussion of various changes to the statues of the association, we processed around the streets for the inauguration of a new circuit highlighting the importance and uses of water in local history and legend. Individuals led songs as we walked, the well-known refrains eagerly rendered by about half the group, and a story was told at the last stop before adjourning to the village hall for drinks and food.
And here's the catch, the only possible thing to hold against associations - before anyone is allowed so much as a drop of liquid or a single crisp, there will invariably be at least five speeches.....
Posted by WM at 7:35 pm No comments: 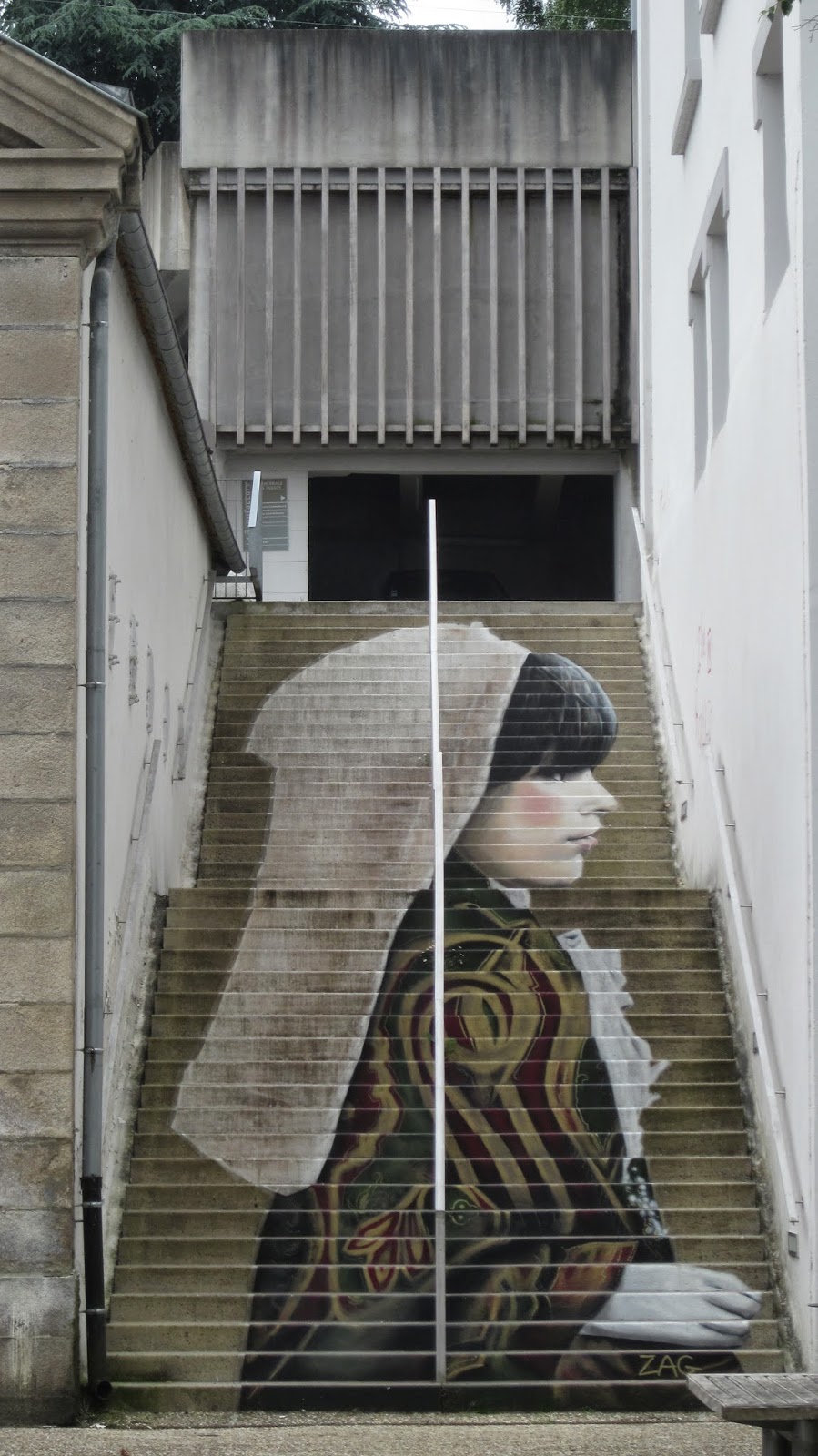 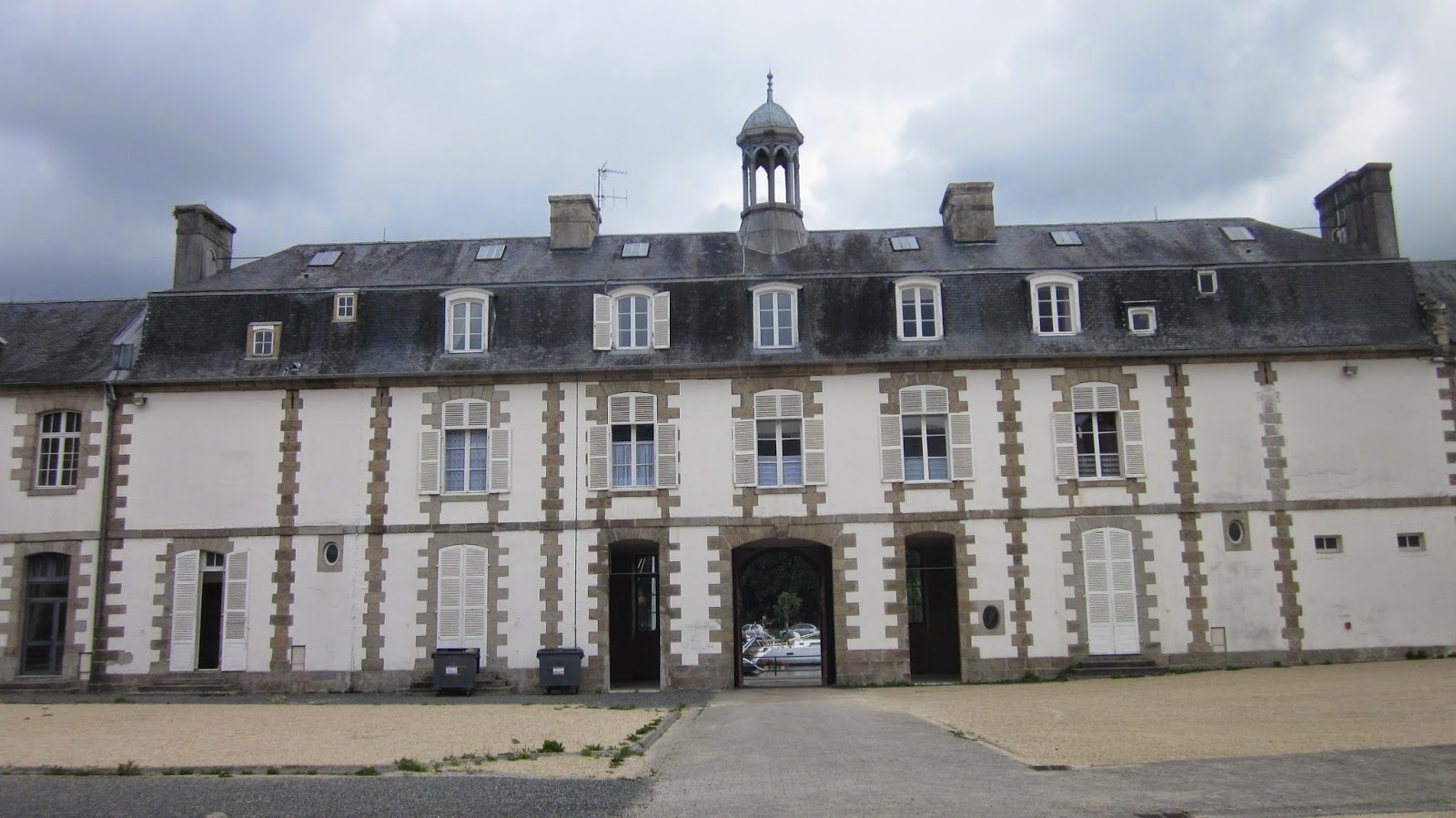 In Morlaix yesterday for various things and dropped into Skol Vreizh, publishers of books in Breton, for a look at the very moving exhibition of poetry by Naig Rozmor, who used her creativity as a defence against dementia. 'There have been times of sunshine in my life because I learned how to chase away the rain.'
Skol Vreizh have their offices in the former tobacco factory, affectionately known as 'La Manu,' which was built in 1736 after the growing tobacco industry - a royal monopoly - outgrew its earliest manifestation in the nearby Manoir de Penanru. La Manufacture des tabacs was an important employer in the town with up to 1000 local workers, who benefited from enlightened provisions such as a creche, sick pay and pensions, as well as literacy classes. The site continued to function until 2004 and remains a striking example of industrial architecture, although sporting a sadly neglected air today despite housing many offices and artisanal workshops. Does Morlaix recognise and understand the growing trend towards industrial heritage tourism? It would have been a great location for a Morlaix museum, something scandously lacking a proper venue for many years. What other town with such a history fails to present a coherent image of itself to visitors?
Posted by WM at 9:41 am No comments: