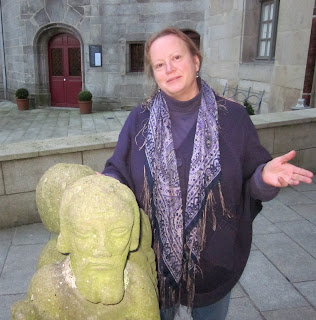 My newly revamped personal website is now up at http://www.wendymewes.com/ This is in addition to my business site http://www.brittanyheritageservices.com/ and http://www.brittanywalks.com/
And - what joy - you can now follow me on Twitter - see @brittanyexpert.
Happy 2011 one and all.
Posted by WM at 8:17 pm 3 comments:

To all those who ask why I like living in Brittany 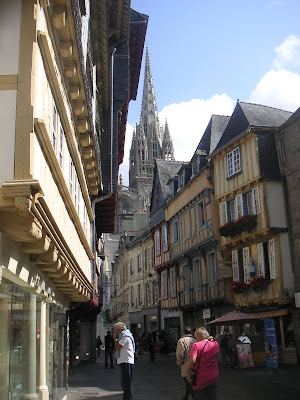 On December 23rd I went shopping in Quimper, capital of Finistere. I came off the motorway (very little traffic), drove straight into the city centre, parked in a half-empty multi-storey car-park by the river, and walked through the precinct of the beautiful Gothic cathedral to a multitude of interesting shops in stunning medieval buildings. No-one has better presented shops than the French and Brittany is no exception. But here the lack of frenzied buying and spending means you can actually browse at leisure. The streets are quiet, the only 'crowd' is a cluster of spectators for the ice-rink erected in the the cathedral square. The indoor market with its extensive food stalls is busy, but in a laid-back kind of way: no-one hurries to serve or be served. There is plenty of time and plenty of room. I stroll back to the car with my purchases - beautifully gift-wrapped at no charge in each shop - after a coffee in my favourite Café des Arts on the quay. In three minutes I'm through the one-way system and on the motorway again, relaxed and happy after an enjoyable morning.
London it isn't. Quality of life, it is.
Posted by WM at 7:00 pm No comments:

Email ThisBlogThis!Share to TwitterShare to FacebookShare to Pinterest
Labels: brittany

Valley of the Saints 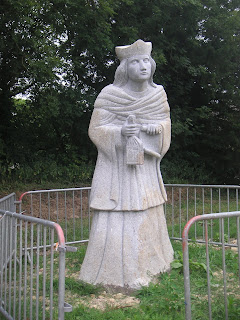 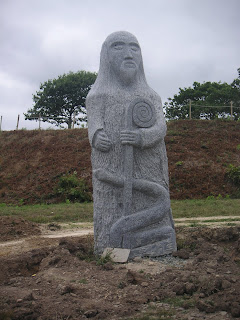 The Valley of the Saints project is to place up to 1000 statues of Breton saints, carved by contemporary sculptors, in a rural location of Cotes d'Armor. The more I thought about this, the more bizarre an idea it seemed, and after finally managing a visit last month, I still came away wondering what on earth it's all about. The concept may not immediately scream 'theme park', but in essence that's what it seems to be. How sticking a bunch of stylised lumps of granite all over a beautiful natural landscape contributes to Breton heritage is hard to envisage. Is it even art? Where is the authenticity of experience that is the essence of cultural tradition?
Work is very much in progress, with only about half-a-dozen statues in place, and a workshop area for honing further examples. I was told I couldn't go up to the site (the title Valley of the Saints had not prepared me for their current location on the top of a hill) because tractors were working, putting a statue in place. When I pointed out that the world and his wife and all his dogs were processing ahead of me up the track, I got a resigned shrug. It's clearly difficult to keep control over the instincts of man even in this place of holy figures.
Except it isn't, of course, a holy place and never will have the atmosphere and context that understanding of the particularities of Breton saints requires. The placing seems random and the selection includes historical figures like St Yves and mythical founders. The language of faith that is religious iconography should help in identification as they are not (yet) all named - only if you happen to know all those symbols in the first place.
What sort of literature will be produced to explain a mass demonstration of religious figures from 15 centuries, originating from different countries and holding distinctively different places in the complex tapestry of Breton religious development? How will visitors be able to distinguish between history and legend? Will the final presentation rate story-telling above significance? Will this become a substitute for visiting Brittany's unparalleled variety and richesse of churches, chapels and cathedrals? Like a mini Tro Breizh pilgrimage around the tomb of a 20th century bishop in Quimper cathedral, instead of the 600km walk of the real thing?
It will presumably answer the basic question who, but what about where and why and how? How can context be created for this glum parade? In the end this could be dumbing down on a colossal scale. I sincerely hope it will develop into something more. I'm sure the coach parties will roll in regardless.
Posted by WM at 12:08 pm 4 comments: 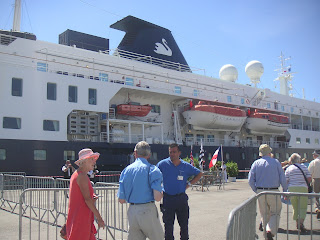 Yesterday I did my first stint as a guide for cruiseship passengers - in this case meeting the Swan Hellenic ship Minerva at Brest and going by coach to Quimper for a city tour. Time was fairly short but it was a real pleasure to meet so many nice people who were much interested in the history and culture of Brittany. That's the kind of working day that makes you think it's all worth while.
Also good to meet up with more French guides and realise once again that I am not alone in failing to bend the deaf ears of tourist organisations concerning worthwhile projects for a positive future of tourism in Brittany. Trouble is, they're the ones who get all the money.
Posted by WM at 1:39 pm No comments:

Now that we only have decent (in all senses) teams left in the World Cup, should anyone spare a thought for the sordid antics of our French representatives? Today Maverick Malouda shoots his mouth off - considerably better than he does at goal - and Thuram (rightly) calls for Evra to be banned from the national team. The government huffs and postures, ready for a monumental punch-up with FIFA (another bunch of *******) - but does no-one see the obvious parallel between sport and society? Four years ago France had a great team. Now let's see, what has changed so radically in France in the last four years? Duh......
Posted by WM at 10:21 am No comments:

Email ThisBlogThis!Share to TwitterShare to FacebookShare to Pinterest
Labels: an 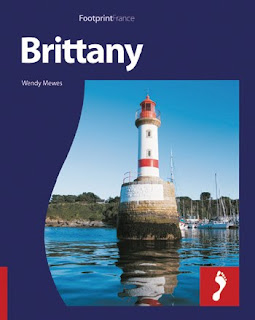 My Footprint guide to Brittany is finally out. I've got a connected article in the Independent on June 19th.
Posted by WM at 9:48 am No comments: 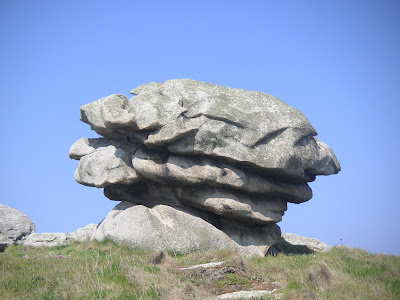 Just back from taking a small group on a coastal walking holiday, enjoying the fabulous north Finistere coast. This was a welcome break in the midst of an intensive period of work, culminating in the amusing highlight of being among the Parc Armorique competition winners with my legend Yann ar Yeun and the Grey Lord, (well translated from my original by Yves Marhic), about the disappearance of the nuclear power station in the Monts d'Arrée. There's to be a press conference next week and my story will be performed at an event on Sunday in the lakeside setting of the power station, when prizes will be awarded. The odd thing is that no-one has mentioned what the prizes are.
My Footprint guide to Brittany is now out - I received my copies today. The article I've written related to the book will appear in the Independent newspaper on June 19th.
I've had some interesting translation tasks lately. The new exhibition at the Abbaye de Daoulas is on Aboriginal and Inuit art - marginalised autochtone peoples being close to Breton hearts - and I was asked to do the English version notes. There has also been a project at the Abbaye du Relec for their new exhibition, with interviews of locals and French in-comers to be available in audio form - and also in English. This has involved transcribing French interview tapes, and creatively translating an English version that sounds good. The second recording session is on Monday. I do love radio-type work and look forward to recording more episodes of my History of Brittany later this month.
Posted by WM at 12:32 pm No comments: 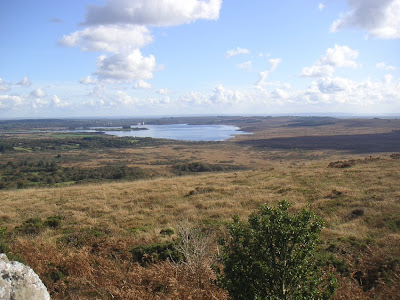 Interesting idea - a writing competition to create a legend explaining the dismantling of France's first nuclear power station (in the distance in photo) which lies in the heart of my beloved Monts d'Arrée, now a regional park. This is an area of wild, rugged landscape oozing legend and mystery from every pore of its vast peat-bog, and containg the entrance to the celtic underworld in the Yeun Ellez. The nuclear plant has been out of action for a generation, undergoing the long, slow process of dismantlement. I am working on my entry for this challenge, which must include the creation of mythological characters and relate to the existing fabric of legend and tradition. This is truly a task for the elementary spirits to show their stuff.
Posted by WM at 11:23 am No comments:

Lights in the darkness

By chance two separate people, one man and one woman, have spoken to me this week with warm affection and enthusiasm for my two novels, Moon Garden and The Five of Cups. What a pleasure it is to realise what a hold the characters and situations have taken on individual imaginations. In fact over the years I've had numerous messages from all over the world about the strong impact on readers. What is also remarkable is that both novels, unmarketed and out of the mainstream genres, have made a profit, although the poor author sees almost nothing as most are online sales (with sellers taking up to 60% which leaves little after the costs of production, publishing and distribution are taken into account). I'd really like to take a year to write another now, but without potential earnings it's impossible. Still a great comfort in these dark working days to know that two little lights burn brightly out there in the world...
Posted by WM at 11:57 am 3 comments: 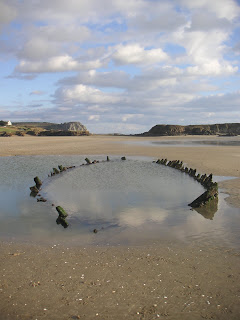 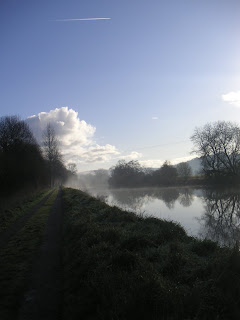 This is not such a bad time of year to be walking in Brittany - suitably clothed and shod, of course. The Nantes-Brest canal towpath near my new abode is a reliable track in winter, although flooding can force the odd detour. But sadly it's amazing how many cars (strictly forbidden) are out for a scenic drive alongside the canal in Finistere.
Otherwise there are all those miles of converted railway tracks, tedious or alluring depending on the location. The disadvantage of both options is the paucity of long views, so I'm still more tempted by the coastal path (last Sunday was warmer and sunnier than August 2009) and inevitably the boggy paths of the Monts d'Arrée, now a little further away but close as ever to my heart.
Posted by WM at 2:35 pm 1 comment: