I'm enjoying a chance to get on with the new book - cultural history of Brittany - without distractions, apart from finishing the Huelgoat walking for the little guide coming out in April. Yesterday I was able to write all morning, get out over lunch-time on the high hills on a cold and grey day perfect for walking and thinking, and then read all afternoon. 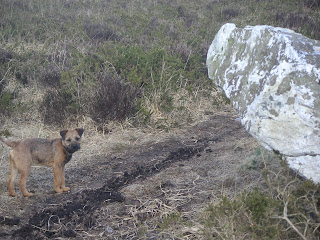 As I have already accumulated a veritable moutain of books (all in French, so inevitably a bit slower to get through) for research, that reading time is vital. Ended a very productive day listening to the Ramoneurs de Menhirs, my favourite Celtic punk band. Actually I don't know any others (yet) but I'm determined to get them in somewhere. Their wit and energy are inspiring, a sure antidote to the heavy literary mob who will also figure here and there in the book. And I like their music.
Posted by WM at 4:43 pm 2 comments:

The tallest menhir in France 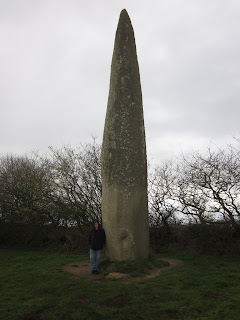 The Menhir de Kerloas - slightly taller than me ...
Posted by WM at 4:13 pm No comments: 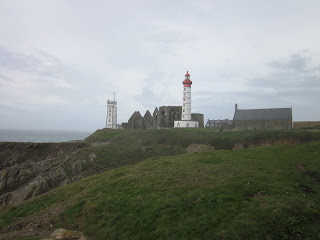 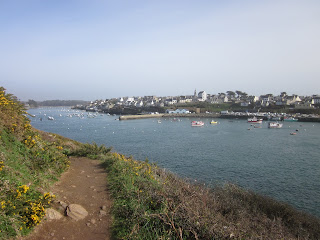 Had a great (too short) holiday in Le Conquet. Stayed in a very cheap but perfectly functional chalet in the holiday village run by the mairie. Two minute walk into centre and five minutes to coast path, so well placed for walking, eating and drinking. I rarely drink alcohol but it seemed the height of civilised behaviour to wander into town for an aperitif before supper. Just as well I revisited the Pointe de Corsen, westernmost point of France, where my new book opens - it has been heartily sanitised with a manicured path and pristine table of orientation. No more signpost to Moscow, Morocco and London. Maybe not such a great loss. Let's hope there are no plans for a tourist circus like at the Pointe de Raz.
Fabulous walk one day down the coast path to the Pointe St Mathieu with its ruined abbey and lighthouse on the cliff-top. Few better sights in Brittany than that, no matter that I've been there many times before. The fort has been transformed into a memorial to those lost at sea, the walls covered with photos of each individual. It's a disturbing and uncomfortable experience.
Partly also on the quest of Michel Le Nobletz, the 17th century missionary who did so much to galvanise Catholicism in western Brittany and invented the taolennou, sheep-skins or wood painted with biblical or allegorical scenes to revive notions of keeping to the straight and narrow in order to attain the ultimate reward in heaven. Some illustrations of these powerful documents in his little chapel above the port at Le Conquet and in the parish church where his tomb rests. 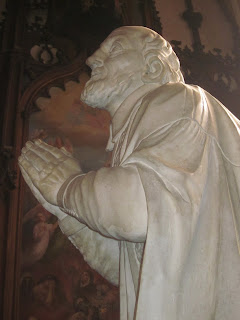 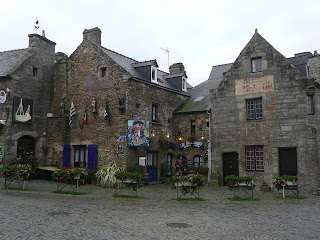 Seem to have had a great deal to do on many fronts lately. The book fair at Cloitre-St-Thegonnec on Sunday was not very lucrative but a pleasurable day out reconnecting with other writers. As I'm now a member of the Association  Ecrivains bretons I'm more in the swing of events and competitions, not that there's any time to do much creative writing these days. I've made a start on the cultural history of Brittany for Signal Books (www.signalbooks.co.uk).
The Saints Shore Way book is finished and going to press shortly, and I hope to the complete the Huelgoat booklet by the end of this month, although I've a bit of walking still to do to complete the path maps. Due a short break with a friend before that at Le Conquet (pictured) to have some quiet thinking time and breathe the sea air.
Posted by WM at 9:23 am No comments: