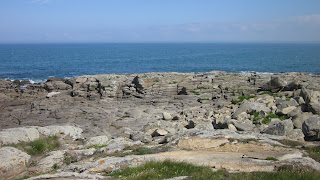 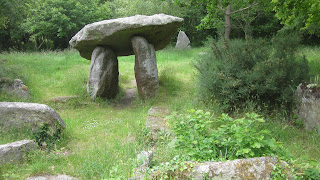 Too busy recently to do much writing of any useful sort, occupied by a few translation jobs and some guided tours, including a fabulous day last Monday with a lovely Welsh group from Fishguard (Loctudy twinning event). We mooched about the Monts d'Arrée on a coach and had a very good lunch at Le Poisson Blanc in Pont Coblant, all standing to sing the Welsh national anthem between courses, accompanied by a charming Breton in traditional hat.
Since then I've been in Pays Bigouden researching for the new Finistere walking book, and enjoying some spectcular coastal scenery at Penmarc'h, as well as the many megalithic remains of the area. I stayed in one of my all-time favourite B&Bs at Le Guilvinec (www.cap-ouest.com) where Martine made Breton far for breakfast and I discovered to my shame that the only word of Italian I could manage for my fellow-guests from Sienna was ciao. Similarly, there were people of Polish extraction in the restaurant talking a little in Polish, and I hardly recognised a word. Whatever happened to my language skills? Surely they existed? I spent months in Poland alone, without speaking English, so some meaningful exchanges must have taken place. These days I often forget English words and talk drivel in French. But at least, I'm pretty damn fluent in Dog.

Elez - my life in a river

I'm writing about the Elez for the autumn exhibition on Breton landscape. It's made me think a lot about the comfort and inspiration of a river, something that emerges as far more significant to me than the rhythms of the sea. It's to do with one directional flow, an infinite variation of pace and the coherent trace from source to mouth or confluence.
The Elez is intensely interesting for the variety in its short length. Most famous is the Yeun Elez, a vast marshy bowl said to contain the entrance to the Celtic underworld, and the setting of many a Breton legend. Here near the source, the river immediately settles into stagnation and the lazy squelch of bog, its force constrained in a peaty reservoir. The 1930s Lac St-Michel flooded the area to hold a mass of water for producing hydro-electricity, with a barrage at Nestavel, and later serve the 1960s nucelar power station on the lakeside.
Once resolved of such serious responsibility, the Elez can breathe freely and move at a rapid pace, becoming positively light-hearted at the magical Chaos of Mardoul, where it lilts among the granite boulders with playful insistence. Held up again for another functional duty with a lake and barrage at St Herbot, it somehow manages both to fulfil the demands of the artificial channel to the electricity plant and yet retain enough energy to power down spectacular tiered cascades over massive stones near St Herbot.
After the drama, a calm rural meander across eastern Finistère, passing (and occasionally threatening) a friend's mill-house between Collorec and Plouyé, before reaching the Aulne near Penity St-Laurent.
My affinity with this river is, of course, in great part a matter of scale and accessibility. I doubt I'd feel so strongly for the Limpopo. But while the sea remains too vast to grasp, too over-whelming, predictable and unpredictable, diurnal and eternal, the Elez is simply a beautiful river with a beginning and an end to its story, easily analogous to a life's course with all the attendant rises and falls.
Posted by WM at 8:35 pm 1 comment:


Landscape is the result of human activity on nature. Every anomaly in landscape hints at narrative. The Blavet river's connnection between central Brittany, long devoid of easy communications and commercial development, and the south coast ports of Hennebont and, from the 17th century, Lorient, gave it a vital role as a means of passage and transport. It was later to be transformed by canalisation into an essential part of the Breton waterway system in the early 19th century, forming a section of the Nantes-Brest route north and west of Pontivy, and taking 28 locks to the south direct to Hennebont, sixty kilometres away.
The next stage of the Blavet's story came a hundred years later, as scientific advance created surging demand for electricity. It was decided to flood a twelve kilometre stretch of the valley between Locks 119 and 137 to create a reservoir and barrage to feed the new hydro-electic station, a progress outlined in the little Musée de l'Electricité at nearby St Aignan. Four hundred hectacres of woodland, as well as many locks and houses, were engulfed by the project. The resulting lake was to become a focus of tourism and watersports, an economic spin-off for the locality, a new phase of the river's life.
At rare intervals the lake has been drained for inspection and repair of the barrage. 2015 may be the last time, as robotic machines should be up to the job in the future. The empty lake on show this summer is an extraordinary spectacle by any criteria, its walls and bed stripped naked for human assessment. Skeletons of trees submerged for eighty-five years still stand upright from the mud. Locks with their uselss weirs and chutes still exist intact, accompanied by the ruins of their workers' houses, walls withstanding the pressure of the waters where roofs have disappeared. Layers of narrative are fully exposed.
But there is movement in the bottom of this gigantic emptiness. The Blavet continues to flow. Nature continues to hold its place under the weight of all that landscape.
Posted by WM at 11:08 am No comments: