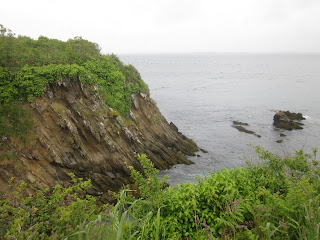 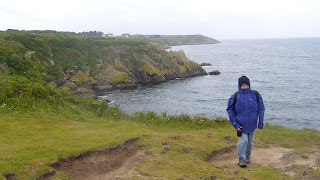 Trip to the Ile de Groix in very bad weather yesterday. Whilst walking for hours in sodden clothes is not my favourite occupation, it turned into a great day thanks to my companion, a geologist - an essential on this island once tortured by tectonic plate movements that have left the most spectacularly dense folding and the coloured stones for which Groix is famous. Garnet dust turns many sands red, and tiny garnets stud the deep blue/green glaucophane. 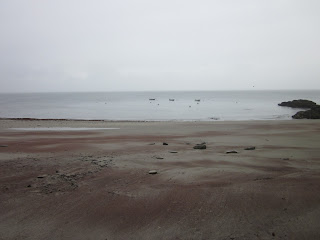 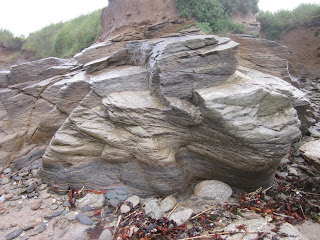 My other goal was to visit the haunts of one of my favourite poets, Yann-Ber Calloc'h, a tragic loss to Breton literature at the age of 28 in WWI. To hear his moving lines about his beloved native island read aloud in Breton beside his memorial on the cliff-top was an experience that saturation could not spoil. 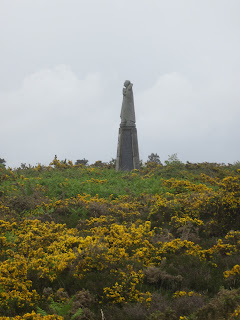 We left in a brief of spell sunshine, past the very unusual convex beach of Grand Sables, Groix gleaming greenly in our wake.
Posted by WM at 1:46 pm 2 comments: 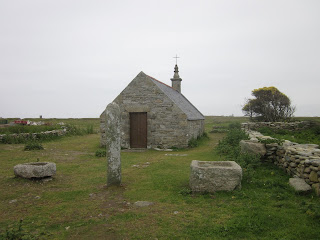 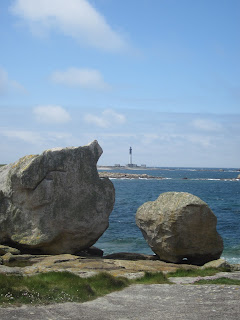 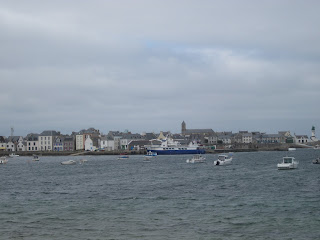 On the Ile de Sein today for my chapter on Breton islands. It's eight years since I was last here but not surprisingly it seemed pretty much the same. Strange experience, as nowhere is more than 8m high, and the surrounding seas, even on a quiet day like today, were rough.
Not sure yet what theme I'll rest on, but women and/or death are sure to figure. Admired Mathurin Meheut's drawings of women at work in the museum, which also has an extensive section on the war. I think enough has probably been written already on Sein's contribution there, de Gaulle's admiration and the illustrious honour of the Ordre de la Liberation.
High recommendation for the restaurant at the Hotel Armen, where I had the best cod fillet in seaweed sauce (one of my favourite dishes) ever, plus good homemade bread and home smoked fish with salad to start. 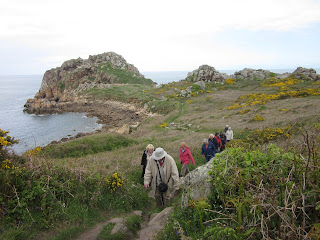 I was pleased to do a guided tour for the association AIKB today, highlighting some of the great sights covered in my new Saints Shore Way book. First we visited the remarkable crypt in the church of St Melar at Lanmeur, followed by a quick look at the Romanesque church of Kernitron.
Onward to the coast at the Pointe de Primel (pictured above - with those of the group who wanted a bit of exercise after lunch) where we had a picnic and some walked out to the gouffre or chasm between the butte and the culminating rocky pinnacle. This was an Iron Age éperon barré, or fortified peninsula, where the natural landscape was enhanced by artifical ramparts to form an impressive defensive position, occupied over later centuries by the Vikings, the English, the Spanish (Wars of Religion) and the Germans in WWII. Finally to the neolithic cairn at Barnenez, a site I cannot visit often enough, for a glimpse into the life, death and values of people in Brittany around 4700BC. This monument was called "the Parthenon of the neolothic" by culture minister André Malraux in the 1950s when it was classified as a matter of urgency to stop a predatory developer who had begin dismantling several of the eleven passage graves under the cairn. 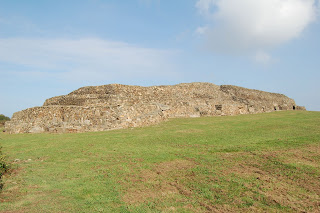 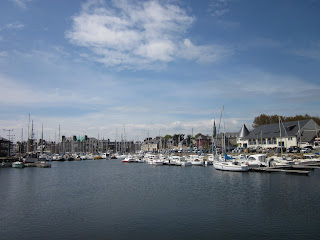 My latest research trip was a few days in Paimpol as I'm writing something about 19th century Breton cod-fishing in Iceland. This incredibly arduous, grim and frequently fatal endeavour was elevated into a kind of super-heroism by popular culture of the time, notably the novel Pecheur d'Islande (1886) by Pierre Loti and the song summarising its whole story in six verses by composer Theodore Botrel a few years later. The latter has a simple and hence infuriatingly catchy lilt that keeps it going round and round in my head ...
J'aime Paimpol et sa falaise
Son eglise et son grand Pardon
J'aime surtout la Paimpolaise
Qui m'attend au pays breton

There are no cliffs around Paimpol, but that rhyme's an irresistible gift ... 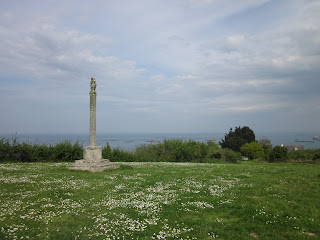 This is what Loti dubbed the Widows' Cross, sighting point for the return or non-return of the ships. The excellent Musée de la Mer tells the whole painful story with a variety of documents and artefacts. Well worth a visit, and nearby is the unmissable Abbaye de Beauport. I've been numerous times and it was not on the agenda, but it's just too good to pass by, especially on a sunny May morning... 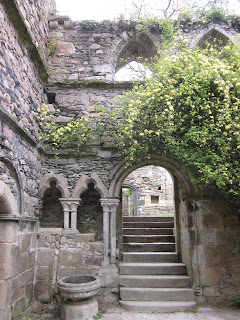