Revisited my favourite coastal route in Brittany this week. The stretch between Camaret and the Cap de la Chèvre has everything a walker could possibly want - and then some. Natural features like the so-called Chateau de Dinan, the extraordinary raised beach at Porz Koubou and other geological wonders like pillow-lavas, historical sites such as the Iron Age éperon barré at Lostmarc'h, a memorable sight below you after breasting a high ridge, looking down on the lines of defensive ditches and ramparts that once protected a small community from their enemies.
Other works of defence are remnants of the Mur d'Atlantique, German protection of this wild west coast, where only the most foolhardy would ever have considered any sort of landing. Surfers haunt the vast beaches here but it is too dangerous for swimming.
The coastal path streaks through moorland - gorse, heather and low spiky thorn - down to beaches, up to yet more cliffs, the gradient sometimes decidedly steep, the proximity to the edge precarious. It's all the very best of coastal walking, seeing the paths rippling ahead across the contours, looking back on headlands conquered one by one. At the end is the reward of the Cap de la Chèvre itself, with a WII memorial to the naval air arm, granite plane-wing rising against the blue sky - for I felt not a drop of rain that day, despite black clouds menacing from time to time. 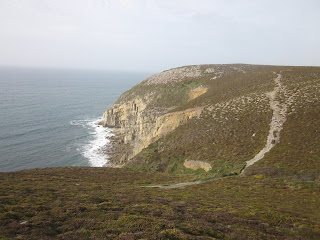 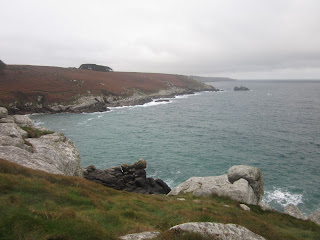 I'm concentrating now on coastal walking for the new book. This section will include some linear suggestions for Finistère's sensational littoral, so a route of about 10km becomes a day long out and back excursion (or a lift, taxi or even bus can make it a one way walk if so desired). The point is to highlight the best bits so walkers who only have a limited time can be sure of getting a memorable journey - and best bits usually means avoiding the obvious (i.e. places easily reached by car, like the Pointe du Raz).
So today I was on Cap Sizun, revisiting some favourite sections of the coastal path and enjoying the mild sea air, softened by occasional misty rain drifting across the high cliffs, as below at Kastell Koz. 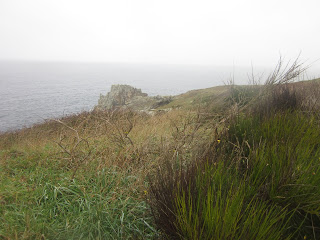 A good day's work, even if my knees would have preferred to stay at home and watch TV. 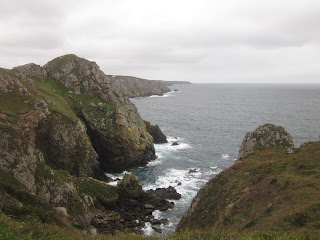 Village in a sacred space 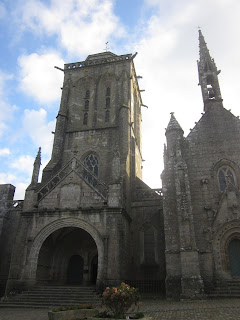 I had a wonderful walk in Locronan in beautiful sunshine on Thursday. The route concentrated on the wooded countryside around this unusual village, which has a strange dual nature, the sense of artificiality spread unconvincingly over something profound. The name means the holy place of Ronan, the Breton saint of Irish origin who came to Brittany and like many others, faced opposition and antipathy. He moved around, settling finally in this sylvan paradise said to have been the location of a well-defined Celtic nemeton or ritual space, with specific points linked to movements of the heavens.
Each day he walked the boundary of this area, an action commemorated today in the annual Tromenie walk (extended to the full 12km every six years). The chapel of Penity attached to his imposing church in the village centre has the saint's tomb. Locronan sits between the Bois du Duc and the Bois du Nevet, remnants of ancient forest. Anyone following the walk (to feature in my new book) will have the sense of the numinous landscape that is the source of these legends and religious affiliations.
But the other more obvious face of the village, which has brought many film-crews (including Roman Polanski who filmed some scenes for Tess of the d'Urbervilles here) and attracts hordes of tourists throughout the year, is made up of handsome 17-18th century façades around the centre square before the church. Remarkably unspoilt, these reflect the wealth derived from sail-cloth making in the heyday of the Breton cloth trade. 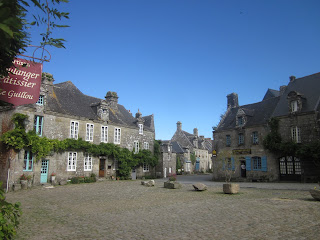 Today many artists and craftsmen have their workshops here and there are plenty of bars and restaurants, making it doubly desirable for a day's outing. Not always to be relied on though: a couple of years ago I decided to come here on my birthday just before Christmas, to buy a few presents, have lunch and a walk, as the weather was unseasonably sunny and mild. Everything was closed, even the bakery, so with no possibility of food, I paid my respects to St Ronan and drove home for a cheese sandwich.
Posted by WM at 1:55 pm No comments: 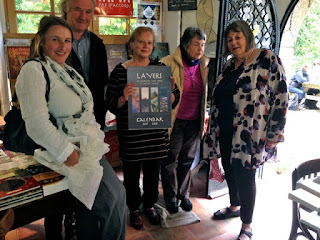 Delighted to be presented by the artists (organized by my great friend Liz) with a calendar containing wonderful images from the exhibition. The opening was a very happy occasion for us all with lots of appreciation from the public (and sales).
Posted by WM at 9:48 am No comments:

My exhibition on Breton landscape at L'Autre Rive in the forest of Huelgoat opens today at 16.30 (rather than 17.30 as advertised initially because of important politcal meeting in the evening at same venue). Booklets of the texts I'm displaying with some other collected pieces of my recent landscape writing are on sale. I have to say the paintings look magnificent now that the exhibition is hung and ready to go - my friend and fellow-exhibitor Liz Ridgway worked with me and Marc from L'Autre Rive all yesterday evening to get things right. I owe her many thanks for many things and also here thank the other artists who have produced such fine work. All welcome to the opening this afternoon.
Posted by WM at 9:15 am No comments: