Yves Helory (c1250-1303) was canonized in 1347 after due process in which 225 witnesses testified to miracles achieved in his name. He is the male patron saint of Brittany, his historicity in marked contrast to his female counterpart Ste Anne, a figure from the Apocrypha. No visitor to Brittany's chapels can have failed to observe the iconic image of St Yves, a figure in the garb of an ecclesiatical judge, between a rich man and a poor man, his head usually inclined towards the latter. He had the reputation of favouring the underdog in legal disputes and siding with have-nots, which makes his role as patron saint of lawyers who come from all over the world to his pardon on May 19th each year in Tréguier, a curious one.
St Yves passionately devoted his life to the sick and those living in abject poverty. He gave away all his own possessions and opened the family manor house at Kermartin in Minihy-Tréguier to unfortunates. But it is his physical presence in the landscape of the Trégor that is most memorable. All his formal education in law and theology at Paris and Orleans, his aptitude in French and Latin, did nothing to separate the man from his home territory. As well as his duties at the cathedral of St Tugdual in Tréguier, he was rector of Trédrez and Louannec. Sometimes he preached in seven different churches on a Sunday, walking many miles between them. He was said to take little rest or food on these excursions, leaving in the early morning and returning home exhausted late at night. Certain rocks along the routes he walked are dubbed the bed or pillow of St Yves, emphasising his rejection of comfort and luxury whilst so many suffered hardships of penury.
The indefatigable walking was part of his method and his commitment to God. It was a way of interacting with the peasants in the fields or workers in the forests and travellers on the road (as two women attested after his death). He always stopped to speak and make contact with those he passed, seizing these opportunities to spread the word of God. By all accounts his actual sermons - no texts survive - were highly emotional, tears figuring alongside examples from the lives of saints.
Before the violent mayhem of the Wars of Succession that ravaged the greater part of Brittany from the mid 14th century, it was apparently possible to walk without fear along the paths of the Trégor. From Trédrez in the west to the area of Goelo and the Abbaye de Beauport in the east, many legends of association in the landscape have grown up around the journeys of St Yves and the powerful image of this slight figure walking his way into sainthood.
To be continued...
Posted by WM at 11:56 am No comments: 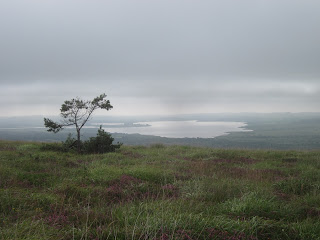 Took my first proper walk today, leaving early this morning to hike up the eastern approach to Tuchenn Gador before the sun drove away a light grey mist. The path mounts through a little cluster of conifers, several bare skeletons the destructive result of serving as roosts for the million starlings that perform their evening dances in a dark cloud over the hills here each autumn. 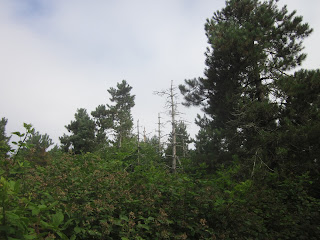 Once out onto the open heath, a wind invariably slices across from the north-west, rippling the molinia, or moor grass. A rough track rises steadily towards the first rock-outcrop, where I scramble up remarkably easily, as if my legs are acting from memory rather than my current weakness. On the plateau the views are superb: the reservoir gleaming silver, heather-purpled ridges, Mont St Michel de Brasparts with its iconic chapel on the summit. 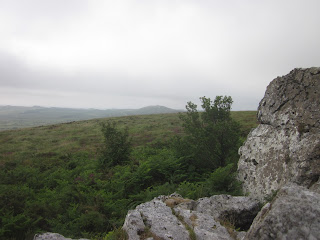 A deep happiness fills my heart as I approach the rocks themselves, riven by shards of quartz that glisten as the first sun pushes out from the clouds. The formation is natural, an eroded carcase of this once great mountain chain. It resembles a craggy throne, hence the name 'Mound of the chair', although 18th century French map-makers made head nor tail of the Breton tuchenn and settled for Toussaines instead.......... 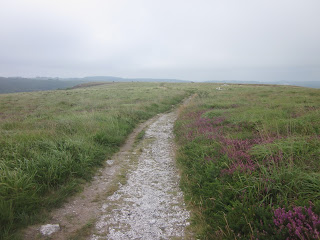 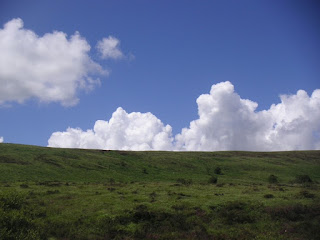 Home at last after weeks of recuperation in beautiful Roscoff, helped by wonderful people at the Maison St Luc facility. Now it is time to stop being an ill person and make a new start. I feel ambivalent about writing projects but it is probably too soon to take big decisions about significant changes. One thing I've been thinking about is how, for some of us, there is a remarkable sense of serenity to be had from wildness, whether of inner or outer landscape. What troubles others with a lack of definition or human control, calms me beyond anything else. The sight of the unusually green summer coating of the Monts d'Arrée softening their sharp edges smoothes my rumpled spirit. I know I can feel whole again in the embrace of those teeming spaces.
Posted by WM at 11:18 am 2 comments: