A devil of a route

My month in eastern is nearly at an end and the first stage of research for my new book in these parts complete. One of the routes I'll be writing about follows an exceptional course through religious and cosmological affinities from the Neolithic to current times. Here are some hints at the potential of the material I'm pursuing.
From his perch on Mont Dol the Devil saw St Samson, an incomer from Wales and one of the seven founding saints of Brittany, busily constructing his cathedral at Dol-de-Bretagne two miles away. Furiously he tore up a huge stone and lobbed it at the offending structure, smashing one of the two towers. But the granite projectile bounced off its target and came to rest upright 3km away. It is better known today as the Menhir du Champ Dolent, a standing-stone of just over 9m in height, raised somewhere around 2500BC. It is solitary now, but actually stands in a straight line with two other large menhirs between the remarkable passage grave at Tressé in the forest of Mesnil and Mont St Michel, where once there were also neolithic monuments.
Below the open plateau dominated by this enormous stone is the rural and the fontaine of St Samson in an little enclave of verdure. He arrived in this spot from via the river Guyoult, and after curing a local nobleman's daughter through exorcism, was given land here in an idyllic location for a first monastery. This spring might also have a significant connection with the Arthurian legend, but I digress...
Continuing along the river valley, now managed in a series of lakes and ponds as a nature reserve and flood deterrent system, I am soon in the centre of Dol-de-Bretagne, a town of singular historical significance and resplendent architectural remains. The oldest house in (12th century) still stands in the main street, surrounded by colourful half-timbered buildings from later centuries. This Grande rue des Stuarts is a reminder that the Scottish dynasty started here, as Walter Fitzalan, from the local noble family, was appointed 'steward' in Scotland for King David 1st, a position that became hereditary. Although the chateau of Dol is long gone, a powerful stretch of ramparts looms over the flat marshland - somewhat more under cultivation today but still unmistakably a marais - that surrounds the city.
The Gothic cathedral, rebuilt after destruction by King John in 1203, holds many secrets and oddities. Apart from the single tower, it has the only double well known on such a site: one shaft inside the cathedral, one just outside, the two joined by a flooded underground gallery. A magnificent 13th century window dominates the interior, and the ornate tomb (1507) of bishop Thomas James features a representation of the Holy Grail which is lit by a ray of sun on the summer solstice. It is not impossible that the Grail itself may once have lodged in Dol, but that's another story.
Leaving the town down steps from the ramparts, a little lane leads out north across the marsh, under the expressway and later the railway line, meandering through fields of maize and drainage channels lined by soft reeds and wetland flowers, all the way to Mont Dol, a table-shaped hill curiously rising ahead out of the ubiquitous flatness. 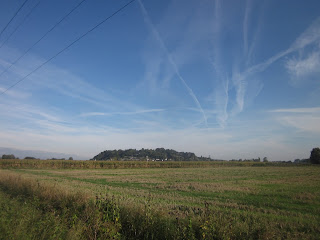 One of the seven sacred hills of , it has been occupied and exploited since the earliest times. Mammoths, rhinoceros and aurochs roamed here, pursued by men living in caves on the steep sides. A neolithic settlement once stood on the summit, not far from a later Roman temple to Mithras, complete with two special tables for bull sacrifice. There is also a little chapel to St Michel, for here he fought with Devil and threw him down into a deep chasm in one legend, leaving only the trace of his demonic buttocks and claws on a famous rock. In another, he tricked his greatest adversary into accepting Mont Dol in exchange for Mont St Michel, making him believe it to have a gleaning palace of glass, which turned out to be ice... No wonder the Devil was so furious when he saw St Samson building that damn cathedral just across the way. 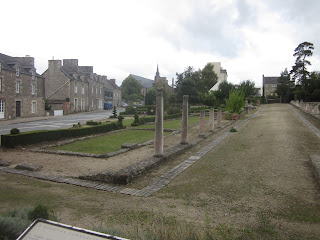 The dearth of large-scale Roman remains in makes for a patchy overview of this period of history on the Armorican peninsula and a limited impression of legacy. Corseul, however, offers both a wider sense of perspective and some fine individual details: the semblance of a street, the outline of a villa, a touching inscription, domestic finds. The town is referred to as Fanum Martis, the shrine of Mars, on the Tabula Peutingeriana (medieval version of an ancient map), although this may refer only to the related religious site nearby. The Roman foundation is from the time of Augustus, with significant Claudian growth and developments up to the 3rd century. 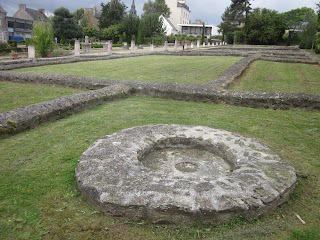 Corseul was the tribal capital of the Coriosolites, until dangerous times as the Empire broke up took them to Alet, near St Malo. The town was an opportunity for Gallic nobles to live the benefits of Roman rule, privately and commercially, as the area of Monterfil in the centre of the modern village shows. Here is preserved a stretch of , orientated east/west along the line of Roman roads entering and leaving the village. The lay-out, shaped to the sloping contour of the land, is edged by Tuscan colonnades and lined by the foundations of a basilica and shops on one side, with houses behind (including the hint of a hypocaust heating system), and a vast warehouse with a courtyard behind on the other. Originally most of the buildings would have been two-storeyed, as the helpful reconstruction drawings around the site indicate. Gutters line the street, with a large cistern for collecting rain water at the lower end. It is not hard to visual this thriving business centre in the early 1st century AD. 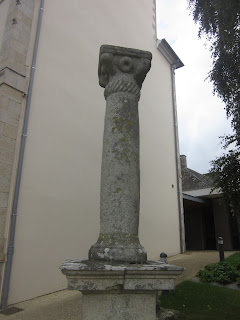 A smattering of column bases and half pillars are grouped together beside the mairie, including the so-called Jupiter column. Elsewhere in the village, a former school-house – standing on what was probably the ancient forum - holds a dedicated exhibition. This collection of finds contributes the fine brush-strokes to an image of life in the capital of the Coriosolites in the first three centuries AD. On the other side of the road, the villa of Clos Muton reveals its layout and evolution over time into a palaestra and bath-house.
Two inscriptions from the town record individuals, one a high-ranking religious official, the other revealing a more personal picture with a tombstone complete with faded Latin, now in the church. It was erected by the son (presumably a solider in the Roman army) of Silicia Namgidde, who followed him here – eximia pieta - from her home in . She died aged 65 years. 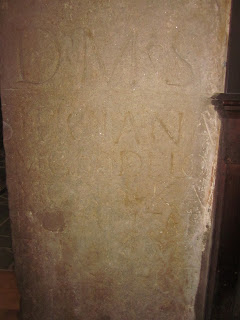 Once visible from the town was the sanctuary of the complex, on a hill-top 1.7km away. This was the religious ritual centre of the Coriosolites’ civitas. The lavish remains of the cella are impressive enough now, but once measured 22.5m in height, ensuring a dominant feature in a landscape criss-crossed by several Roman roads. The foundations of the main complex enclose an open internal sacred space of 5000²m surrounded by colonnades and all rooms needed for the paraphernalia of religious worship and festivities. A strong sense of ritual and processional activity still emerges from this elaborate sanctuary on its prominence. A footpath to the side of the cella leads directly towards the village of Corseul, visible in the distance after a hundred metres or so, and must have once been a straightish link, even if a more tortuous route is needed now to connect with the street remains of Monterfil. 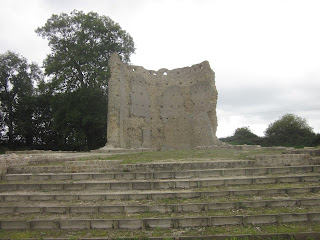