Worth its weight in gold

Léon, the northern area of Finistere is best known further afield for its ferry port at Roscoff, but no traveller heading south off the boat can have failed to notice the ubiquitous fields of artichokes, onions and cauliflowers. It is a prime growing area, part of what has long been called the Golden Belt of Brittany's agricultural harvests. Brittany Ferries itself was started in the 1970s to take the produce to Cornish markets. Breton artichokes were once flown on Concorde to the US.
The legend of Saint Goulven is at the heart of this idea of fecundity and its concomitant prosperity. His mother was about to give birth to him as soon as they arrived on the coast of Armorica, near where the bourg of Goulven is today. His father went on a desperate search for water, finally falling to his knees and praying for God's help. On returning to his wife, he found a newly born son and a newly flowing spring of freshwater. The land in Brittany provides. The elaborate Renaissance fontaine of St Goulven now marks the spot. Pilgrims later came for healing, particularly of fever. A stone sarcophagus in the wall by the statue is called the bed or tomb of the saint. Here sufferers immersed themselves and prayed for cures.

Although much later a bishop of Léon, Goulven was a quiet and serious young man, who soon dedicated himself to prayer and preaching. He lived apart from society with a single follower. One day he had the impulse to send his friend Maden to a neighbour asking for a gift. After a short reflection, the neighbour hefted a clod of earth into the fold of Maden's tunic and sent him back. Maden found his load heavier and heavier as he struggled to return. Goulven came out of his hut to meet him and discovered that the earth had turned into a lump of gold. So we learn that the riches of Léon lie in its soil, and that Goulven was worthy of a miracle and destined for sainthood.

I am very interested in sacred walking at the moment as recent posts indicate, although my new book is about different types of routes and not limited to religious themes.The Grande Tromenie takes place every six years at Locronan, with an annual shorter version. The name means journey (tro) around a monastic territory (minihi), and, according to tradition, the route follows the path of a sacred circuit undertaken regularly by Saint Ronan around what was already established by the Dark Ages as a Celtic nemeton, or outdoor temple. A trail linking rocks and megalithic remains, commonly called Druidic stones in the 19th century, may have been linked to fertility rites. This aspect has persisted in popular perception, and maybe conception, right up to the present day.
When Ronan established his settlement here (later Locronan, the sacred place of Ronan), it was after an initial bruising encounter with feisty Breton women on the coast of the Bay of Douarnenez, who resented him interfering in their nefarious wrecking activities by shining a great light on the shoreline. Arriving in the interior where the welcoming anonymity of the Bois de Nevet (once Nemet = nemeton) sheltered him, Ronan was soon drawn into the public spotlight again, incurring the unbounded hostility of a woman named Keben. She wanted to destroy the reputation and influence of the monk and accused him of murdering her daughter, but Ronan was able to prove Keben herself was the culprit. Later, after the saint's death, she insulted the funeral procession and struck off a horn of one of the oxen leading the funeral cart. This story is to explain the name of Plas ar Horn, beside the memorial chapel of 1912, one of the 12 stations of the Tromenie route, and an earlier ritual site.
The festival attracts many thousands of followers for the procession, which wends through the countryside over 12 kilometres, including paths on private land only open for this event - a good chance for new perspectives in all senses. This relationship with the landscape is my interest in this case. The way is cleared of foliage and long grass, and marked out with 12 stations, each representing an individual saint with a granite cross and a little hut containing a statue, brought in from chapels in the area to honour Ronan and be honoured by the faithful in their turn. 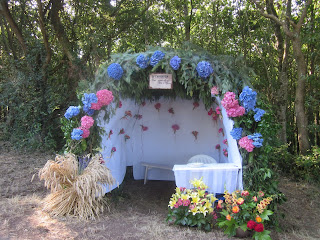 One notable feature is Gazeg vaen, a rock also known as the Chair of Ronan, where the saint is said to have sat and looked out over the waters of the bay (no longer visible from the spot). The stone is the survivor of  a megalithic group, and has been (for how long?) the focus of a fertility ritual for women, who lay full length or rubbed their belly against the surface to increase their chances of conceiving a child.
The grand procession is on Sunday 14th July, but the route remains open to walkers for one week after that date, and I'll be on it at a quieter time. (Walked on Tuesday 16th and some photos added above).
Posted by WM at 7:49 pm No comments: