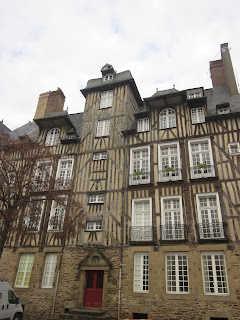 Rennes is a city I find more and more alluring with each visit. It's been two years since I last spent regular time there and my short stay in the metropolis last week was a real tonic, full of stimulation and heady intake of luscious architecture. I had forgotten how essentially rural I have become.
It's not possible to understand a city from a guidebook: knowledge of history and architecture or even the best places to eat and visit can only take you so far. Any urban development is about shape and fluidity, the relationship between horizontal and vertical, space and structure. Walking without purpose is a fine way to start, taking the good with the bad, observing without judging. I wandered from the centre up to the Prefecture a few kilometres away without a map, moving slowly along residential streets and increasingly busy arterial roads. This was new territory for me as in the past I would take the metro or a bus out to the university area, but I felt a sudden sharp pang of recognition outside a perfectly ordinary chemist shop. This was unsettling until I later remembered a week in an appartment near the hospital with a sick friend many years ago. That was where I went to get her medicines. Cities store up emotional coinage in this way over a long period of time, perhaps more so than the countryside because urban experiences are more transactional. 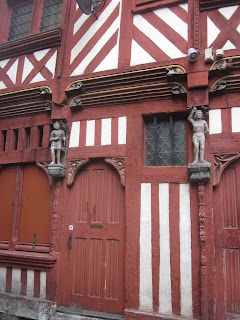 Other ways of exploring towns can be based on fundamental units: a river, a cathedral, a high point. Anything with function has influenced its environment, and observation can be a satisfying way of coming to know the underlying harmonies and compromises of consciously developed space. Of course, history helps. In Rennes the abrupt change from the cathedral district, medieval finery in the form of narrow streets of glorious half-timbered houses with colourful carved decorative detail, to grandiose neo-classical public buildings and noble residences is unmissable. It is on too large a scale to envisage deliberate clearance and the disaster of a great fire (actually in 1720) is not hard to deduce. 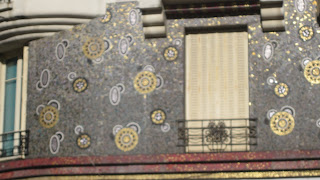 But there is also a powerful punch of 20th century magic and post-war vivacity in Brittany's capital. The vibrant mosaics of Isidore Odorico (1893-1945) adorn St Georges swimming pool and a stunning appartment block in Avenue Janvier amongst other locations. Circling the centre like signposts to the future are beautiful high-rises, the work of architect Georges Maillols who arrived in 1947 to help rejuvenate the city. I have never felt a stronger emotional pull from a building than Les Horizons. It was love at first sight a long time ago, but our relationship has endured and matured.
That's the thing about Rennes - it's a city to observe and feel, a place to make the heart beat faster. Never mind the guidebook. 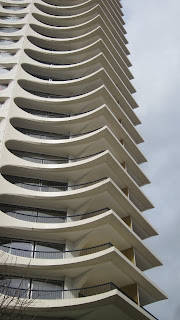