Very pleased to take a large group of AIKB members around the forest at Huelgoat today, considering basic questions of history and legend. We started with a Trembling Rock and ended near the spot where Victor Ségalen finished his life under the beech trees high above the Gouffre. A bit of Chaos and King Arthur came in between. I really enjoyed the afternoon and thank everyone for their company and good cheer.
Posted by WM at 6:24 pm No comments: 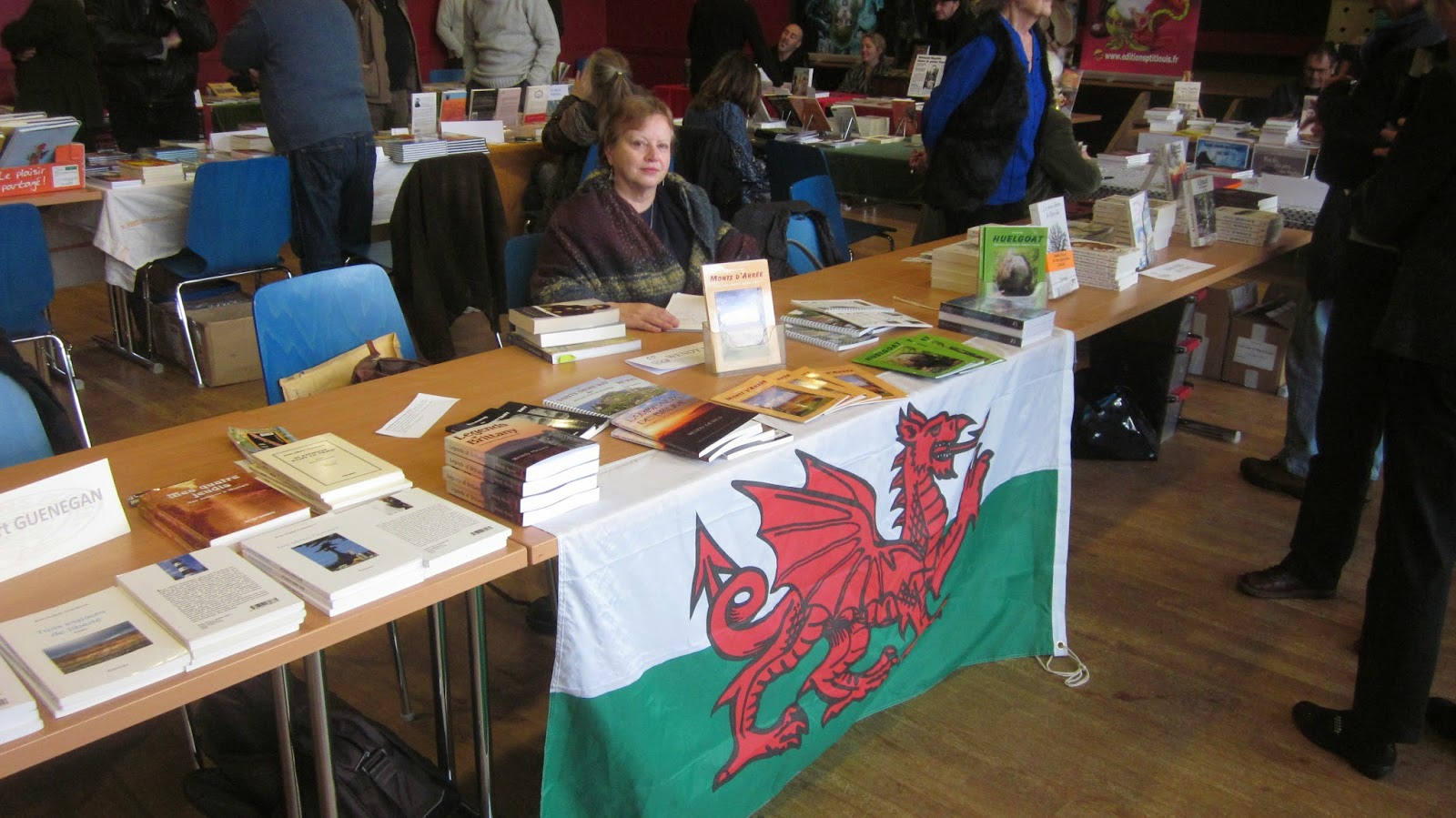 Spent the day at book fair at Le Cloitre St Thegonnec (a good old Welsh saint himself) and so missed seeing the match and Wales' great win over Scotland, but managed to fly the flag nevertheless. Writer Hervé Bellec told me that a group wants to ban the dragon from the Welsh flag as it represents the devil, but that can't be right as everyone knows the Devil is English. It was a good day, with lots of old friends - both writers like Catherine Chartier and Anne Guillou, and visitors - and some new ones, like professional magician and now thriller writer Alex Reeve (alexreeve.net).
Posted by WM at 8:02 pm No comments: 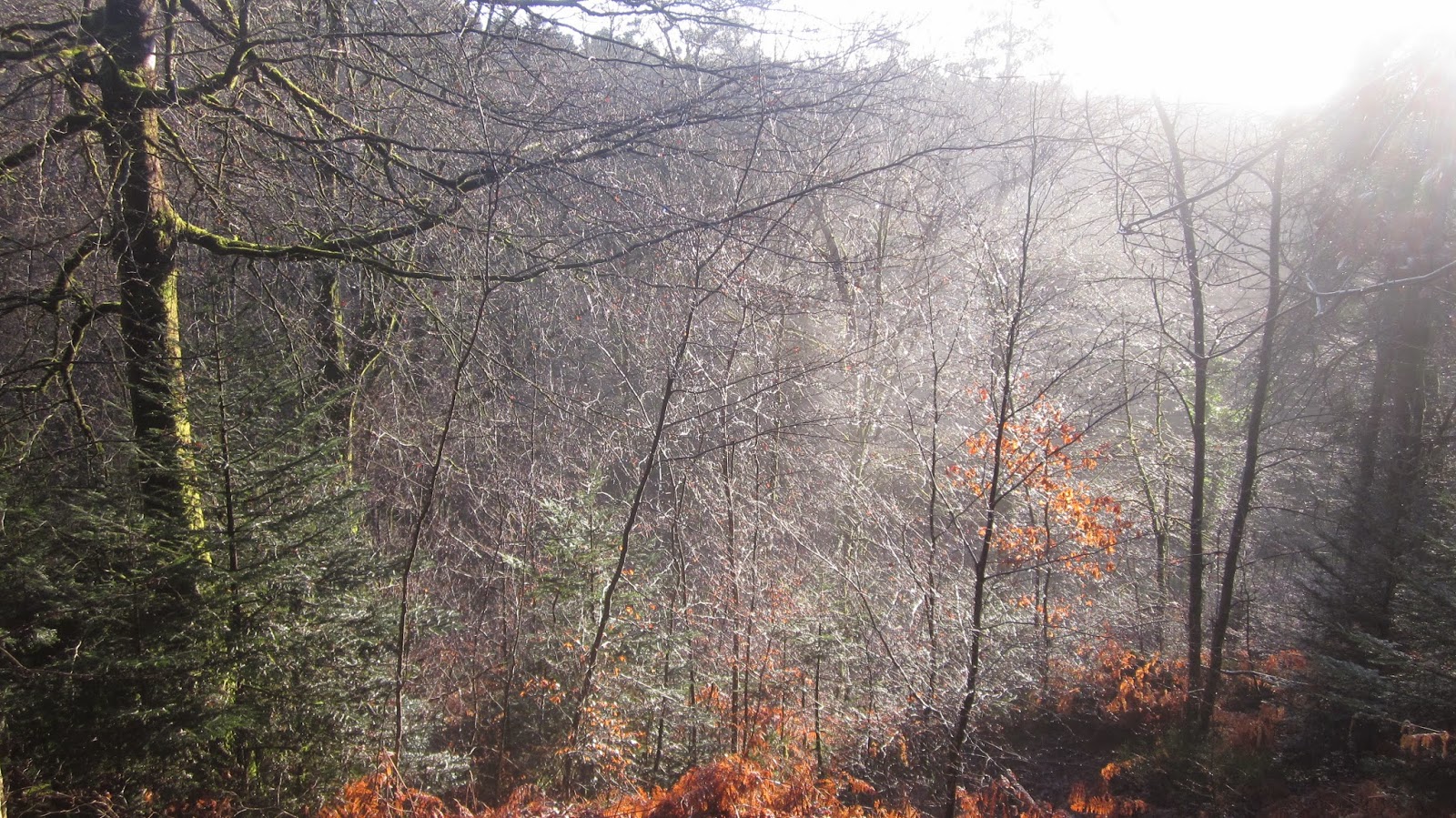 Walked for hours today, on familiar territory but with renewed awareness, thanks to a book by Claire Thompson recently given to me by a perceptive friend. Mindfulness and the Natural World is one of the simply meaningful editions published by the Leaping Hare Press. (That name in itself is enough of a connnection for me as David Brayne's unbelievably rich painting of a leaping hare has long hung on my wall, purchased in the far off days when I had money to invest in art.) I already have The Art of Mindful Walking by Adam Ford in the same beautifully produced series - these books deserve to be better known.
What I am most grateful for today is the reminder of the difference between looking and noticing, and the concomitant quality of mindfulness as an active state. Walking with all the senses is a direct experience, complete in itself and only stifled by the process of thought. Claire Thompson's opening chapter 'We are Nature' joins up all the dots of existence and expresses my own feelings of belonging in the natural world where - as she puts it - 'I don't feel alone, I feel alive.'
Posted by WM at 10:29 pm No comments: 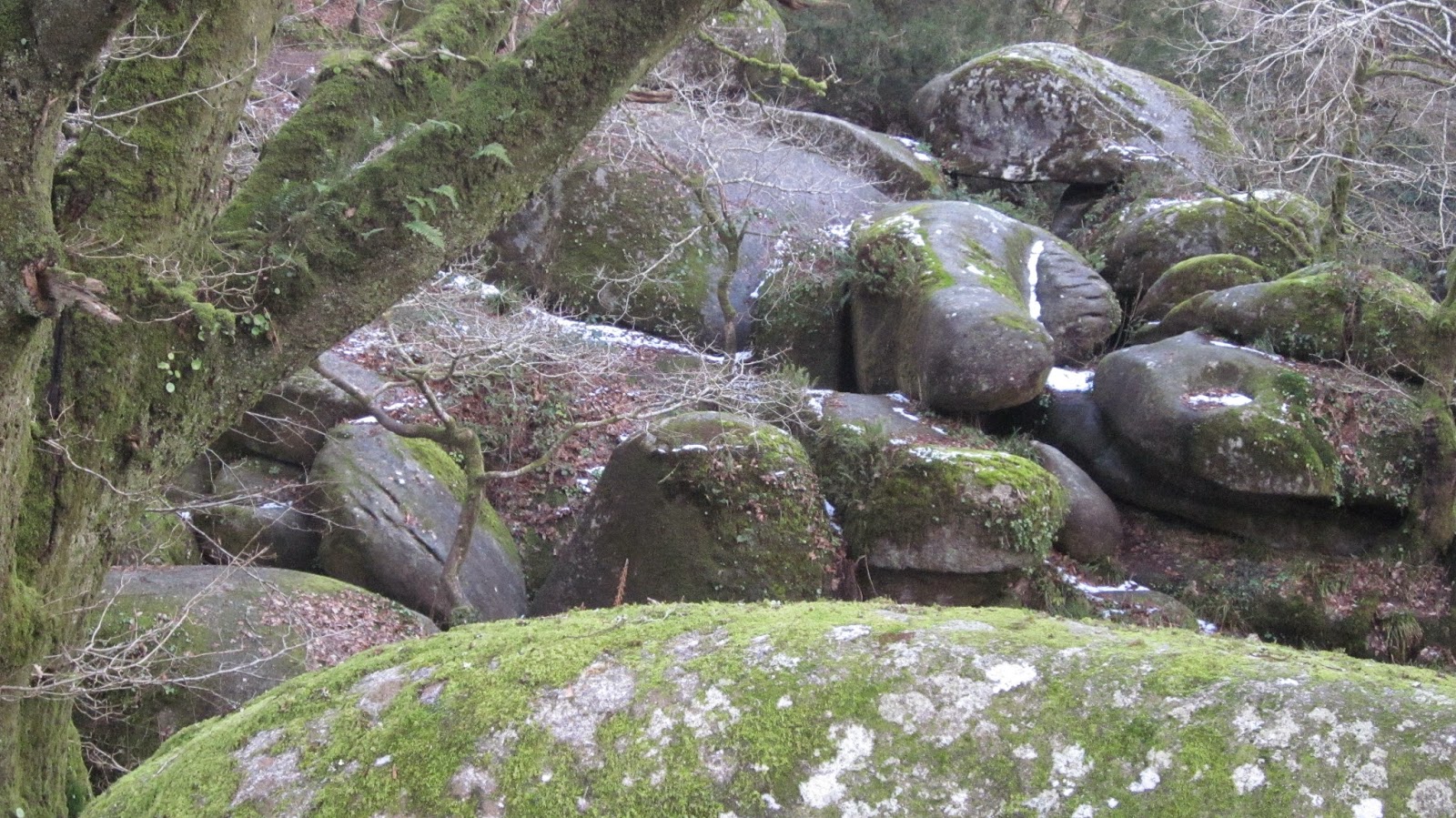 After writing the previous post on this blog, I could no longer ignore what has been gnawing away at me for the last two months, ever since I started work on the new Finistère guidebook. Raising the perennial problem of guidebooks (where the good stuff that digs beneath the surface gets cut and only the basic facts remain) made me finally face up to the most important basic fact of all. I do not want to do this any more.
My last book, Brittany – a cultural history (Signal Books, Landscapes of the Imagination) at least allowed me the luxury of arguments and issues to the extent that overall word and page count would permit, and now there is no way back to the more constricting, prescriptive format of conventional guidebooks, the need to conform to expectation in terms of sites and coverage, to reader profiling and in-house styles.
I need a more creative process, a focus on my landscape writing, whether or no a book in publishable form emerges. I need to work from the inside out and not vice versa. I need to give more time to other things and other people. What I no longer need is to sit at my computer for ten hours a day or travel under frustrating pressure of collecting and regurgitating information in a limited timescale. So I have reneged on an agreement for the first time, something quite against my normal instincts, and in doing so have made a major change in my life.
Walking in the early evening today, the debris of frozen hailstorms still lingering on the rocks in the forest, I felt a sudden sting not of panic but hesitation and uncertainty. What on earth will I be doing at 9 o’clock or 10 or 11 tomorrow morning? I have worked so hard for so many years on a clear progression of full-time, demanding writing projects (usually fired by economic imperative) that I’ve forgotten the sense of freedom that accompanies true creativity.
A minute later, the last ray of a previously veiled sinking sun flashed through the skeletal trees right into my face, lighting a golden path ahead. It was a simple reminder of alignment, of the beauty of doing the right thing at the right time. Whatever I do tomorrow morning will be new and exciting and worthwhile, even if it’s only sleeping in for a change…
Posted by WM at 10:42 pm 2 comments: