Finally made it to this little island today on my fourth attempt, after three boats cancelled because of bad weather. I was beginning to think it would never happen - at least in time to finish my book for deadline. This was the first landing place of St Gildas in the 6th century and later his retirement home after an illustrious foundation of the abbey which exists in more recent form at what is now St-Gildas-du-Rhuys on the mainland opposite. I needed this trip to complete my writing on the saint's wayfaring in my new book, a chapter also covering another island off the north coast of Brittany.
Today was beautifully clear and sunny, but the wind was cruel and made what should have been a great day's walking into a bit of an ordeal.
Direct reference to St Gildas is in the name of the port itself, a sacred spring on one of the many wonderful beaches and the church. This contains a large 19th century painting of the death of the saint, showing the devotions of his monks. There are also two statues of the saint, a ceremonial banner and the words of his canticles. I am a week too early for his special day. The fontaine has no statue and looks sadly neglected, with a dribble of water from the cliff finding its way out through supporting platform. It is also completely unsigned and not particularly easy to find without effort.

That said, the tiny bourg is attractive, despite everything being firmly shut on this January day and no-one about. I was the only outsider on the boat over from Quiberon, the other fifteen or so being welcomed by family on arrival or carrying large cool boxes for some kind of shell-fish activity. On the return journey huge whole fish were stacked in iced crates on the passenger deck.
The scenery of the island is magnificent, with a coastal path of 17 km in entirety and no constructions outside the one village - with the exception of three forts from the 19th century, one at each end and one on the highest point of the island.
I shall explore some of the interesting history of the island in my book and definitely return for more of the wild beauty of the landscape on another trip outside the winter months. It is only a 40 minute run on the ferry from Quiberon - weather permitting. 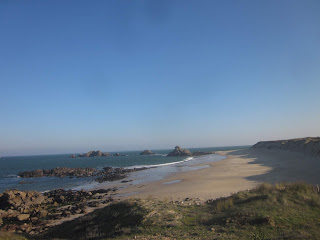