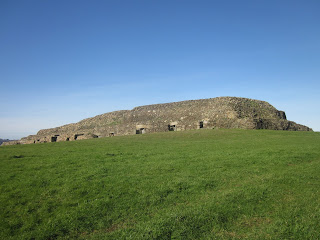 The funerary monument at Barnenez is probably the oldest structure in Europe. It is a powerfully impressive place to visit. This enormous cairn (now 75x28m), orientated east/west, was constructed in two phases: five tombs built from local dolerite date to about 4600BC, and another six made from granite taken from nearby Ile Stérec were added perhaps a thousand years later. The dry-stone work of the overall structure, a huge carapace of smaller stones protecting the graves, is remarkable for its time, and the actual tombs show a range of techniques from chambers shaped by megaliths to tholos-style circular roofs. The architectural abilities and degree of organization demonstrated rather give the lie to the concept of a primitive prehistoric society.
The land was acquired in the 1950s by a developer involved in public works construction. He used another nearby cairn as a quarry, destroying it in the process, and had begun breaking into the existing monument in 1955 when protests led to a halt in the demolition and the first prosecution in Finistère for deliberately damaging an important historical site. Four tombs in the westernmost later section had already been slashed through by the diggers, leaving an unexpected cross-section view for visitors today, demonstrating the variety of design and execution by the Neolithic builders. 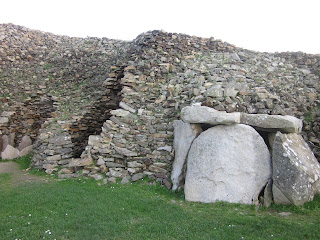 Careful excavations were carried out in the following twelve years, as well as conservation and restoration work. André Malraux, the minister of culture in the 1960s, famously and fittingly, called Barnenez the ‘neolithic Parthenon’. Finds were not prolific, but they included pottery fragments, polished axes, arrow-heads, flints and a later copper dagger, attesting the continued or renewed use of the site. Some equivocal carvings include an idol’s head with spiky head (or is it a shield), cup-shapes and wavy lines (like those seen at Carnac). Recently, traces of red and black colouring have been identified, suggesting artwork.

The landscape has changed considerably since the construction of the monument. Now the sea of the Bay of Morlaix laps at the foot of the prominence where the cairn was situated. This gives quite a different impression from the original setting, where the bay was grassland with a river running through it. Rather than being sited to astonish passing travellers or signal a ritual rendezvous to those arriving by boat, perhaps its size and solidity are more a weighty reminder to those on the low hills across the water – this is our territory, marked by the graves of our significant ancestors. 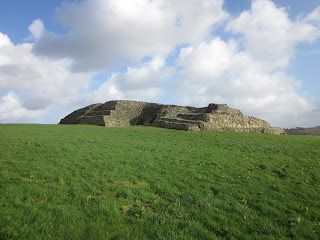 A great degree of confidence and security led to the foundation of this cairn, and ensured its re-use by later generations. As the balance between men and the earth began to shift for the first time with settlement and incipient farming, control of the environment became an issue. Construction of monuments that carry a sense of permanence and anchor a people to their land is one manifestation. The pride and satisfaction of extending their practical knowledge and skills to complete such a memorial must have been enormous. It is an expression of living community as much as reverence for the dead. Smiles and laughter, mixed with grief.
Posted by WM at 6:21 pm No comments:

MOOR
It was the moor that opened us
To freedoms of the horizontal plane,
So hard, so soft, a world of
Pluvious air, wrapped every nuance
In pale folds of brume.

The moor-grass changed each season:
Young, verdant, later bleached of life,
We saw beyond all reason,
Leaning locked against the rock, with
Sun-gleamed quartz a white sheet
For our backs.

Lulled by a rare ease like the buzzard’s soar,
We lived a rainbow on that moor.

Our footsteps fell on stony tracks
Where what might be was stretched out
Vastly, over tracts of gorse and broom,
Hemmed only by the distance of the view.
You talked and talked, the words like litter
Scattered on a breeze that rippled
Brownly over bracken seas.

Moor-covered hills with mountains
In their DNA, hold on to every memory:
A little piece of you, a part of me,
Still strewn like jewels across the heather
A lasting spawn
Of days we spent inside that weather.

It nailed our colours from the very start,
Your green eyes and my grey heart.
Posted by WM at 8:58 am No comments: