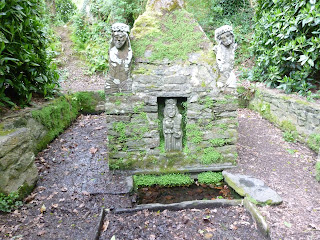 September seems to have disappeared in a frenzy of writing, finishing the first draft of The Stolen Saint and then knuckling down to the much harder graft of the second, resolving any issues of chronology and continuity. The simple day to day calendar coherence has been amazingly hard - I don't remember any of this sort of problem in my first two novels, although that was rather a long time ago and perhaps I just ignored such things in those days. There are two visits to a market by main characters and in the first it is established that the day is Thursday. All the narrative fits around that, except that the second visit was written as if it was a Monday, with lots of knock-on effects that are difficult to resolve. That is one tiny example of the myriad of complexities I've been struggling with. My calculator has been much in play for dates of births, marriages and deaths, from 1917 onwards, rationalising the ages of characters in relation to others. It has not been easy with four generations to contend with and some of the most important characters long dead.

So what is the book about? There is a main character and her progress in coming to live in a village in Brittany is the basic storyline. She is Breton by birth, but has been living in London, and most of the characters are Breton or French or both, with a few British exceptions. There is a strong historical side with Breton culture and popular traditions underpinning the 'plot', such as it is, which concerns two rival saints from the Dark Ages. However, this is a novel about people and place primarily, even if magic and mystery going back to the neolithic sneak in. To sum up, it's a hymn to Brittany, like all my books.

Out in December, it will make the perfect Christmas present......

Taking advantage of what may be the last of the good weather for a while, I walked in the Monts d'Arrée today above Commana. The fontaine of St Jean and its little lavoir has been very lovingly restored by a local association. It stands alone beside a track, the accompanying chapel long since destroyed, with a young oak tree to shade the rough schist slab that has been thoughtfully placed to serve as a picnic table. A menhir-like stone stands beside this. We had a wonderful lunch-stop here, although for some reason the dog flatly refused to drink the spring water, which looked very fresh and clear. He is not usually so scrupulous and was to regret it as the day got hotter and hotter, and our walk turned out to be quite different from what I'd planned.
Moving on to Mougau Bihan, I wanted some new photos of the large neolithic alley-grave, but the whole place was overrun by camping-cars, picnickers and sun-bathers, so after one quick shot, decided to give it a miss. Just opposite is the entrance to the Korrigan Trail, a 2 kilometre circuit across the marshlands in the valley and lower slopes of the high hills. This route is all I had intended to do, given the temperature and the fact it was a big day in the Tour de France and I didn't want to miss anything exciting. But the trail was closed, not only by rough barriers, but a tractor parked in the narrow entrance (that has been recently created) to prevent any access.
Thwarted on two counts, we continued along the road for nearly a kilometre to join one of the main paths up onto the hills, and climbed steadily (endlessly, it seemed) in full sun, until I took advantage of a narrow off-shoot path I'd never used before, but calculated must come out somewhere near the main summit path which follows the crests of the Monts d'Arrée. Eventually we reached the junction of several different routes which I know well. Nearby Croaz Mélar was a very cool spot for a long rest. The cross marks the spot where young Mélar's severed head chose to jump back onto the body after a dispute between two teritories over his relics. Here on the border, he opted for the north, and the reconstituted body was carried back to Lanmeur where an extraordinary crypt still contains his statue.After reflecting on this gruesome tale - and I leave out the earlier hacking off of his hand and foot by his uncle - and working out some details of new developments in my novel to be written later today, we retraced our steps slowly and wearily downhill.