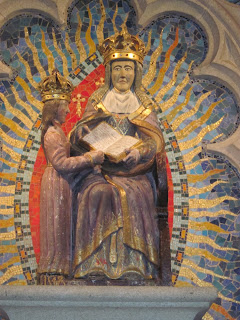 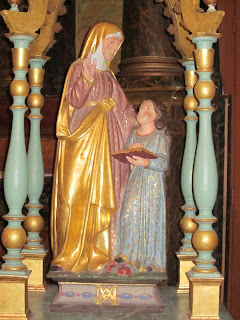 There is a strong tradition that Saint Anne, mother of the Virgin Mary, was a native of the Armorican peninsula (before Brittany existed), coming from the area of Plonévez-Porzay in the Bay of Douarnenez. The famous folklorist Anatole Le Braz (b.1859) recorded the legend that she left the region as a widow and travelled to Judaea. There she married Joachim, father of Mary, but later returned to her native land, where a lesser story suggests Jesus and Peter came to visit.

In Christian tradition Anne is a minor figure of the Apocrypha. Her iconography in religious art shows a tall woman with veiled head, often teaching her young daughter Mary to read. In church of Lampaul-Guimiliau, a notable Parish Close in northern Finistere, an extraordinary decorative altar panel shows Anne resting in bed having just given birth to Mary, who is being washed by the midwife.
There may be a connection between Anne and the Celtic goddess Ana, and indeed she is honoured at the church of Commana by a magnificent 18th century baroque altarpiece. Here a statue of Anne is said to have been found in a stone trough, part of the same linguistic confusion that led to stories of saints arriving on Breton shores in stone boats, as in old Breton 'koum' is both a valley and a stone trough (and the Latin for little boat is 'cumba'). One glance at the local landscape gives the game away.
Anne is the female patron goddess of Brittany and widely venerated at shrines such as Ste-Anne d'Auray, the largest Catholic site in the region, honoured by a papal visit in the 1990s. It is documented how in 1623 a local peasant had a vision of the saint telling him where to dig up her staute and rebuild a former chapel. The bishop of Vannes believed the story and the shrine was constructed.
The photos all show images from Ste-Anne La Palud (Anne of the Marshes) on the Finistere coast where she is said to have landed on return from the Holy Land.