St Pol and a taurine stalker

I have been tracing the scenes of St Pol's journey in eastern Léon, looking at the landscape and likely changes over the intervening centuries. Indication in the earliest Vita has the saint moving by land possibly along former Roman roads towards his destination of what is today St-Pol-de-Léon, where his cathedral stands. There he arrived in the wooded valley of Gourveau, and struck the ground with his staff to produce the source which still feeds an enormous stone lavoir by the road leading down to Pempoul from the town centre. 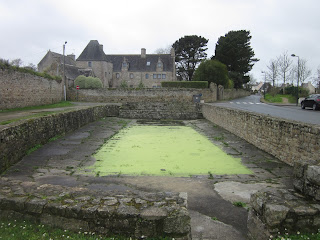 He met a pig-man of the local lord who offered to conduct St-Pol to his master. First they arrived at the almost deserted oppidum which was to become his mainland settlement. Here he finds a wild pig with its young, swarms of bees, a bear and a rampant bull. The event has distinct echoes of Aeneas' arrival in Latium in Vergil's Aeneid, a work that was my constant companion for more than twenty years. In Book 7, Latinus tells of the omen of a swarm of bees in a special laurel tree, interpreted by the soothsayer as the arrival of strangers who will take over. In Book 8, Father Tiber gives Aeneas a sign that he has reached his destined place: he will find a huge sow and her litter of thirty beneath the oak trees. Wrmonoc, the monk at Landevennec abbey who wrote St Pol's first Vita in 884, must have been familiar with the classical text, and adopted its foundation symbolism. Pol's subsequent blessing of the boundaries (earth-and-ditch defences) with water and salt also has a distinctly pre-Christian tang.
St-Pol tamed the pig and domesticated the bees in hives. The savage inhabitants fared less well: the bear ran off and lost itself in a deep ravine, while Pol faced down the rampant bull. One can't help a sneaking suspicion that it was the same one he had remonstrated with at Lampaul-Ploudalmezeau, one who could not resist following his holy opponent across Léon for another ticking off. A taurine stalker is just another potent enhancement factor for the saint. 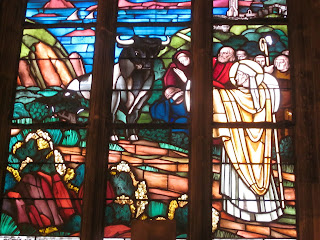 There is another tradition of St Pol, on the north coast of Finistère, perhaps indicating a separate journey at another time. But it does include his arrival at the Pointe de Beg Pol (the point of the point of Pol!) by the current Phare de Pontusval in a stone boat. When locals attempted to drag this item by oxen, the beasts stopped definitively on top of a nearby knoll and the stone remained there. Today the little chapel of St-Pol stands on the spot in a rather special setting among boulders. 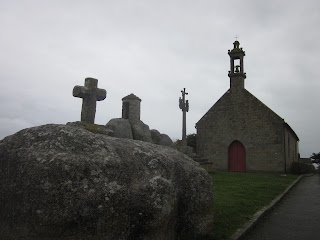