Eighteen months after becoming a French citizen, I finally got to have a ceremony to celebrate the event. Last year I was not invited even though some of these ritual affairs were held and reported in the press. The Prefecture at Quimper failed to answer any of my messages. When I went there to ask directly why I had been overlooked, I was basically told to go and queue up with the foreigners awaiting visas, cartes de sejour, etc., which I declined to do on the grounds I was already a citizen. It seeemed like a matter of principle at the time, in the face of rude dismissiveness from the 'Welcome' staff.
After mulling for a long time over whether this really mattered and deciding it did, finally I wrote to Président Macron - this is easy to do through the Elysée Palace website - and asked for his help. His office replied to me within a week and soon after, lo and behold, I received a letter from Quimper assuring me I would be on the list for the next ceremony. It is a pity that it takes the Président of the Republic to make an administrator in Quimper do their job correctly and politely.
So it happened this week, a grand official occasion, admirably presided over by Aurelien Adam, the new Directeur de Cabinet du Préfet, who was excellent in every way. I was quite moved by his words and the sense of significance he managed to convey. I even had a few personal words with him later on as we both left the building at the same time. There were many people there, more than 150 including those receiving the official decree of citizenship and their family and friends. I really enjoyed seeing some of the palatial rooms of the Prefecture, and singing the Marseillais with a large group of many nationalities of all ages, united by our Frenchness. The only time I heard a language other than French was when two British people saw fit to speak loudly in English just before the ceremony began. I edged as far away from them as I could get.
I was delighted that the mayor of my commune, Benoit Michel, took the trouble to come all the way to Quimper to support me and share a celebratory drink afterwards. It really added something to the day. At last I have my decree and various texts of edifying Republican values to ponder. Despite having had an ID card and a French passport for a long time, the process now feels complete and I really do feel French. And I say both Vive La France and Vive La Bretagne.
Posted by WM at 8:04 pm 2 comments: 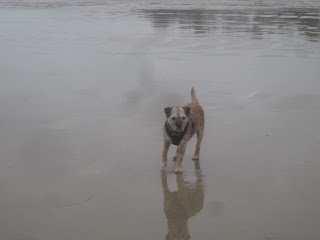 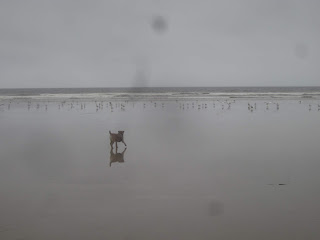 On the beach at Pentrez this birthday morning - Tex in good form.
Posted by WM at 4:42 pm No comments: