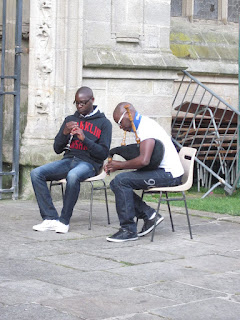 Yesterday's competition was in fact won by Tangi Josset and Yannick Martin, who performed first and were indeed terrific. The audience was very appreciative, except for a middle-aged man who had been standing near me and behaving oddly throughout, talking loudly to himself while the duo were playing. As the rest of us clapped enthusiastically, he spat on the floor and muttered almost in my ear 'They're not Bretons'. A pretty repulsive reminder of why Yannick Martin felt compelled to go to court last year with Breiz Atao, a small shower of right-wing Breton nationalists who lose no opportunity for racist slurs on their unsavoury website. Twins Yannick Martin and Tangi Josset were adopted by two different Breton families as children and today are amongst the most talented of all Breton musicians - and that's saying something. I hope to hear them again at Lorient in August in the great InterCeltic festival. With a bit of luck, M.Allot will be there too...
Posted by WM at 5:02 pm No comments: 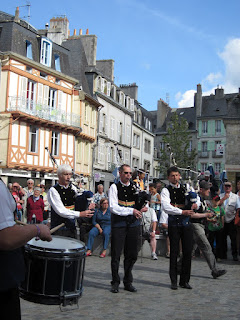 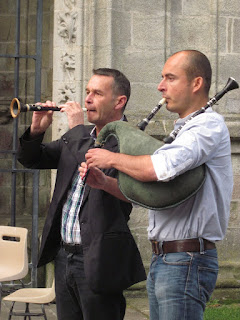 Went to the wonderful Festival de Cornouaille in Quimper and was not disappointed by the quality of musical offerings. Amongst bagad (Breton bands) and pairs competitions, I was very taken by the gorgeous Josick Allot (above), playing the bombarde with Erwan Le Hir on the biniou. I would defintely give him the gold medal in pretty much any contest. Except maybe the Olympic tennis.
Posted by WM at 3:41 pm No comments:

Nantes of many faces 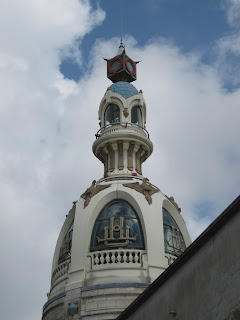 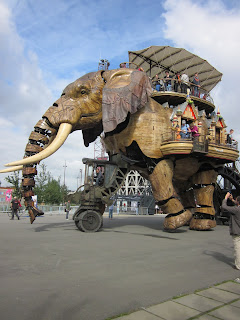 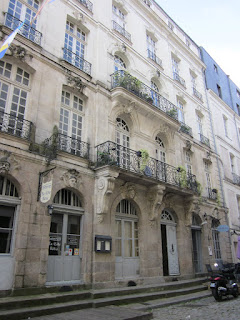 I've been in Nantes this week to write a profile for London City airport. It's three years since I last visited and I'd forgotten the extraordinary vibrance and energy of this dynamic place. The city has had to reinvent itself several times and has done so with panache. Much of the exceptional 18th century wealth still so visible today in the merchant's houses with their iron balconies and sculpted 'masks' came from the 'triangular trade' whereby ships left Nantes for Africa, took slaves on to the Caribbean and returned to France laden with sugar and spices. This difficult theme in the city's history is in no way played down. The chateau museum graphically depicts the material benefits and the unspeakable cruelty of the practice, and a new Memorial to the Abolition of the Slave Trade has been established beside the Loire, including a long subterranean tunnel full of facts and quotations about the struggles of the abolitionists all over the world. A bold strategy, making virtue out of necessity!
Despite having magnificent heritage in the restored Chateau of the Dukes of Brittany and the gleaming Gothic cathedral, greater emphasis is placed these days on more innovative offerings, and many strategies are in place to lure visitors from the medieval centre to one bank or another of the Loire. Le Lieu unique is an arts centre set up in the old factory where the famous LU brand churned out biscuits in their millions. The interior remains a rude mass of concrete and metal, carefully made over in a minimalist kind of way - the underground toilets are deliberately awash with graffiti - to satisfy some criteria of the current craze for industrial art. The lone remaining blue and red tower with its gyroscope is now open for a panoramic view over the city.
On the Ile de Nantes the vast former ship-building works is now a centre for machines of a very different kind, like a larger than life mechanical elephant that will take you for a ride. With the decline of the port, as the Loire silted up and St-Nazaire developed to the west, Nantes has niftily adapted its maritime legacy to meet the service demands of a new age of tourism.
As to the fact that Nantes was capital of Brittany for a thousand years until the Vichy government severed the tie during WWII and the city became head of the new region of Loire-Atlantique soon after the war - what better opportunity than to shift identity once again (and totally avoid the complex political issues of reintegration with the four provinces of new Brittany - over Rennes' dead body) and become Nantes of many faces - Breton in some undefined way, but mainly top city of the Loire, commercial centre of all the surroundings territories, focal point of north-western France.
It's all done very cleverly, like a conjurer's sleight of hand, with the visitor so taken by the razzledazzle of festivals, initiatives, colourful street life, building developments and fluvial activities that there's really no time for analysis, just pure fun and enjoyment.
Posted by WM at 2:45 pm No comments: 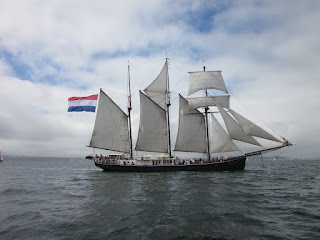 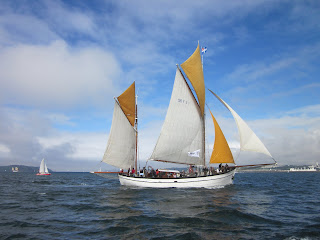 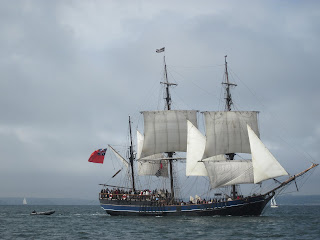 Spent a fabulous day at Les Tonnerres, the international maritime festival held in Brest every four years. It was an extraordinary pageant of ships from all over the world, and a vast tent city of stalls and exhibitions running for several kilometres around the commercial port and on both banks of the Penfeld river below the chateau.
A trip out on the Rade in the morning to be in amongst the parade of schooners, sloops and cutters of every variation imaginable was a sensational experience, despite my ignorance of matters maritime. Offerings on land were pretty good too with all kinds of music, food and crafts from Brittany and the invited nations - Norway, Russia, Mexico, Morocco and Indonesia - as well as boat-building, historical reconstructions and guided tours of many ships in dock.
Get along now or don't miss this in 2016!
Posted by WM at 8:03 pm No comments: 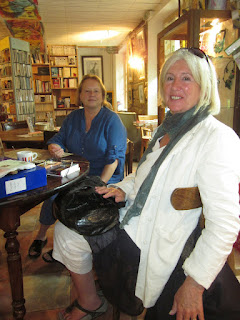 Today I had the pleasure of meeting poet Angela Locke for the first time. We have corresponded about a collaboration for her creative writing course to be held here in Finistere in September but never actually spoken. It was a significant meeting, one of those special occasions when making a connection has immediate and surprising consequences. We didn't have time to do much more than than exchange compliments about our books (I have recently read her stimulating collection Whale Language: Songs of Iona) and talk of arrangments for me to give a talk and a walk (yes, I can even do both at once in an emergency) for her group when the time comes. But there was a strong current of sympathy, humour and incipient affection running across the table even on such brief acquaintance, and I left for another appointment looking forward very much to seeing how she works and contributing to the process myself.
I was driving along happily afterwards thinking of all I had to do at the weekend with another couple of ferry talks to give and Wimbledon finals to watch when - suddenly the whole beautiful entirety of the book I have been wanting to write for the last two years and never quite glimpsed full-on, crash-landed in my head. The afternoon has passed in a whirl of ostensibly functioning on a normal plane whilst idea after idea flowed out and everything I've been thinking about for so long now without form or substance presented itself in a coherent, natural sequence.
This happened to me once before. After spending an afternoon walking and chatting with sociologist Anne Guillou about things completely unrelated to any creative work, the whole story of the Five of Cups leaped out of my brain, fully armed like Athena from the head of Zeus. But that book was hell to write, so let's hope the similarity ends with the initial inspiration.
It's been a great day. Thanks, Angela.
Posted by WM at 7:56 pm No comments: 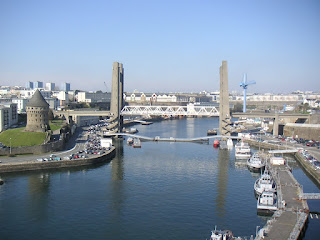 I've been in Brest on and off lately. It's a time of change, which has involved considerable upheaval for drivers over the last few years. A new tramway with 27 stations has been installed to connect workers' residential areas to the east and west with the centre. The route will also cut down a bit of walking for tourists visiting both sides of the Penfeld river.
There's been a certain amount of urgency to finish the elaborate project before the International Maritime festival this summer. This huge event brings thousands of boats and tens of thousands of visitors to the city. I'm doing a piece for the Independent, so will have a chance to see first-hand how the system copes under the strain. When I contacted the tramway press officer a few months ago to ask about journey costs for a guidebook update, he couldn't tell me. Strange, as I discovered the ticket prices had already been published on the internet. Hope someone has told him by now.
Part of the system is operational. Only this week one of the smart new trams hit a car and was derailed, fortunately without injuries to anyone. In the west near the British mecca that is IKEA the new tracks are already surrounded by a lavish display of weeds, as if no-one thought to put a membrane down or, more likely, lay in a stockpile of Roundup.
But I have to say that there was noticeably less traffic around in the central areas when I was there last week. Could it all actually be a good thing? Let's hope so. After all, as old photos in the endearing Tour Tanguy (left in the picture) town history museum show, they only took the old tram line out in the 1970s.
Posted by WM at 11:34 am No comments: