The late 19th century megalithomania may be making a comeback. Last night on History of Ancient Britain, Neil Oliver announced, with evidence getting in the way rather less than his hair in windy Brittany, that the Carnac alignments were the work of Mesolithic hunters, who apparently needed to make some kind of inarticulate and yet highy meaningful statement about identity in the face of the new world of the neolithic hunky farmer type.
A rather vague Scandanavian academic from Nantes University accompanied Neil into the Table des Marchands (at Locmariaquer - quite a different site incidentally, which was not explained). I'm totally mystified why they were stooping low and then pressing themselves up against the chamber wall with torches inches from the rock carving when in fact the tomb is large, airy and lit by electricity these days. The decorative hook or crook shapes were pronounced to be mesolithic images and directly compared with a neolithic axe motif above. WTF???
All I can say is thanks Neil, for revealing this startling new perception for us wild backwoodsmen of the Armorican peninsula who have foolishly fallen into the trap of neolithic marketing spin and gone along with all that presumably fake radio-carbon dating and comparative site analysis. Thank goodness the veil of truth has been drawn back - and on a popular TV programme to boot. There's clever, as my father would have said.
Posted by WM at 3:50 pm No comments: 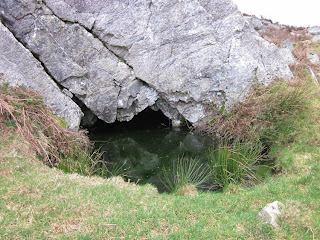 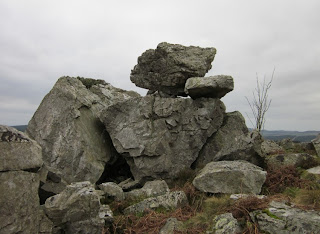 Started my customary Sunday circuit round Mont St-Michel in the Monts d'Arrée today only to be confronted almost at once by a convoy of 4-track vehicles driving across the moor and then right up onto the chapel hill via a narrow walkers' path, flattening plants as they went. Very depressing sight in a regional park where vehicles are strictly forbidden, but the Parc Armorique seem to do nothing to prevent it. Decided to get right off the usual tracks to avoid the noise, smell and intrusion of ignorant motorists, and was rewarded by the discovery of a new world with a mysterious subterranean lake. On another track on the way back up to the parking area, had to get out of the way of five very loud motorised ATVs .... could the Monts d'Arrée be losing its raw charm? And why does no-one do anything about it?
Posted by WM at 9:16 pm 2 comments: