The defacing of stones by mindless graffiti is not a recent phenomenon but I have become mightily aware of it since living in an area famous for its granite boulders of remarkable size and shape. Apart from a few minor examples which are fairly unobtrusive unless up close to the rock-face, there has been surprisingly little of this most brash kind of damage up until now. 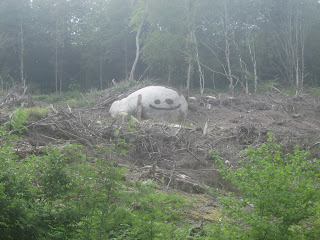 Two recent glaring instances, however, have made me re-evaluate my own reactions. The first appeared a while ago, high up on a steep hillside above one of the main roads out of town. The tree cover has been felled, leaving an open expanse of boulders, dead wood, scrubby growth and churned earth. One of the stones, a pleasingly rounded mass of grey granite has been given two eyes and a smile, courtesy of black paint. And it made me smile the first time I passed, like a sudden revelation of a grinning entity long hidden by forest growth. This anthropomorphism of rock did not make me think of defacement and hooliganism at all, but initially as something rather amusing, the sort of landmark that people driving in and out of the town would enjoy. It is after all the rocks that give this place its life and identity. And people relate more easily to the sort of facile humanization shown here than the apparent in-animation of a mass of stone. I regret this reaction on reflection and attribute it to the fact that the rock is simple and ordinary, un-moulded by dramatic erosion.
The second example has made me angry. A famous rock, mid-stream in the river and hollowed out by natural erosion of granite to resemble a mini-cave or seating-place, has acquired the incised initials DD, writ large above the opening. The main tourist path passes here and the rock itself is easily accessible from the far bank across other stones, so it has become an obvious spot for photos of children or adults sitting inside the rock or filming of atmospheric sequences. I once saw a korrigan (local gnome of spirited character) seated inside the stone as the camera rolled for a Breton themed short or perhaps a tourist trailer. That is harmless fun and in its way does honour to the natural qualities of this environment. The ensemble of river and rock under a canopy of trees pierced by shafts of light is a conjunction of elementals that speaks powerfully to something inside us and defines the spirit of this particular place. 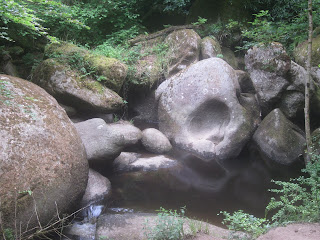 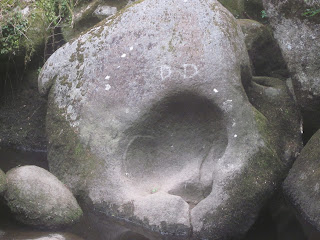 The rock will long outlast the cretin and the letters will weather away, but the imposition of humankind – the engraving of initials is a statement of facile human power over nature – degrades this landmark, as well as the perpetrator him or herself. It is not the work of a child but an ‘adult’. It is not the work a moment but considerable effort.
The fact that I care more about this than the other reflects the important of context in our relationship to particular landscapes. The smiley face is in essence no more acceptable to lovers of natural landscape than the initials, but it reveals at least benign intention rather than an egotistical assertion. The latter instance seems so much more intrusive by its deliberate spoiling of a significant spot for locals and visitors alike, a rock whose whole incredibly long history is mapped in its unique shape, its situation where the combination of elements stands together to create a powerfully numinous experience for those who are open to it.