Texts for my exhibition in October are moving along now, with Moor, Forest and River pretty much finished, and I'm starting to concentrate on a piece to be called Coastal Scenes. Fortuitously, I had planned to take a friend to the coast this week for her birthday treat, staying in a hotel just above the beach at the Baie des Trépassées in the far west. Our first day, after a visit to the allée couverte at Lesconil, we arrived in a thick Atlantic mist, the mass of surfers suddenly bursting into view on the shore as if from nowhere. We decided to walk the 3km to the Pointe du Raz along an undulating coast path, despite the lacks of views, the fact it was already 5 o'clock and that I was limping after quite a bad fall on rocks at the Moulin de Keriolet earlier in the afternoon. We could hardly see the water at all, and arriving at the huge, hideous statue of Our Lady on the point, had no visual sense whatever of being anywhere near the sea, whilst just below us churned one of the most dramatic and malevolent straits in Europe - an unusual perspective on the nature of coast.
Day Two began in heavy rain but we made a slow start and arrived at the Pointe du Van to clearer, drier skies and were able to have a good walk, with views towards the Iron Age éperon barré of Castelmeur. This was followed by coffee in Audierne and a (for me, yet another) visit to Menez Dregan, where the paleolithic cave was still fully uncovered and much more visible than on my last trip a couple of weeks ago. We sat for a long time on a bench further down the coast just gazing at the sea before the long drive home. Although at no point was I consciously thinking about my text, I found myself quite unable to sleep last night, despite being physically exhausted, and several times had to leap out of bed and rush to my desk to make notes, a process that felt at the time not unlike rushing to the bathroom to be sick in the night. 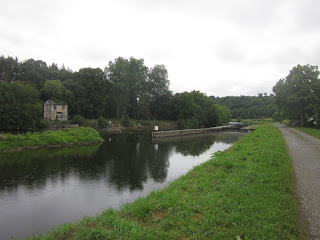 Several things have brought me back to the Nantes-Brest Canal lately, a construction I wrote two books and several articles about quite a few years ago and a territory that once so often mirrored my inner landscape. In clearing out some old CDs I found a copy of the French TV programme in which I appear tallking about the canal. French people sometimes recognise me from that production but I've never actually seen it before, so it was strange to watch my self of eight years ago, so familiar and yet so long gone.
More practically, I'm doing a feature on the canal in Finistère for the new walking book, and yesterday went out to rewalk one of my favourite circuits at Pont Coblant, which includes a 4km stretch of the beautiful Aulne river (a bit insulting to call it a canal here) in countryside far removed from roads and noise of any kind. The inland section goes over a hill to give great long views, particularly towards Karreg an Tan, the Fire Rock, which will also be in the book. 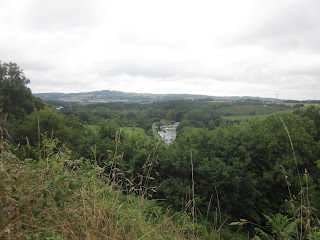 The canal does not start in Nantes, nor end in Brest, but its original military prupose was to link the two naval bases (and Lorient via the Blavet canal south from Pontivy) and provide a secure inland route at a time when Napoléon was frustrated by English naval supremacy and the resulting blockades of Breton ports. Most the 365km length is made up of beautiful rivers - the Oust, the Blavet and the Aulne being the most remarkable - with artifical sections cut and ladders of locks built to cross the hills between their valleys. It was only fully open long after Napoléon's time and became used mainly for the transport by barge of materials like stone, slate, wood and sand. The railway soon became quicker and more economical, with a better organised infrastructure of depots and loading facilities. Great leisure resource though the canal undoubtedly is these days it was always something of an economic white elephant. 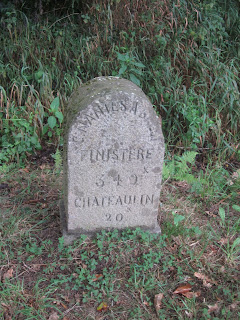