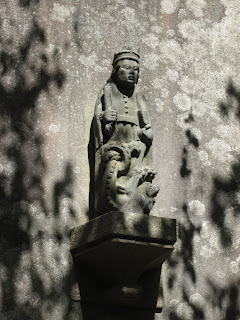 He's a strange one, this Irish saint of royal blood, who ran away on his wedding night to avoid intimacy with his new wife Enora and pursue his devotion to God across the sea. He landed at Lieu de Grève in the bay of Plestin-les-Grèves where his chapel and sacred spring stand near to the shore. Stories later associated with him illustrate the exceptional powers and single-minded courage that form almost a badge of office for many Breton saints.
The substantial fontaine, dating from the late 16th century, is a prophetic one. The rituals vary but pieces of bread are of the essence, If you have been robbed and have your suspicions about the culprit, take three pieces of bread, name each one and throw them into the water. The one that sinks will be the guilty person. This tradition has muddled itself with another concerning engaged couples, who are also to throw in three pieces of bread. If two come together without the 'saint' (or third bit) intervening, they will be happy. Obvious you might think, but rumour has it that the bread used should be stolen... In fact, the same ritual with the magic number three is used to answer any question there - will I marry, will my husband survive a sea voyage, will my child live - but in this case the answer is yes if two of the pieces float towards the third saintly morsel. Ah, the finesse of ritual. 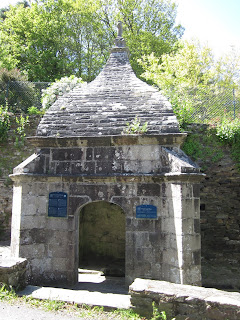 St Efflam has another curious legend to his name. He came across King Arthur engaged in combat with a dragon on the towering rocky pinnacle of Grand Rocher overlooking the bay. When the hero failed to make headway and both combatants retired for a half-time break, St Efflam stepped in and called the beast out of his lair. The sight of the raised cross was enough to daze the poor dragon, who meekly submitted to a command to throw himself off the precipice. The moral is clear: faith is stronger than brawn (and dragons should always look away quickly when faced by saints).
Enora, the deserted wife, showed admirable spirit in following the virginal Efflam and landed a little way off near Le Yaudet where she was picked up in a fisherman's net. She was soon running from the local tyrant, who chased her lustfully back towards Efflam's haunt of Lieu de Grève. There a miraculous paralysis overcame the pursuer: he swiftly repented and was released from his plight by Efflam himelf. Enora established her own oratory near that of her husband and remained close but chastely separated from him until her death. 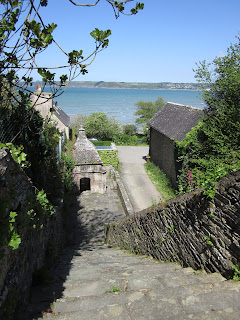 Good start to the New Year, with lots of calm weather for tentative walking and lots of new writing getting itself down on the page. I've been working on the Roman chapter of Wayfaring in Little Britain with a trip to Corseul this week, considering the notion of procession in the short journey from the town to the hill-top site of the Temple of Mars. I'm also thinking of reviving my idea for a short Walking Meditation book if I can find the right artist for a collaboration.
Some solid work on the parish close exhibition has been achieved in the first days of January and I can now see the whole thing 'in the round' and connnections between the different pieces are clearer. There have also been new poems, so something in my head is still working - an encouraging and surprising discovery.