Ile Grande - seeing things for what they are 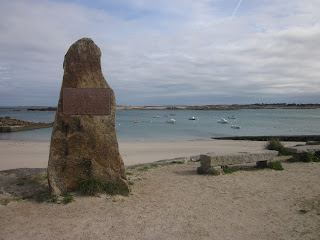 I recently visited Ile Grande off the coast of Cotes d'Armor, although not really an island as joined by a bridge over the tiny separation from the mainland. It is very built-up in the centre, but the 7km coastpath offers a touch of wild landscape and great views, like the Ile Aval, Apple Island, the Breton Avalon. Ile Grande was once one of the most important sources of granite in Brittany and the largest coastal extraction site. The much-prized building stone was used from the 14th century onwards in works like the magnificent cathedral of Tréguier and, later, the famous viaduct of Morlaix. The heyday of quarrying was in the second half of the 19th and early 20th centuries, when the island and the surrounding uninhabited islets were exploited by more than a hundred quarrymen. A modern sculpture honours the profession of stone-cutters. 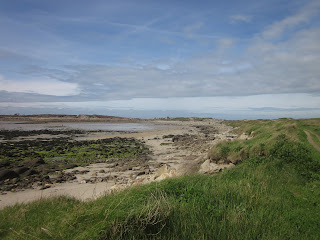 When I walked from the harbour of St-Sauveur northwards, at low tide, I was soon presented with a gleaming stony promontory and slightly puzzled to see what appeared (without my glasses on) to be a ruined chapel, clearly outlined against the bright blue sky. Nowhere had I heard of or read about such remains on Ile Grande, but my immediate instinct was to walk out there to experience the remote spot that had once attracted holy men. My spirit of place hat still sits firmly on my head. It is of course a form of romanticism to be irresistibly attracted to long dead churches, abbeys and chapels, to feel the motivation of their founders in the landscape and align oneself with the simplistic concept of an isolated primitive life. 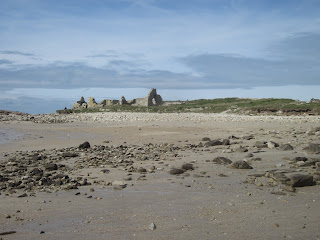 I did not have to walk far before before realizing that it was no chapel, and after clambering over rocks and then following the beach to reach the site, the remains were obviously dwellings of some kind - houses of quarry-workers was a reasonable assumption. I sat there for some time, thinking about my own reactions and whether I would have set off along the peninsula on a very hot day when I was already tired and keen to finish my excursion if I had seen or known that the ruins were housing. Is that too prosaic a purpose? Why should one be prompted by one assumption and not the other? The longer I stayed there the more I realised that the quarry-workers would have been far more in harmony with the landscape and known its every nuance rather better than a cell of monks fasting and praying away.
In fact later research revealed that the buildings were seaweed-gatherers cottages originally, then used as shelters during the main quarrying period and later converted into a youth hostel, which was destroyed by German target practice during WWII.... 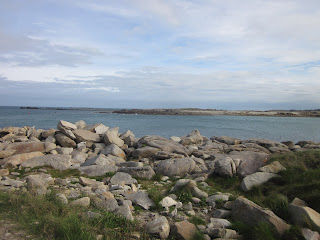