The Druid that never was ... 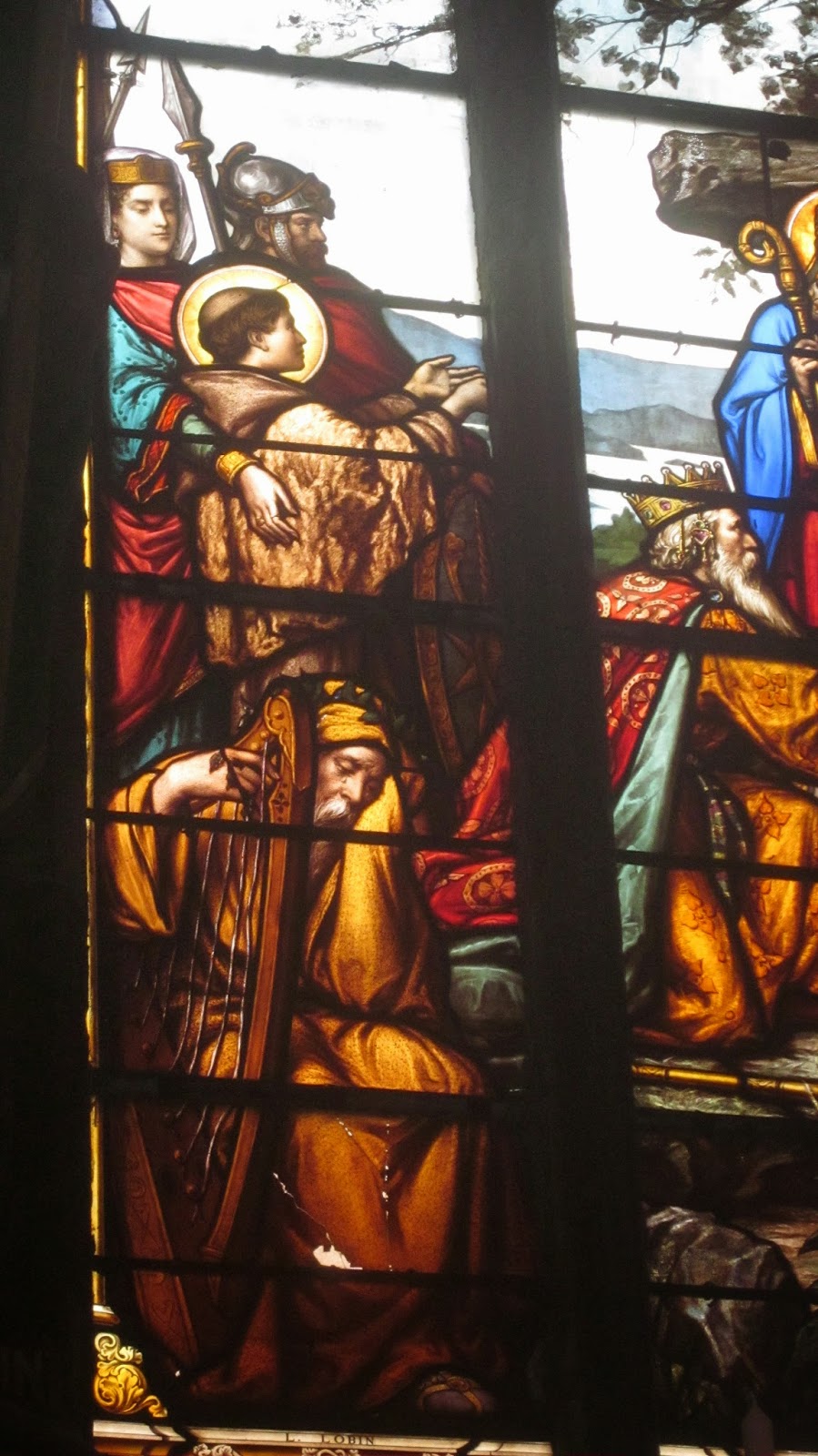 I've been working a lot lately on 'traditions' that were invented in the 19th century to promote certain images of Brittany or to try to attract people to particular areas. The Foret de Paimpont's artificial association with Arthurian Brocéliande is a case in point, fostered especially after the publication in Paris in 1812 of La Table Rond, a work of high Romance. Its influence encouraged men like Blanchard de la Musse to seek out suitable physical places for scenes from the Arthurian tales in their own neighbourhoods. He decided to locate the Valley of No Return in the Foret de Paimpont. Later it had to be moved because they built a factory in the original setting, but that's another story...
The glass window above is from the remarkable church at Rumengol, richly decorated by Marine artisans from Brest. The window is late 19th century and it shows a sad Druid lamenting his loss of status as two early Breton saints lord it over his former domain, setting up a statue of the Virgin Mary on top of a dolmen (neolithic burial place). Leaving aside this latter anachronism, the illustration purports to relate to the very well-known and strong tradition that the church was built on the site of a former Druid sanctuary, where human sacrifice was carried out. The adjacent forest of Cranou is certainly an atmospheric place with plenty of oak trees even today, and it may well once have been a focus of Druid ritual, but in as much as any wooded area - which doesn't narrow things down much in Brittany - might have been.
The Druid connection has given rise to songs and stories galore, incuding the legend of St Guenolé, outraged by the thought of pagan practice, running all the way from Menez Hom to remonstrate with the Druid and teach him the error of his ways before making poor old King Gradlon build a proper Christian church on the spot.
So where has all this come from? All too often it is impossible to find the end of the thread of local traditions, many of which do genuinely go back to a distant past. But in this case, I think it is possible to point the finger at one individual and hold him responsible for creating an image of Rumengol out of his own imagination. The Chevalier de Freminville (often called La Chevalière for his fondness for dressing up in women's clothes) was no Breton speaker but he had an unquenchable interest in the mysteries of Brittany, and in his treatise of 1829 on antiquities here, came up with a translation of the name Rumengol that gives us 'glowing red stone.' From here chuck in a dolmen and it is but a short bound to Druids and blood sacrifice - at that time it was still wrongly thought that neolithic remains were the work of the Celts. Later writers soon picked this theme up and ran with it - hence we now have an infallible 'ancient' tradition, and the curiosity of this stained glass window. 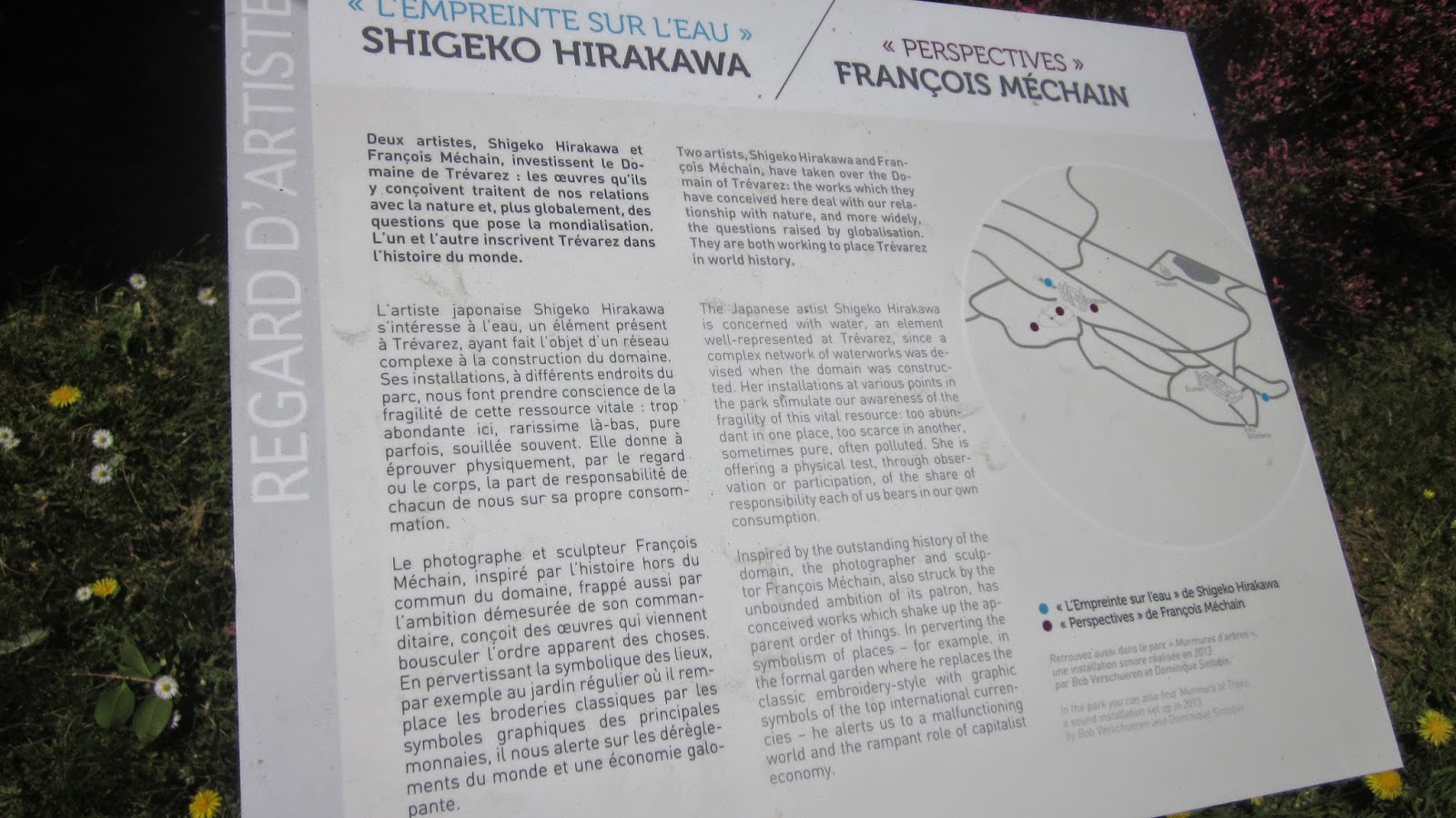 I worked with the Domaine de Trévarez again this year, translating texts for their new exhibitions, and made a visit yesterday with my friend Jeanne to see the artistic creations in the flesh and to enjoy the gardens - plenty of colour already in evidence - in superb spring weather. 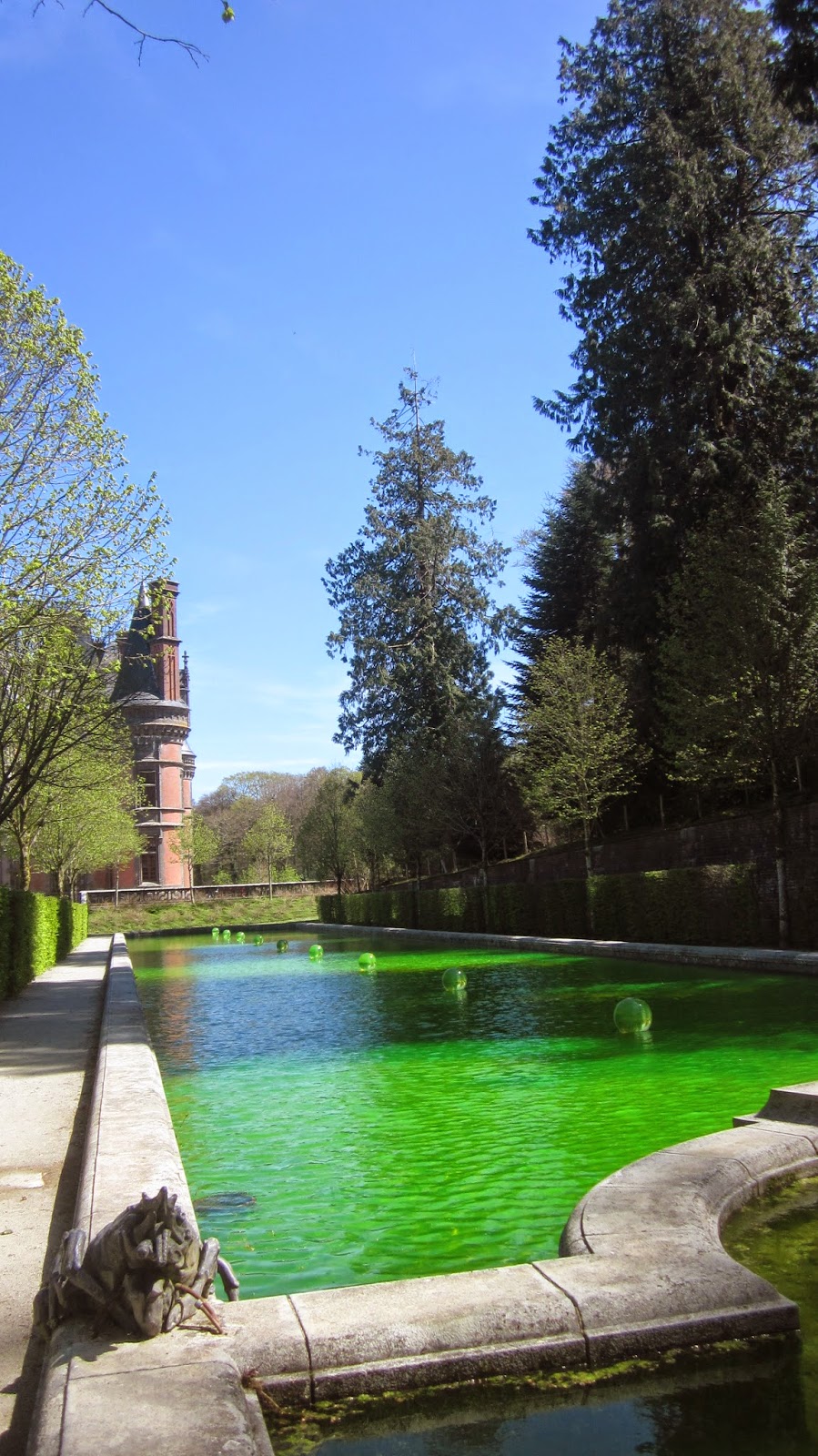 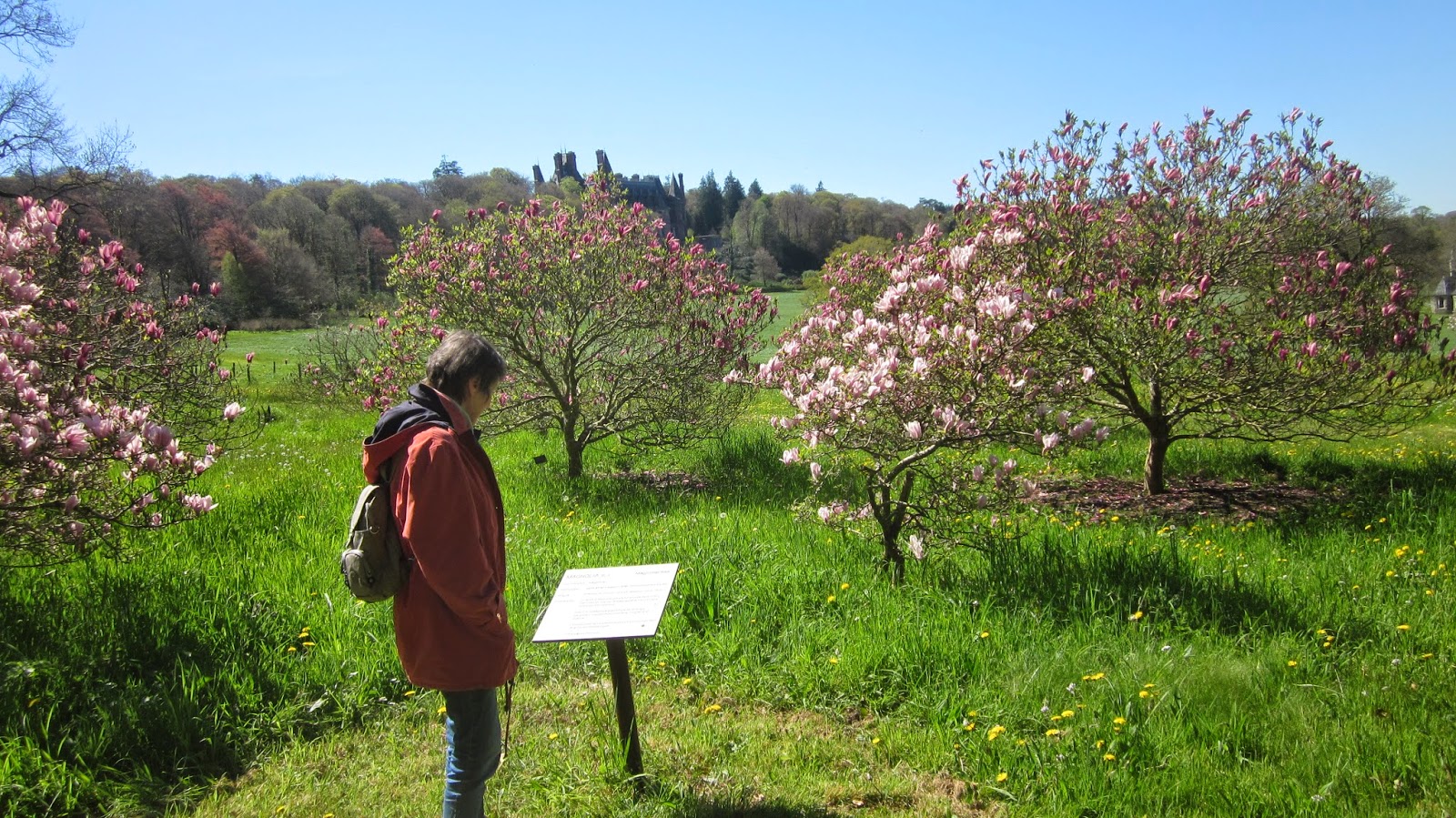 We had a good walk all round and then tea and cake in the courtyard café area. Brought back memories of working for the National Trust at Stourhead.
Posted by WM at 8:22 pm No comments:

Email ThisBlogThis!Share to TwitterShare to FacebookShare to Pinterest
Labels: Trévarez

A pleasure as ever to give a tour for the AIKB today, this time in Pays Bigouden, the south-western tip of Brittany. We started at Tronoen with one of the earliest calvaires in the region, before a visit to the remains of the WWII factory where Germans ground down pebbles from the natural sea defences of the Baie d'Audierne to use in the building of their Atlantic Wall structures. We had a picnic lunch and stroll on the beach Porz Carn, opposite the pre-history museum's outdoor exhibits, before continuing to the Rochers de St-Guenolé, a noted danger spot on this flat coast subject to mighty waves at high tides. In 1870 the family of the Prefect of Finstère were washed away as they picnicked here. We weren't.
The lethal lower rocks all around the nearby Pointe de Penmarc'h featured in Chaucer's Franklin's Tale, and we finished up beside them at the magnificent Phare Eckmuhl, built at the end of the 19th century to mitigate the threats this treacherous coast poses to passing shipping. Lovely warm, sunny day to enjoy this unusual area, which features in the Coast chapter of my forthcoming book: Brittany, a cultural history.
Posted by WM at 1:44 am 5 comments:

Lac St-Michel and the Yeun Elez 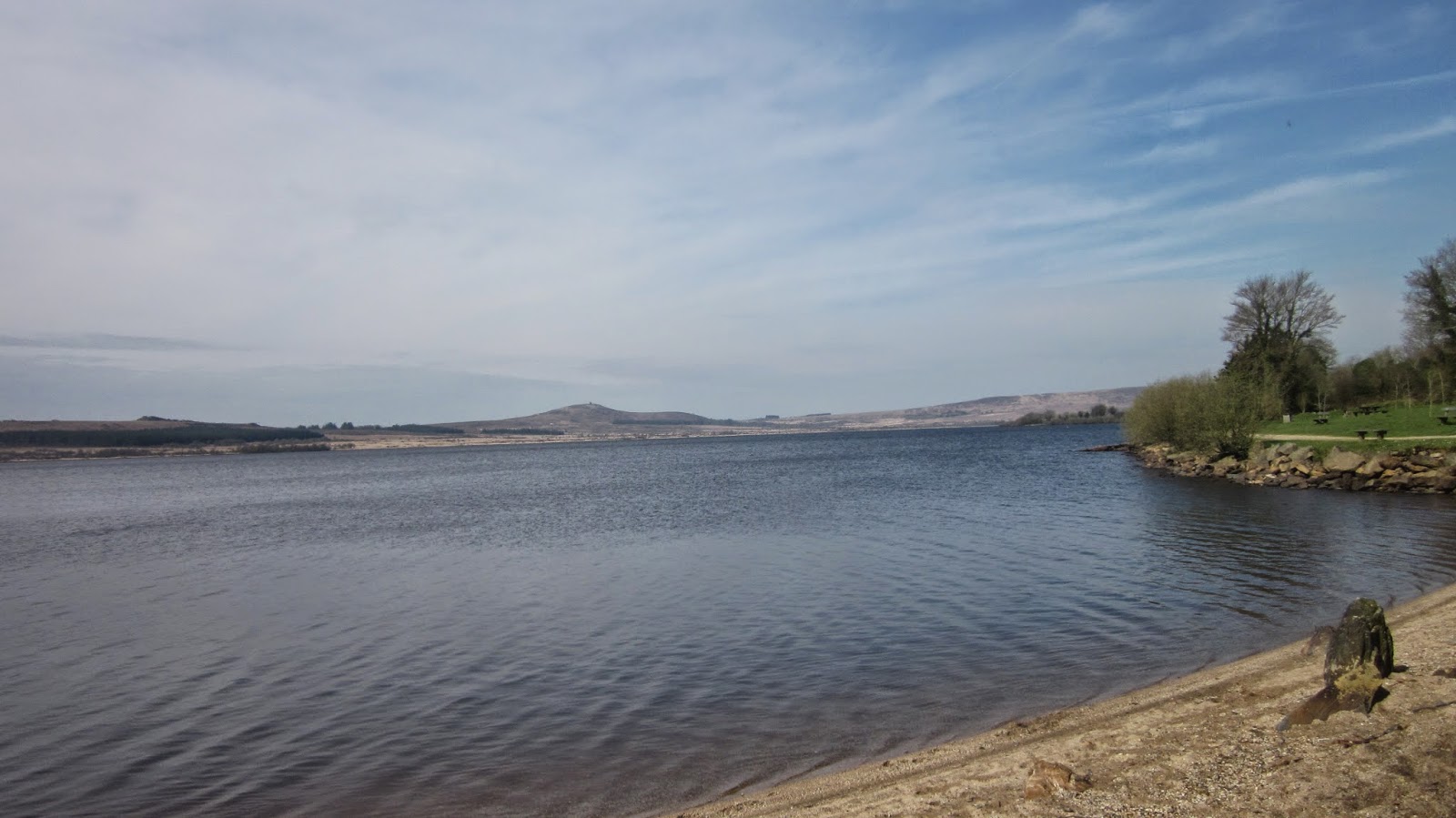 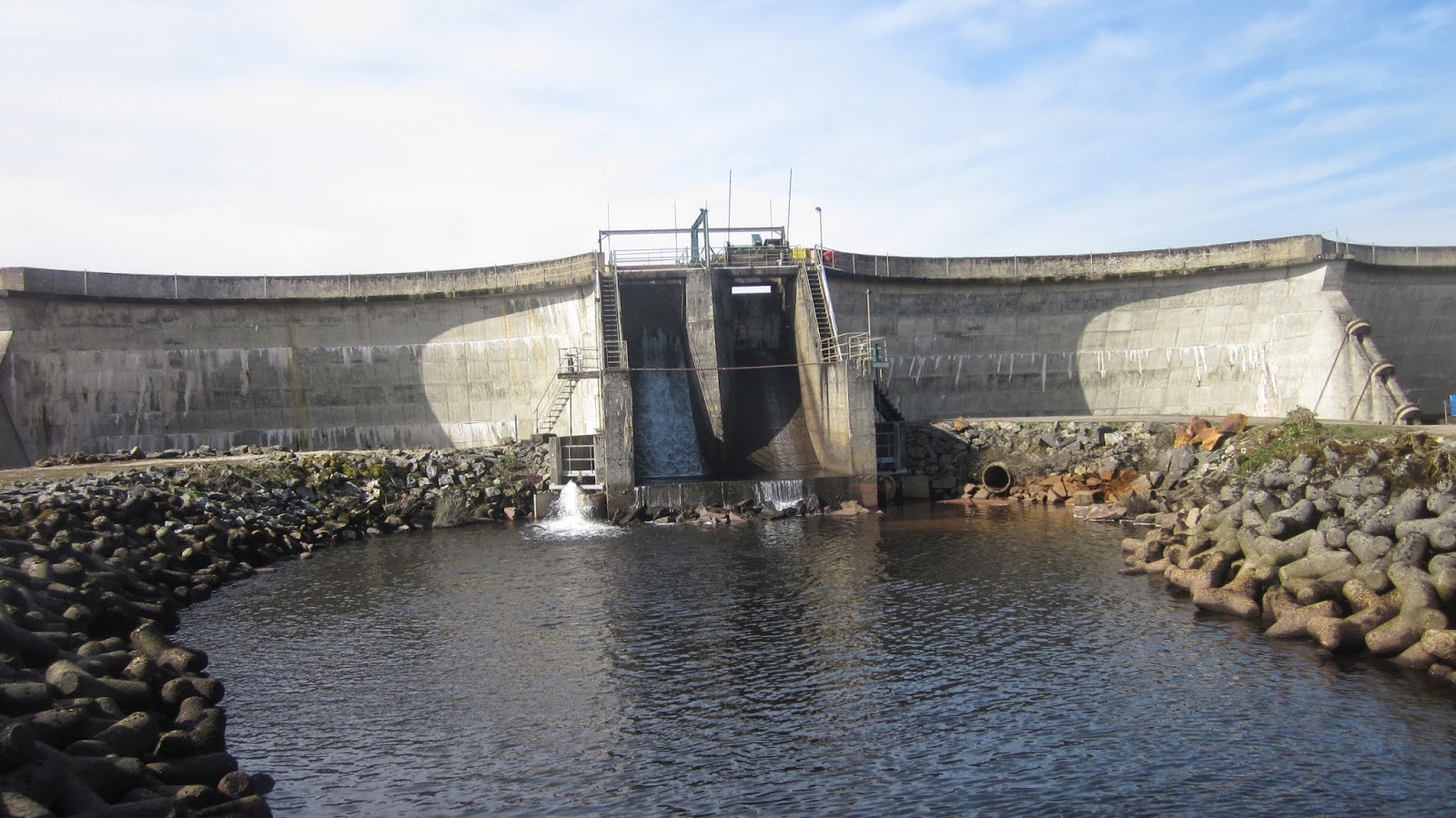 Yesterday I walked the 15km round Lac St-Michel for a GPS trace to ensure accurate maps for my Monts d'Arrée booklet, which is nearly finished. The drawback of this circuit was always a long stretch of tedious road-walking around the nuclear power-station at the Brennilis end, but this was re-worked last year to give scenic footpaths instead right by the lake and behind the barrage at Nestavel. I needed to check exactly how this all worked on the ground, and the route is indeed immeasurably improved.
The advantage of this circuit is the almost flat level of the whole thing, offering a long walk to those whose knees may not appreciate the usual very up and down Breton terrain. There are also great views of all the highest hills in Brittany, without the need to climb them. Crossing the Yeun Elez, often on wooden walkways, gives a close experience of the peaty tourbières characteristic of this area, in contrast with the upper heaths or landes. Here you are crossing the cradle of Breton legend as well as a distinctive landscape.
Posted by WM at 9:51 am 2 comments: