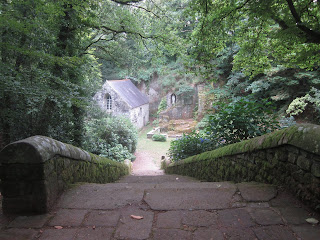 Yesterday I was in Locuon, looking at the Roman (and probably earlier) quarry which provided stone not only for the locality, but for the new town established at Carhaix, 27km away, in the 1st century AD. A Roman road from Vannes passed near the site, facilitating transport of stone blocks, and excavations of this track found parts had been paved in the same material. The sheer rock faces are like living walls, ferns burgeoning in the damp green light of the pits. The whole site has a subterranean feel as the trees close in overhead creating a sensation of being underneath a porous layer. Soft and crumbly to the touch, Locuon granite is a light grey/white in hue and smooth in texture, giving it almost the appearance of marble. 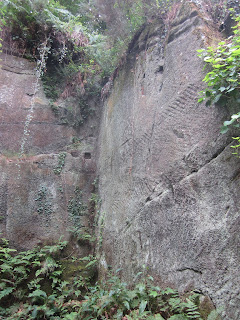 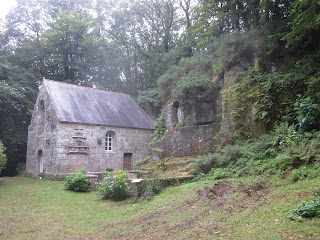 The approach is down a monumental staircase, thanks to the sacralisation of the site, with a chapel, Madonna in a niche on the quarry wall, fontaine and lavoir on a lower level. The current chapel is 17th century and shows off the potential of the building stone, but there were certainly earlier versions, as a line of probable roof support holes in the cliff behind indicates. This granite wall also includes a carved face and cross motif. Facing the statue of the Virgin Mary is the headless statue of a pagan goddess, fixed to the bottom of the staircase parapet. 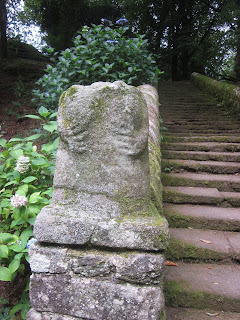 Descending to a lower level of the quarry, a spring pours out of a sculpted surround in the rock and the water is carried via a slate enclosed channel to the washing basin. Here is the first of a group of contemporary art pieces, a rather dog-like curled wolf on a platform raised above the water. Pushing further into the dells of the quarry, there are rocks incised with criss-cross pattern and, more impressively, a 'boulder' held in the thin branches of a tree. This was actually made in situ by Yuhsin U Chang, from wool over a wooden frame. 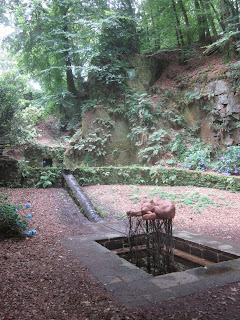 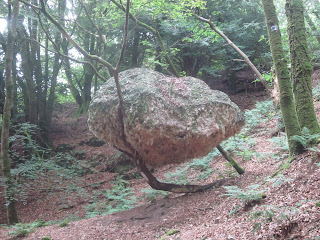 After a lengthy site inspection, I set off for a few kilometres on the former Roman road. 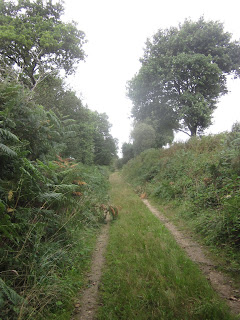 It's been a real struggle to finish the little Breton saints' guide on time, but I've never missed a deadline yet and I really need to focus now on Wayfaring in Little Britain, which calls me daily for thought and attention. There will still be editing changes on the saints to incorporate, I'm sure, but the basic text is finished and another day should see photo selection wrapped up. Luckily the cover photo almost chose itself and I'm happy that this short introduction to an enormous subject will fit well in what is almost a series, alongside the Huelgoat and Monts d'Arrée slim volumes. What's important is that they have sold in their thousands and that people really like the format and content.
A few walking trips coming up for Roman and megalithic chapters of WILB. Time to get out of my writing hut and onto the road...
Posted by WM at 10:39 pm No comments: