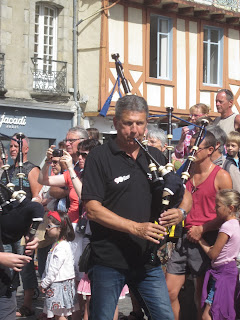 I spent two days in Quimper this week, at the fantastic Festival de Cornouaille. I watched a few bands on the outdoor stages, followed a marching bagad, saw the Breton dance classes for children and adults, learnt how the local dentelle biscuits are made and went to a conference on costumes from Pays Bigouden, an area close to my heart.

The highlight was the Barzaz concert in the theatre last night, for which I had a precious ticket. This seminal group (with the best chanteur in Brittany, Yann-Fanch Kemener) had enormous success in the late 80s/early 90s and recorded two albums before splitting up. This year they have reunited for a 25th anniversary series of concerts. I've only ever heard them on disc before but they are truly scintillating on stage, such depth of musicianship and the compelling voice of Kemener always driving the gwerziou. This is not world sound, not Celtic fusion, not fuzzy folk - this is Breton music in a pure tradition.
After the concert, I walked back through the centre at nearly midnight, head fizzing with excitement. But what struck me was the good order that still holds in Brittany. This is a huge festival and no-one was drunk or loud, the streets were calm, and cheerful goodnights came from all I passed. In Place St-Corentin there were still a few hundred people of all ages dancing in the round to the rhythm set by a pair of sonneurs on the stage. Everyone was happy. Such is life here.
Posted by WM at 9:59 pm No comments:

The art of Nantes 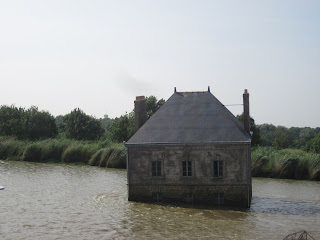 In Nantes last week for a commissioned piece and some research of my own, as the city and the Loire will figure in the River chapter of my book. I took three trips on the water, the best being a three hour journey to St-Nazaire stopping at various works of art that are part of the Estuaire creative project. Nantes never does things by halves, and this is an extravaganza by any standards, from the house half-submerged in the river to a huge serpent on an estuary beach. 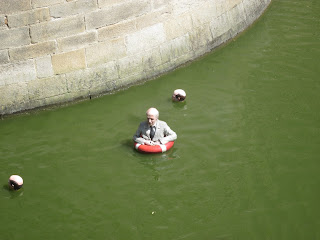 The city itself is full of visual jokes - like the 'grey men' of bureaucracy - and surprises, many with light effects designed to be viewed after dark, like the Nymphea by Corsican artist Ange Leccia. A permanent fun piece on the 32nd storey of the Tour de Bretagne 70s tower block is Le Nid, where the eponymous nest is a bar and the elongated white bird encloses broken egg tables and stools.
Nantes is a dynamic place at any time of year, but it's positively sizzling in this July heat. I came home exhausted, overloaded with art and ideas. Good excuse for a rare day off work today. 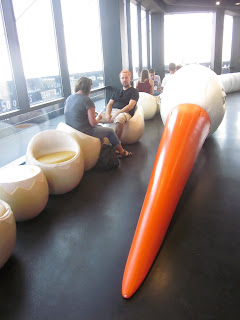 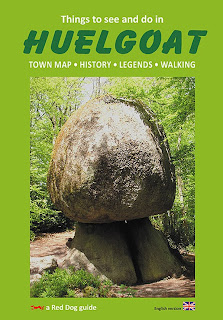 My little tourist guide to Huelgoat is out now in both English and French editions, and doing very well. It was designed to meet the requirements voiced to me by many French and British visitors over the last few years, and to provide exactly what they need for a short visit and a few varied walks. I often meet people lost in the forest because of a dearth of proper, accurate (i.e. GPSed) walking maps and am frequently asked about the history of the town, the mines, the war, etc.
I tried to respond to all this in a format that was cheap, attractive to look at and easy to handle - something that any visitor would think worth a 5 euro punt. As well as the walking maps, which at last enable people to make their own circuits, there's a good town map with facilities shown as well as sights/sites.
I'm very grateful to Red Dog Books for agreeing to publish it and my good friend Monique Le Bouhellec for her translation of my original text, and her ability to reconcile the completely different styles of the two languages for this type of production. Having a separate French edition has proved a successful gambit and one I hope to repeat next year for a different location.
Posted by WM at 3:33 pm No comments: